The director James Gunn has been rehired to make the third Guardians of the Galaxy film, eight months after Disney fired him when historic offensive tweets emerged.

Studio bosses acted quickly, back in July, when a right-wing political activist publicised ten year old messages in which Gunn made light of child sex abuse. In a string of responses on Twitter, Gunn insisted that he was no longer a provocateur and he had changed. But keen to protect its family-friendly image, Disney – which owns the Marvel franchise, let him go.

But in the days that followed, the cast of the films backed a campaign to have the director reinstated and no replacement was hired. In the meantime, rival superhero franchise DC hired Gunn to write and direct the sequel to 2016’s Suicide Squad. 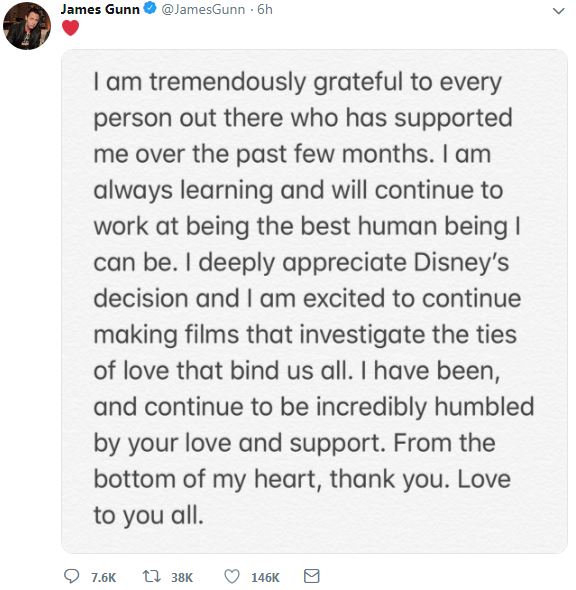 Clearly undaunted by his experience, Gunn responded to Disney’s U-turn – on Twitter – saying that he was tremendously grateful for the support he’d received, deeply appreciated Disney’s decision and was always learning.

Directors of other Marvel films have praised the decision to bring Gunn back into the fold. Ant-Man director Peyton Reed tweeted “Welcome back James,” while Scott Derrickson, who made Doctor Strange wrote “GLORY HALLELUJA.”

The eight month hiatus and Gunn’s resulting partnership with DC has put back the expected release of the next Guardians film until some time next year.

At a time when a trigger-happy Hollywood is quick to act when controversy arises, this is the first high profile example of an about-turn; whether the studio believes Gunn has genuinely learned from his experience, feels burnt by his dalliance with DC or is simply worried that no-one else will be able to make as successful a sequel, while many in the industry have welcomed the volte face, Disney could also come in for criticism from conservatives and those trying to change the industry’s perceived moral compass.