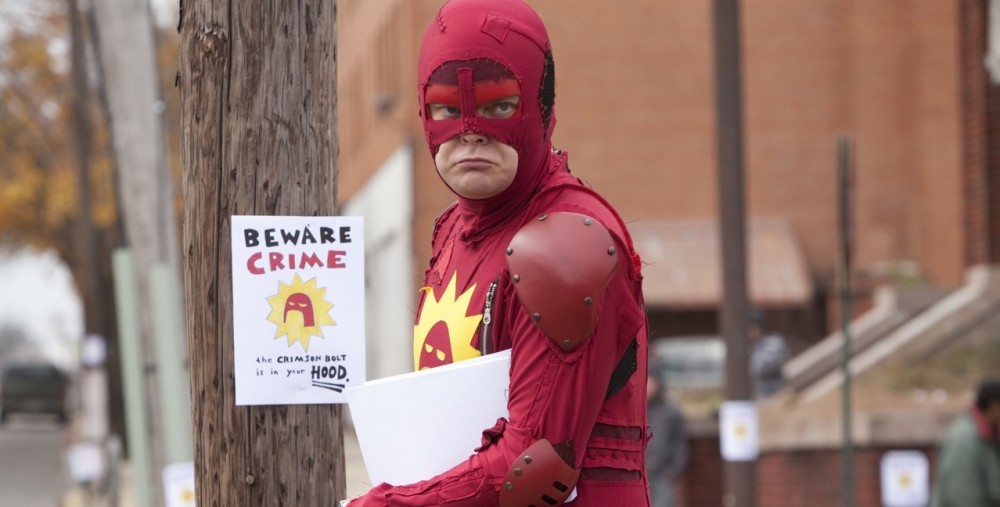 Short-order cook Frank (Rainn Wilson) is the archetypal movie loser, but he’s got just a little bit of fire in him. There are only two proud moments in his life. One, when he pointed in the direction a robber had run as the police arrived. The other was the moment he rescued his childhood sweetheart Sarah (Liv Tyler) from a life of addiction and married her.
When Sarah runs off with an ex-boyfriend – drug dealing Jacques (Kevin Bacon) – thinking the best of his wife, Frank tries to convince himself that she’s been kidnapped, but when he finally accepts the truth, he sets out to save her again.
Seeing his world – THE world – crumble around him, Frank is determined to put things right. But how does a loser cook win his wife back from a drug kingpin and his gang?
The answer comes directly from God, who appears to him one night and tells him that he’s been chosen to clean up the town.
Having no idea where to start, Frank visits a local comic store and naively asks the increasingly enthusiastic assistant Libby (Ellen Page) if she can point out any characters who fight crime without any powers.
A home-made costume, a super-hero name and a side-kick later, The Crimson Bolt sets out to clean up the town and save the damsel in distress from his arch-enemy.

The log-line of this film – a loveable loser and his young side-kick become vigilante crime-fighters, in home-made super-hero costumes with whatever improvised weapons they can get their hands on – could equally apply to the recent Kick-Ass.
While Kick-Ass is glossy and feels like a super-hero movie, Super is far darker, feeling more like a low-budget revenge drama – it’s almost more of an urban western than a super-hero film.
It’s also shocking how brutally violent this is – there’s none of the stylised violence we’ve become used to in films such as Tarantinos – when our nebbish protagonist clubs someone in the head with a monkey wrench, it’s painfully brutal to watch.
This makes the tone all the more complicated, because there is a level at which it is comic – very darkly comic, but comic nonetheless.
In the hands of some directors, this juxtaposition of unexpectedly realistic violence and surreal comedy would make a film feel a little uneven, but James Gunn ties the two personalities of his film together seamlessly.
It’s shocking – but inspiring – painful – but entertaining.
I wouldn’t go so far as to use the film’s title as a one-word review – it’s not quite Super – but it’s an impressive piece of low-budget film-making, which feels surprisingly fresh and original, despite similarities on the surface to Kick-Ass. In fact, the film which is perhaps the best comparison for this – from its gritty nature and the hero-delusions of the protagonist – would be 2006’s Special.
Its success is partly down to some effective performances – Rainn Wilson’s geek should feel pathetic, but he’s sympathetic, Ellen Page makes a faithful and excitable side-kick, the pair as deluded as each other, Kevin Bacon is as creepy, smarmy and ruthless as you’ll have seen a crime boss for a while.
Even the super-hero comic-book denouement is suitably tempered to feel more like a fatalistic drama than a fairytale.