The British star Henry Cavill has confirmed that he’s been dropped a Superman by the new bosses of the DC films franchise. 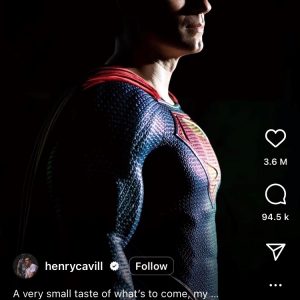 James Gunn – the director who jumped from Marvel’s Galaxy Quest films to DC’s The Suicide Squad – took over the DC Universe in late October, days after his predecessors told Cavill to announce his return to the role.

Cavill had pulled out of the Netflix series The Witcher in order to pursue the role and stated, at the time, that the patience of fans would be rewarded, in an Instagram post that has been liked more than 3.6 million times. He said he had waited to make his announcement until his cameo at the end of Black Adam had been revealed.

However, Gunn tweeted last night that the new DC slate was ready to go, but as it would be focussing on an earlier part of Superman’s life, it would not involve Henry Cavill. He said he had had a great meeting with Cavill, saying it they had discussed a number of exciting possibilities to work together in the future. 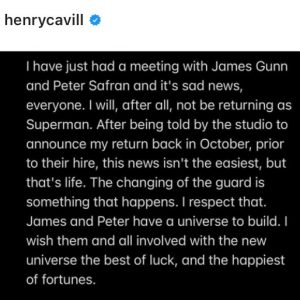 But Cavill appears to have emerged from the meeting as if Gunn had presented him with a lump of kryptonite as a leaving gift, describing the outcome as “sad news.” He said the changing of the guard was something that happened and he respected that.

With Cavill’s Superman teased as being part of the next Black Adam film and DC having more of its characters popping up in other films, dropping the star of one of its most high profile characters raises questions about how the next phase of films might relate to what’s gone before.

Gunn and his team will be hoping that the fans are more interested in the characters than the stars, and with Batman flitting from Christian Bale to Robert Pattinson and back to the 1980s iteration in the shape of Michael Keaton and his nemesis, the Joker, being played in recent films by Heath Ledger, Jared Leto and Joaquin Phoenix, it could be a gamble that will pay off.