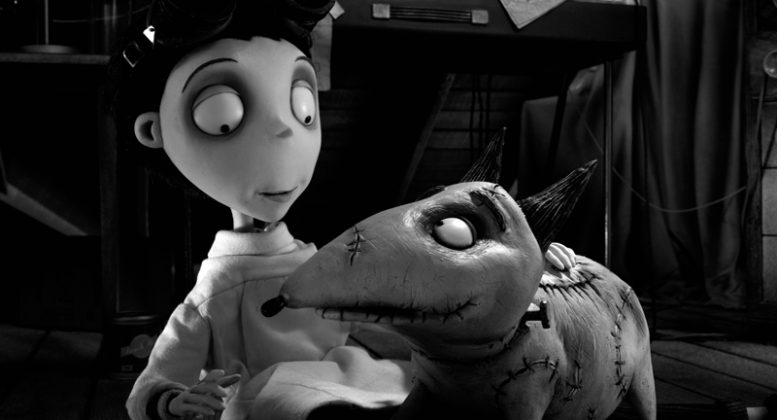 Young Victor Frankenstein (Charlie Tahan) is a bit of a loner at school – loved only by his parents and his faithful dog Sparky.

Love him as they do, his parents would rather he spent more time outside, playing with his classmates, rather than up in the attic, making his own animated films and carrying out science experiments.

His interest in the world around him is boosted by the arrival of a new science teacher – the looming presence of a creepy Vincent-Price-lookalike (Martin Landau) who frightens the parents but entrances the pupils, not least with the promise of a trophy for the best exhibit at the science fair.

Suddenly, everyone wants to be Victor’s friend. But he’s not entirely sure what to do.

Victor’s life is thrown upside down when Sparky is killed in an accident. He’s inconsolable. And so is the poodle next door. But then, in a lesson, the teacher shows the children how a bolt of electricity can make a dead frog’s legs kick.

A metaphorical light-bulb is turned on above Victor’s head. He digs up his beloved pet’s body and harnesses the energy from a bolt of lightening to see if it can fill Sparky with renewed life.

It works. But no-one can know.

Sadly for Victor, the secret gets out and suddenly, not only does everyone want to be his partner at the science fair – but they also want his secrets to reinvigorate their own dead pets.

Blatantly and lovingly recalling elements from his own childhood, Tim Burton – with his animated London Film Festival opener – revisits not only his early live-action short of the same name, but many of the old black-and-white horror flicks. From the monsters and costumes to camera angles and even the black-and-white palette, Frankenweenie is a faithful homage to the films that inspired Burton to become a director in the first place. Like Victor.

It’s a dark fairytale with all the ingredients for an effective and thoroughly entertaining children’s horror.

The plot is simplistic and visual, meaning that it doesn’t stand up to much scrutiny, but kids will be entranced by the animation and the imagination, without having to tax their minds, thinking about whether it might be possible. But although the idiosyncratic director has the chutzpah to translate the Frankenstein legend to a boy and his dog, the film less to offer adults, who’ll get little more than a enjoyable trip down memory lane.

Sparky is just as cute, dead or alive, although some of the other pets – and indeed their owners – become somewhat less sympathetic as the story rumbles on.

Oddly for a film that’s clearly a nostalgia-trip for Burton, he chose to make it in 3D and peculiarly, since it’s a stop-motion animation, the format doesn’t particularly bring the characters any more to life than their motion and the impressive voice-work from the cast.

It’s a loveable nostalgia trip that will draw in children but is less engaging for adults than most of Burton’s previous work, largely because the characterisation is ironically shallow and the narrative predictably flat for a 3D film.