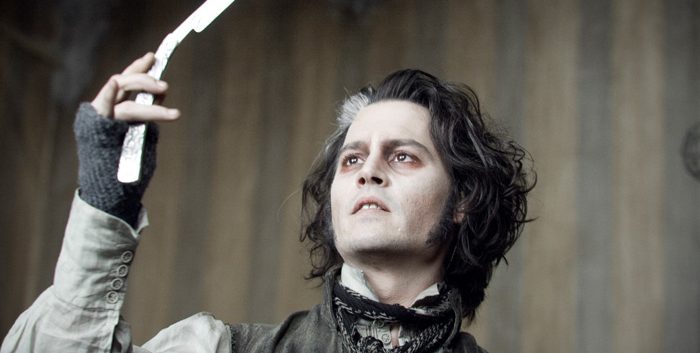 After many years away from London, a barber, Benjamin Barker (Johnny Depp) returns to the place he describes as a “great black pit” inhabited by vermin and people who are full of – well – with words by Stephen Sondheim, you can probably guess.

Using a new identity, Sweeney Todd, he’s come back to seek the wife and child who were taken from him more than a decade earlier by the ruthless Judge Turpin (Alan Rickman).

Todd heads straight for his old barber’s shop, which is now an establishment where Mrs Lovett (Helena Bonham Carter) sells what by her own admission are the “worst meat pies in London.”

After telling him that his wife poisoned herself and his daughter is being brought up by the judge, Mrs Lovett welcomes him in and offers him the room above the pie shop to use, to set up a new hairdressing business.

But he’s no longer interested in tidying up the men of London. His aim now is to lure the judge to his salon so that he can wreak his bloody revenge, offering him a closer shave than he’d like.

As he builds up to his big moment, practicing on other unsuspecting customers, Mrs Lovett takes advantage of his leftovers to improve her product.

There are few directors who could have brought Sondheim’s gruesome musical to the screen with such aplomb.

Johnny Depp’s musical performance is happily strong enough to carry the film, while Helena Bonham Carter sounds like she’s grown up with Sondheim’s music, so comfortable and natural does she come across. Sacha Baron Cohen’s eccentric turn is harder to judge, so it’s easier to give him the benefit of the doubt than it is Alan Rickman’s “Rex Harrison-esque” delivery – not that it makes his judge any less menacing for it. Timothy Spall also seems more than comfortable as the judge’s lackey.

Tim Burton stresses that he wasn’t trying to recreate the stage-play but to create a new work in its own right, and with his evil eye for imaginative imagery, this sits comfortably within the realms of the work of all those involved.

With all the blood, it’s not for the faint-hearted – and of course musicals are not to everyone’s taste.

Sondheim’s are even more of an acquired taste than others; with his overlapping melodies, dense and intense lyrics and rhymes that catch you unawares, you’ve really got to concentrate, because the songs aren’t opportunities to sit back and relax, but key drivers of the plot.

But for those who understand the music, and feel comfortable inhabiting the dark, pessimistic and surreal world of Burton and Depp, this is a cinematic treat.