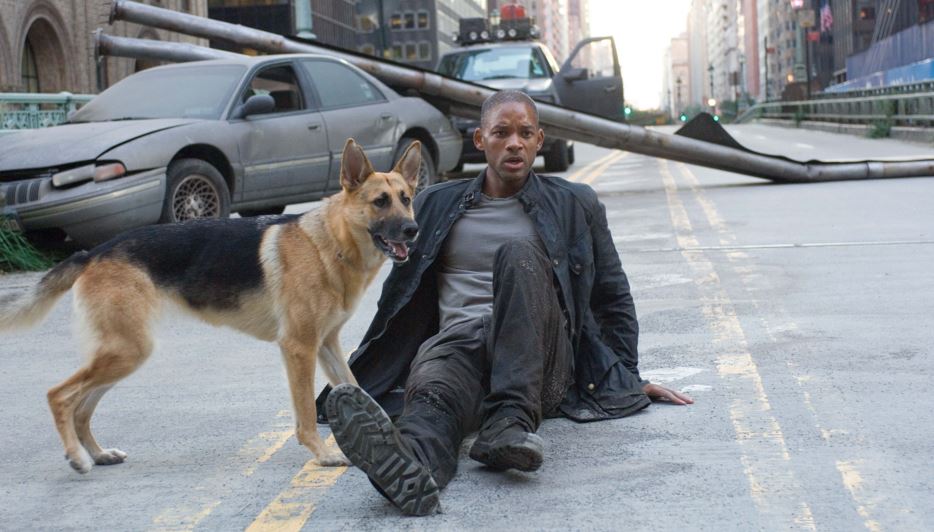 But things don’t go to plan. Soon, a terrible virus has infected 90% of the population, forcing the army to seal off Manhattan.

Then, one day, he finds out that – as the tag line of the film tells us – the last man on earth is not alone…

OK, so this might be a remake of a 1971 movie, The Omega Man, but if you think 28 Days Later, you won’t be far wrong: mad scientists inadvertently set loose a nasty virus which either kills you or turns you into a flesh-eating zombie – and you’re most of the way there.

In fact, Will Smith himself has said it was the release of Danny Boyle’s zombie thriller which held up production on this film.

“I Am Legend” is obviously a much bigger production, but many of the same elements are there – the deserted streets of an abandoned metropolis, survivors holed up in a blockaded house while zombies try to break in and rip them to shreds – so we’ve seen much of it before.

Perhaps the big difference between this and its low-budget British predecessor is the fact that in 28 Days Later, the hero was trying to flee to safety, whereas here, Colonel Neville is trying to find the cure that will save the world.

As ever, Smith makes a thoroughly likeable hero, injecting warmth and humour into the role, although with no-one to talk to but a dog, some rats and a handful of mannequins, for most of the movie, it makes it particularly tough for him to hold your interest.

While most of the science seems to fit the film’s own logic, you might wonder how after three years, there’s still enough petrol and electricity and with the only potential meat to eat being a herd of wild deer, how on earth did they get onto the island – and if they were there when Manhattan was sealed off, what happened to the rest of the animals.

This is a rather slight film in the sense that there’s not really that much going on; the brooding pace occasionally gives way to some action sequences, which are handled well enough, although chasing deer, playing golf and browsing for DVDs are hardly the ingredients of the most exciting Hollywood thriller.

There are a handful of jumps and bumps, but not much that will surprise the seasoned genre follower.

The film is perfectly enjoyable – but it’s far from legendary and is played more for thrills than it is for the serious messages it could have about the potential dangers of science gone wrong.