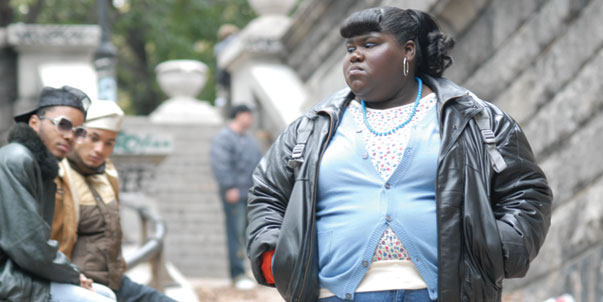 By the time we first meet obese black schoolgirl Clareece (Gabourey Sidibe) she’s already pregnant by her violent father – for the second time.
Her life is so horrific, she’s created an alternative persona whose life she can inhabit to forget about her troubles – a red-carpet celebrity she calls Precious.
When her head teacher finds out about her pregnancy, she knows she can’t stay at her school, so she urges her to attend classes for disaffected girls with special needs.
Precious’s vile and abusive mother Mary (Mo’Nique) refuses to let her do anything that’s right for her – rather than being angry at her husband for cheating on her with their own daughter, she takes out her anger on Precious for stealing her husband away from her. She bullies her daughter, both physically and mentally, lying to the social services to get welfare benefits for the Precious’s first child, who actually lives with her grandmother.
But Precious defies her mother and starts to attend classes, where an inspirational teacher, Ms Rain (Paula Patton), teaches her to read, write and think for herself and a rag-tag bag of delinquents teach her how to be herself.
With the confidence she builds up from her newfound education, she finds the strength to go to a social worker (Mariah Carey) to try to put her life on the right track, for the first time.

This film is unremittingly bleak. It begins with its protagonist living a thankless existence and like so many other dramas of its ilk, follows her as she tries to take control of her life and make something of herself.
But unlike his central character, who inhabits her celebrity world when things get too tough, Lee Daniels is a realist and as such, presents real life as it is.
Sometimes, no matter how hard you try – you can only get so far. Some relationships can’t be mended. Or at least shouldn’t be.
The central performances are outstanding. Mo’Nique’s fearsome mother is already winning her awards and stands her in good stead for an Oscar. Gabourey Sidibe’s breakthrough role is remarkably empathetic, although it’s very hard to imagine where her career can go from here.
A frumped up Mariah Carey makes a good stab at the social worker and Lenny Kravitz slums it as the mail nurse who helps Precious when she gives birth. Seeing such big names (in the world of music, at least) taking such small roles on screen is refreshing – not least because they are both every bit as believable as the actors around them.
Paula Patton is a delightful screen presence, who almost makes you wish you flunked out of school yourself, so that she could be your teacher.
There are some frighteningly brutal moments and very little humour to soften the blow. The only lighter touches come from the often eccentric fellow pupils Precious can eventually class as her friends.
From big names to small, newcomers to old-timers, the performances are universally profound – but the story itself is less so. While it feels real, you’re certainly left with the question of why anyone would want to subject themselves to such a brutal emotional ordeal, with almost no hope of redemption.
And ultimately, it’s a small film that shows us mankind – and womankind – at its worst, without actually offering us any alternative path. At least Precious has her alternative world to slope off into.