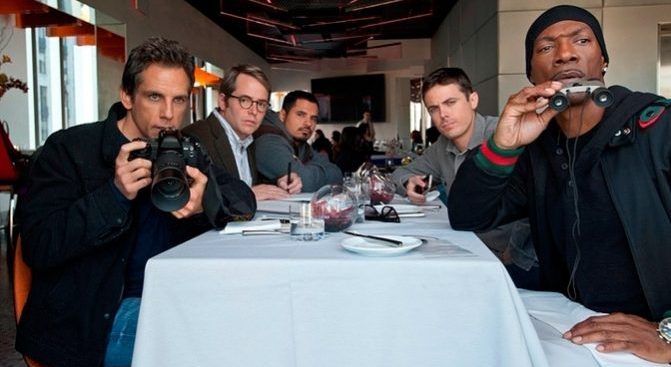 Billionaire Arthur Shaw (Alan Alda) lives in the penthouse at the park-side tower block he owns in uptown Manhattan.

Josh (Ben Stiller) manages the building from an office in the basement no bigger than the janitor’s closet, but he runs a tight ship and the staff diligently do all he asks of them.

But it’s not just about keeping Shaw and his staff happy; Josh also has to do the difficult jobs, such as reminding Mr Fitzhugh (Matthew Broderick) that the bank has foreclosed on his apartment and if he doesn’t move out soon, the bailiffs will throw him out.

Everything runs like clockwork – until the FBI (led by Téa Leoni) turn up and arrest Shaw on suspicion of stealing and losing all the money in the company’s pension fund – cash that Josh had only recently persuaded the rest of the staff to invest with their boss, having no idea that he was a crook.

The staff rise up and revolt against Josh and when he remonstrates with Shaw, Josh and his associates are fired.

When a tip-off makes Josh suspect that Shaw has twenty million dollars hidden somewhere in his penthouse, he rounds up the usual suspects to help him steal it, to give the staff back their life savings.

OK, so Josh and his team know the workings of the building back to front, but what do they know about carrying out a high profile heist?
Luckily for Josh, the local crime boss Slide (Murphy) has just returned to the neighborhood after being released from prison on bail, and he surely won’t be able to resist the whiff of a multi-million dollar bounty.

Under Slide’s guidance, the rag-tag group of receptionists, chambermaids and middle managers plan the heist of the century, right under the noses of Shaw’s remaining cronies and the FBI.

From the poster and the trailer, you’d be forgiven for expecting an out-and-out comedy – from the leading cast, Zoolander meets Bowfinger might be the mood you’d be anticipating.

But Tower Heist is – as its name might suggest – first and foremost a crime film. There’s far more intricate and explosive action than there is comedy, which is fine, if that’s what you’re expecting.

Actually – it’s not fine, because if you’re casting a crime thriller, you don’t go for Ben Stiller and Eddie Murphy.

It’s not that the pair are not funny – they are – and there are moments where Stiller, in particular, is on top form, with one-liners that deliver on the promise, but they’re few and far between, with only a handful of laugh-out-loud moments in a running time in excess of an hour and a half.

It was those rare sparkling occasions when Stiller flipped the switch into comedy mode that it hit home just how seriously everyone was taking the film.

Brett Ratner is no stranger to the action comedy genre, being the man behind the Rush Hour franchise, which makes you wonder why he’s failed to use some of Hollywood’s top comedy talent to their full potential. He should’ve just reunited Collateral co-stars Tom Cruise and Jamie Foxx.

As a heist film, it’s spectacular – if a little far fetched – but as a comedy, it’s disappointingly hit and miss.

Alda makes a suitably slimy crook and Broderick and Affleck do everything that’s asked of them. So it feels a bit churlish to mark down an adequate thriller for not being funny enough – but if you put Stiller and Murphy at the top of your bill, that brings certain expectations.

And without a comedic heart running through it, the film needs to be more coherent and exciting as a thriller.

Ratner has the right ingredients but uses the wrong recipe and bakes a mediocre cake that isn’t quite sure what flavour it is. It has the pacing of an action film, with straight-laced FBI agents and big-scale set-piece stunts and it seems that Ratner’s just hoping a sprinkling of the comedic skills of his stars will give his thriller a distinctive personality, but the result is more of a mess.

Tower Heist is entertaining, but disappointing. It’s not exciting enough as a thriller and it’s not consistently funny enough to be a comedy.