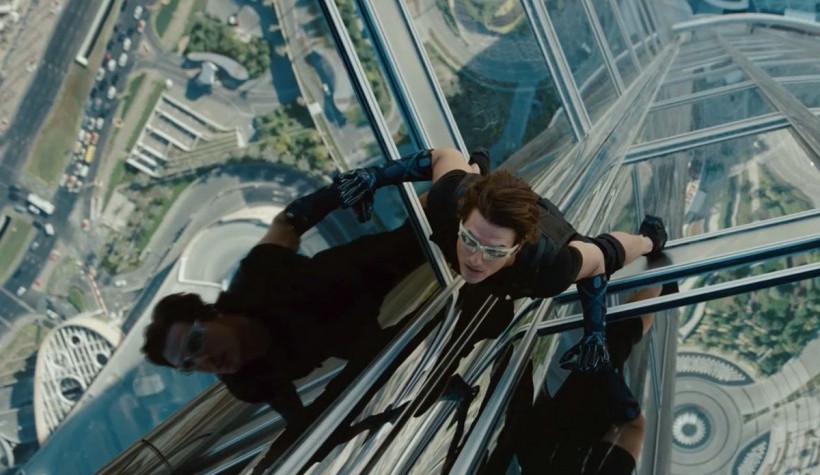 Ethan Hunt (Tom Cruise) breaks out of a tough Russian jail with a fellow inmate, with the help of his highly trained and well-equipped assistants, gadget-geek Benji (Simon Pegg) and Jane (Paula Patton).

Ethan had got himself incarcerated to try to get intelligence about an attempt to steal Russia’s nuclear release codes and now that he’s out, his team of agents has to catch the mastermind behind the plot, to prevent nuclear war breaking out.

Disguised as senior Russian military figures, Ethan and Benji sneak into the Kremlin, but before they find what they need, the mastermind blows up a wing of the building; America is accused of launching an attack at the heart of Russian political power, provoking a nuclear war.

To prevent an imminent conflict, the US government cuts off funding to Ethan’s Impossible Missions Force, so his team is cut loose – but not before the arrival of a new analyst, Brandt (Jeremy Renner).

The mission that Ethan chooses to accept is, of course, deadly, with their lives – and those of most of the world – hanging in the balance, as the team takes a world tour – meeting arms dealers and trained assassins, visiting an Indian billionaire’s palace and the tallest building in the world in Dubai, riding in high-tech trains and concept cars, using gadgets that would make James Bond wet his pants with excitement.

The plot is a bit twisted and not entirely convincing, but this film is not about the plot.

It’s about spectacle and with one of the world’s biggest (although smallest) stars climbing around outside at the top of Dubai’s Burj Khalifa sky-scraper, many of the action sequences are simply breathtaking – heart-stopping, even – particularly when you remember that Tom Cruise likes to do his own stunts.

A foreshadowed sand storm can be seen in the distance, which doesn’t reach the protagonists until the story requires its arrival, but again – who’s worried about a corny plot point when the resulting chase scene is so exciting?

As if to announce to viewers that they’re not that bothered about how seriously we take the plot anyway, the film-makers are clear from the start that the antagonists are trying to provoke a nuclear war between the US and Russia – almost quaintly passé.

With the battle raging between film-makers trying to push either 3D or Imax to the fore, this joins Christopher Nolan’s Batman firmly in the Imax camp, ensuring that the bigger-screen format truly engulfs and overwhelms its audience. With both films coming from the Warner Brothers stable, a trailer for Nolan’s Dark Knight Rises even accompanies this film.

Brad Bird – a director who’s brought us some spectacular sequences in his previous animated features, such as The Incredibles – turns an assured hand to real-life subjects and objects in his live action directorial debut. And significantly, he makes effective use of the extra content that Imax allows him.

Pretty much the first credit to appear is “A Tom Cruise Production” as the diminutive star’s new production company is born with a bang. There’s no pretending that this is anything other than a Tom Cruise vehicle; the producer and star plays the straight action hero, while most of the rest of the cast – on both sides of his struggle – are more functional cogs in his narrative machine than emotional characters; in fact, perhaps the weakest part of the film is some exposition involving the back-story at the end – an attempt, perhaps, to give them some depth, but completely unnecessary, since the journey is over by then anyway.

Mission: Impossible – Ghost Protocol is a big film – as big as the Imax screen that struggles to contain its visual ambition.

It’s silly, but tremendous fun and most importantly, it doesn’t take itself too seriously or try to be something it’s not. It sets out to thrill and entertain – an impossible mission in this day an age, perhaps, but Bird, Cruise and co accept it – and complete it – with bells on.