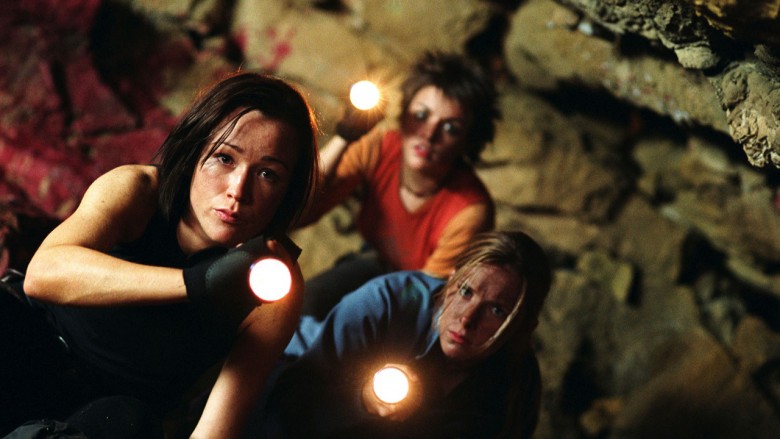 A year after Sarah’s (Shauna MacDonald) husband and daughter die in a shock accident, she’s still struggling to come to terms with the tragedy.

She joins a group of friends for a caving expedition in America’s Appalachian mountains, to take her mind of things.

But there’s more than a little history between some of these girls.

The self-proclaimed leader of the group, Juno (Natalie Mendoza), takes them off the beaten track and – as movie-lore dictates – things don’t go to plan.

The entrance to the cave collapses behind them, leaving them trapped in a network of dingy tunnels, with only a strange species of ravenously hungry humanoids for company.

Fans of Dog Soldiers – the first film from Neil Marshall – might approach this with high hopes, but what is – in effect – “Dog Soldiers, with women, underground,” turns out to be a bit of a disappointment.

Marshall clearly has more money this time, but it just goes to waste. Yes, it’s slick. Yes, you’ll jump. But it’s in no way a satisfying watch.

Unlike the perfectly-judged humour of Dog Soldiers, The Descent takes itself too seriously and the range of oddly likeable characters have been replaced by a group of bickering women, many of whom you’re only too delighted to see ripped limb from limb.

You just don’t believe that these women are really friends – and it’s not just the apparently random mix of accents (English, Scottish, Irish and American) – so you don’t believe they’d trust each other with their lives – or even want to spend more than a few minutes in each other’s company, yet we’re meant to believe they holiday together every year.

The claustrophobic environment of the tunnels gives Marshall little opportunity to do anything interesting with the camera, so it’s all rather dark and dull.

Throwing in an ambiguous ending was also quite frustrating – rather than the tantalising nature of the Italian Job’s denouement, this just leaves you wondering why you bothered watching the film in the first place.

Don’t get me wrong – it was stylish and moderately fun, but ultimately shallow and forgettable