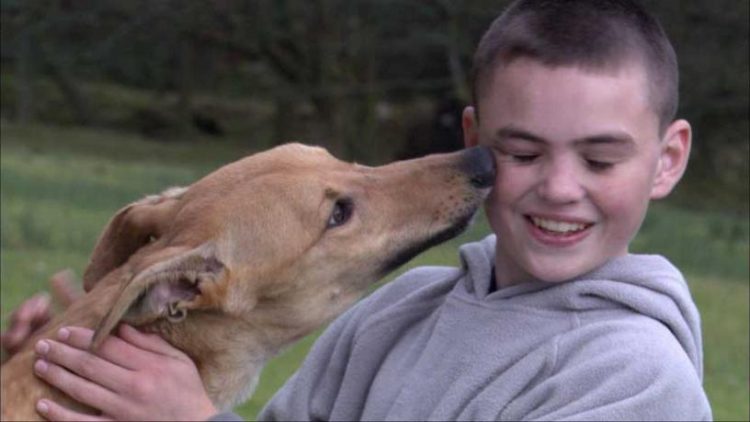 Fourteen year old Donal (Tyrone McKenna) lives with his single mother Kate (Gillian Anderson) on a Catholic estate in Belfast, soon after the end of the troubles.

Tension hangs in the air between the provisional IRA, who’ve just called a ceasefire and Real IRA radicals, who think their former comrades have sold out.

Tensions are calmed by a local passion for greyhound racing, and Donal helps local trainer – and hardliner – Joe (Ken Stott) with his dogs.

Joe agrees to let Donal keep one of the weaker dogs, if he manages to train him to win three races himself.

All is going well until a former IRA man, known only as O (Robert Carlyle), returns to the area and rekindles a relationship with Kate.

With both Joe and O vying for the father-figure role in Donal’s life, his loyalties are torn – but not for long.

Donal soon learns about life – and death – the hard way.

The drama is unquestionably strong in this well acted and well structured film – so well structured, though, that it veers awfully close to a predictable formula.

It was brave and unusual to set the film in a controversial world where the IRA are the goodies, but the politics of the rivalries between the provos and the splinter groups who think they’ve sold out, are skimmed over to the extent that they rather get in the way of the story, rather than help it along.

The political climate tended to muddy the waters and served only to equate those who support the IRA truce as the honourable good guys, while its opponents are paranoid, disloyal and sadistic dog-murderers.

The performances of the four main characters were fine – although for non-natives, some of the time the accents were almost too strong to make out.

The casting of these Belfast characters was certainly interesting, with the two men played by Scotsmen and the woman played by America’s Gillian Anderson, best known as Scully in the X-Files.

But while Carlyle and Stott both played complex characters that challenged perceptions and developed during the film, Anderson’s talent was wasted – OK, her accent was immaculate, but all she had to do was run around, being a single Mum, making dinner and being insecure. The only thing she did, with any relevance to the plot, was give birth to Donal, fourteen years before the film even started.

The film was likeable enough, but rather slight, and would perhaps be more comfortable on BBC2 than on the big screen.