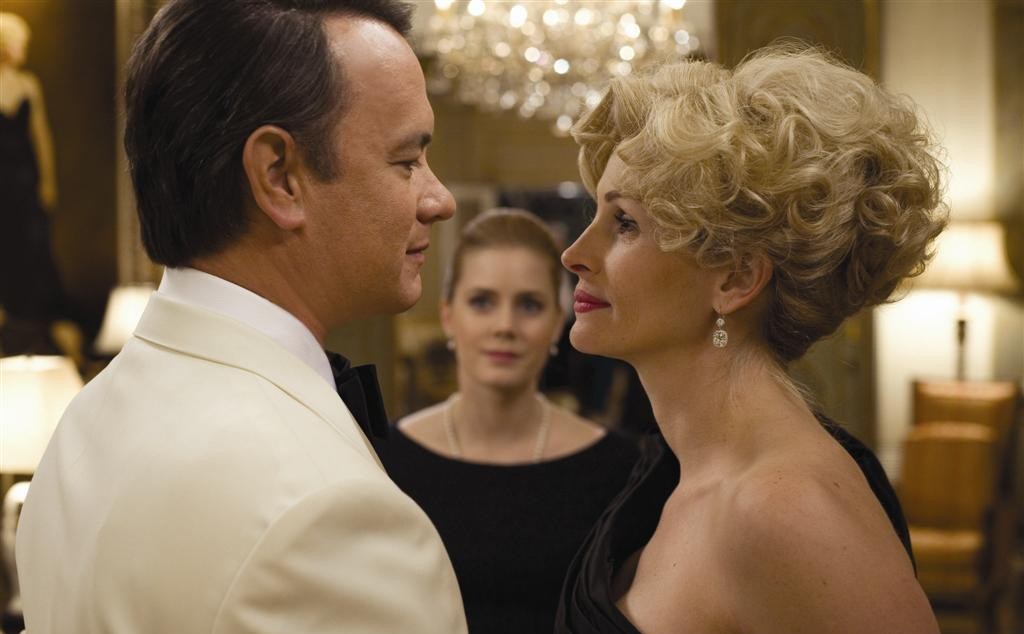 In 1980s America, Charlie Wilson (Tom Hanks) was a playboy Congressman from Texas. While relaxing in a jacuzzi with strippers in a Las Vegas bar (as you do), he sees a news report about Afghanistan’s poorly-equipped resistance fighters trying to keep Russian invaders at bay.
Later, one of his chief financial backers, socialite Joanne Herring (Julia Roberts), hooks him up with one of her best friends in the region, President Zia (Om Puri) of Pakistan (the one who overthrew Benazir Bhutto’s father).
During a visit to Pakistan, Charlie is taken to the camps along the Afghan border where thousands of people have gathered, after escaping Russia’s brutal military might. Their stories persuade him something has to be done.
Back in Washington, he summons the head of the CIA’s Afghan desk, Gust Avrakatos (Philip Seymour Hoffman), and while Charlie works on wringing money out of the government, Gust uses his contacts in the field (including Ken Stott as an Israeli spy, with an Israeli accent on a par with Natascha McElhone’s in Laurel Canyon…which, if you haven’t seen it, was undetermined until someone mentioned bagels) to buy the weapons the Afghans needed to push the Russians out of their country.
History tells us that this US battle against Russia by proxy was one of America’s more successful military moments of the Cold War. But what history goes on to tell us – although this film doesn’t – is that the after-effects of victory in Charlie Wilson’s War seem to have back-fired somewhat.

This is a curious blend of a heavy subject told with the lightest of touches.
Although it’s a film about the political wrangling to provide weapons for Afghanistan to defeat the Russians, it’s as much a thoroughly entertaining comic portrayal of a straight-talking womanising politician.
Written by Aaron Sorkin, it’s perhaps not surprising that it feels, at times, like a feature-length episode of The West Wing; many viewers will be completely lost by the complexity of which committee is providing how much money and which country is agreeing to working with its sworn enemies and why, but the choreography of the walking-and-talking (with that talking sprinkled liberally with sharp one-liners), makes this feel more like an enjoyable romp than a political thriller.
The way Charlie allows one scandal to get out of hand in order to help him get away with another adds a level of political satire to the mix, while perhaps the most riveting element of the film is Hoffman’s scene-stealing performance as the much-misunderstood CIA agent, trying to prove himself to his disapproving bosses. From Hoffman’s initial fury at being denied a promotion to his quiet delight at waiting for Wilson, surrounded by his many beautiful young female assistants, his performance is perfectly pitched and he should be a walkover for another Oscar nomination – assuming there are indeed Oscars this year.
Perhaps the film’s main weakness is a rather ambiguous political message.
On the one hand, it could be seen as glorifying American military interference. On the other, it’s clearly acknowledging that in this case, America’s actions, in the longer-term, failed.
As history tells us, the Taleban grew out of the Afghan militants who were armed by the Americans to fight the Russians, so coming from the liberal Hollywood stable, you feel a bit of “it serves you right” coming out of this.
The film seems to argue that what the Americans did wrong in Afghanistan in the 1980s was two-fold. Firstly, they failed to tell anyone it was them (being a covert operation to avoid all-out war with the Soviets), so why would the Afghans be grateful to the US when they didn’t actually know it was the Americans who freed them? Secondly, the film says the Americans should have stuck around after the military victory to help the Afghans rebuild.
Looking at, say, the current situation in Iraq, where the Americans were bold as brass in declaring that they’d overthrown Saddam Hussein, and five years later, they’re still there, ostensibly trying to help the Iraqis as they rebuild, one could argue that the message coming out of this film is somewhat flawed itself.
Perhaps the one conclusion to be drawn – both from this film and real life – is that there are no easy answers – no definitive right or wrong. I doubt the makers of this film would argue it would’ve been right to sit and watch Russia flatten the helpless Afghans into submission any more than it would’ve been right to let Hitler stampede across Europe. It’s when things go wrong afterwards that people become most critical.
Either way, it makes you think, which for a piece of Hollywood confection like this, can’t be bad.