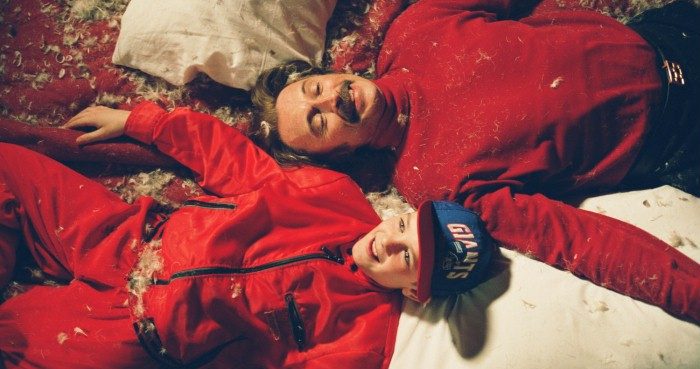 Charlie knows most of the people on the estate – some he trusts and encourages Jamie to trust – others he hides from and warns Jamie to avoid them.

Charlie is oddly furtive – as if he’s hiding from people, keeping secrets, planning something.

Jamie can’t quite work out what his father is up to. Is he a criminal? Increasingly, Charlie is behaving as if he’s a spy. But on a run-down council estate? What’s his mission?

Jamie plays along – delivering a package for his father and meeting him at the drop-off point, but when Charlie’s contact doesn’t show up, Jamie begins to suspect that maybe his father isn’t all he paints himself to be.

It’s taken eighteen months for this to return to the big screen after British audiences last had a chance to see it at the London Film Festival, at the tail end of 2008.

It’s not because it’s bad or undeserving of a theatrical release – it was picked for the LFF after all. But it might be because it’s a small film, not lacking in ambition, but failing to offer much we haven’t seen before.

The film very much centres on the father-son relationship between Charlie and Jamie and few other characters get much of a look-in.

Robert Carlyle’s increasingly delusional character is neatly balanced by an impressive debut turn from young Arron Fuller, who does a good job of initially believing his father’s stories (what boy wouldn’t be thrilled about having a father whose life is as exciting as James Bond’s?) until it slowly dawns on him that the excitement and danger in his life might not be as real as he first thought. He has to grow up fast. No child should have to put up with a father like that and his bravery is remarkable.

There are said to be echoes in this film of the writer-director Justin Kerrigan’s own childhood, which is perhaps why Jamie is the best drawn character.

But there’s almost nothing original about this film – we’ve seen people running around sink estates, father-son relationships, delusional losers many times before – and the fact of just bringing these familiar themes together under one title fails to offer them a new twist.

There’s no single moment on which the plot turns, so it unravels slowly and purposefully, so by the time the fact of what happens is confirmed, you’ve long since had a chance to work it out. And the back story behind that fact is revealed through one of the most clunky pieces of exposition in recent years – and when you learn the truth, it feels so unconvincing as to be a disappointment.

Arron Fuller delivers a heart-wrenching powerhouse of a performance – but there’s little else to distinguish this film.