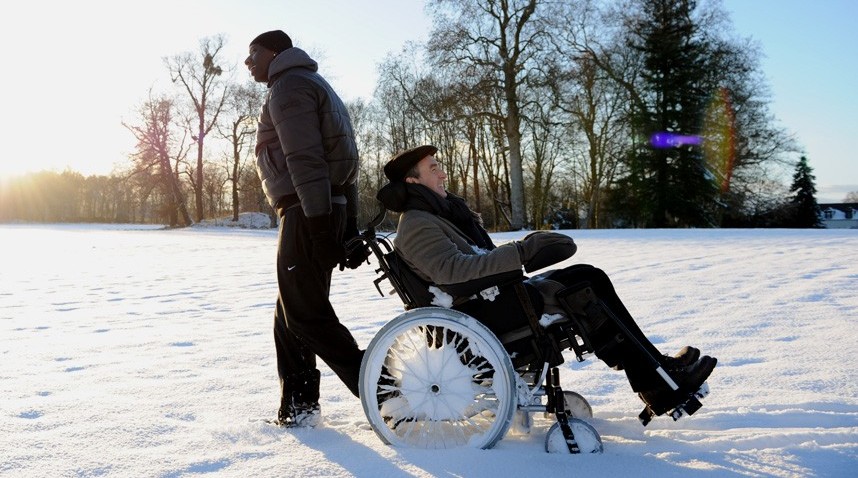 Philippe (François Cluzet) is a multi-millionaire Parisian, paralysed below the neck since a paragliding accident.

During the interview process for a new carer, one candidate after another lines up to tell him and his assistant Magalie (Audrey Fleurot) how nice they’ll be to him.

Suddenly, a Senagalese immigrant and former criminal Driss (Omar Sy) bursts into the room to get a signature on a form to prove that he’s applied for a job so that he can keep claiming benefits. He shows no interest in the job or in Philippe. He does show interest in Magalie, though. Philippe tells him to leave his form and come back for it the next day.

When Driss returns, he’s given a tour of the palatial home, including a sumptuous en-suite bathroom he can have to himself if he has a go at the job. A life of luxury, even if it involves carrying a quadriplegic into the shower every day, is better than a life on the streets, after his mother kicked him out of her overcrowded apartment, so he agrees to a trial period.

What Philippe sees in Driss – with not one day of work experience to his name – is his unsentimental approach to life, his lack of pity and his craving for excitement. Soon, Philippe is smoking dope and speeding around the streets of Paris in the Maserati that’s been covered up ever since his accident. He’s experiencing life again, and at the same time, teaching Driss a thing or two about music and art.

Before you shout “That would never happen!” remember that this is, of course, “based on real life,” like so many other films whose plots seem to stretch credulity.

There’s not really that much happening here – apart from the coming together of two contrasting characters and a bond developing between them. Narratively, it’s a simple tale, but its tremendously well told.

Every step of the way, the two key performances lift the spirits of everyone on screen as much as those in the audiences.

As Philippe manages to tame Driss and teach him about taking responsibility for those he loves, without Driss even realising he’s being lectured, Philippe himself is learning about the lives of the kind of people his previous life of wealth kept at bay. But for a man who’s stuck inside a useless body, not too far removed from the locked-in-syndrome explored in another recent French gem, The Diving Bell and the Butterfly, his encounter and blooming friendship with and mentorship of Driss gives his life renewed purpose and a sense of fun he thought he could never enjoy again. Driss’s lack of tact even encourages him to explore the yearning to be loved in a way he’d long since given up on.

In some senses, this takes the compassion – but not pity – from The Diving Bell and the Butterfly, blends it with the culture and class clash of Trading Places and wraps it around the classic buddy comedy.

There’s warmth and there’s fun – but many of the gags seem calculated and some of the set-ups seem a little anachronistic; Driss must be the only street gangster in 2012 Paris to listen to Kool & The Gang – a more appropriate choice of music might not have enabled the film to sell so well.

In a bold film that finds humour in disability – or at least the perception of the world to it – the characters are so well drawn and while the story is simplistic and somewhat shallow and doesn’t teach us much about the world, except by challenging all the usual stereotypes, the performances bring a bristling script to life and we’re treated to a thoroughly enjoyable, feel-good film.

While Sy – with his naivety-fueled unbridled sense of fun – is the only one involved in this to convert a Cesar nomination into an award, it’s Cluzet who deserves perhaps the most praise for delivering a highly entertaining, complex performance with just his eyes and mouth.