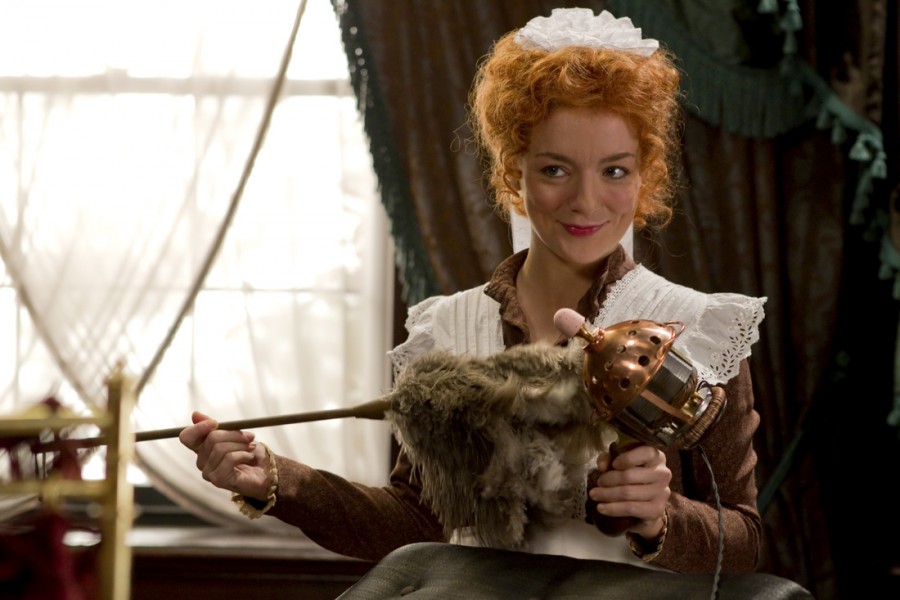 In 1870s London, Mortimer Granville (Hugh Dancy) is an honourable doctor. His hospital is less honourable, so they part company, leaving him looking for work.

The only job he can find is with one of the capital’s leading doctors specialising in treating women, Robert Dalrymple (Jonathan Pryce). The pair spend most of their time treating patients with a range of symptoms – such as nervousness, insomnia, exhaustion and depression – which are lumped together under the title “hysteria.”

The treatment consists of massaging their – well – downstairs private bits – in such a way as to calm them by giving them what, today, could be euphemised as sexual pleasure, for want of a better phrase. Soon, the new arrival at the surgery is delivering so many paroxysms to the satisfied patients that he starts suffering hand cramps.

Luckily, his friend Edmund (Rupert Everett), who spends most of his time inventing useless contraptions, is working on a mechanical duster; it’s not long before the pair realise that the technology, with its vibrating snout, could be put to better use.

Once again, we have a film that begins “Based on real events…” but at least this one has the chutzpah to add “…really” to the overused phrase.

Sadly, for what’s clearly meant to be a comedy, this “afterthought” gives rise to probably the biggest laugh in the film.

That said, there’s much warmth and good hearted humour here – the kind of humour that – especially given its period setting – you could share with your parents and grand-parents, were it not for the fact that it’s a film about female orgasms and vibrators, which rather makes you wonder what the target audience is.

Both examine the social and sexual politics of the time, but it’s not biting enough to be an effecting satire.

And while the former is an entertaining comedy, as the need for the new contraption and its invention and testing emerge – particularly thanks to the input of a madcap Rupert Everett and a hapless Jonathan Pryce – what’s certainly meant to be a romantic comedy simply doesn’t work. It’s as predictable as it is unbelievable at every turn, but worse, it’s neither romantic enough nor funny enough.

Like so many films of its kind, the sumptuous costumes, sets – and importantly here, the props – are right on the button but the plotting feels contrived as it strives to make its points.