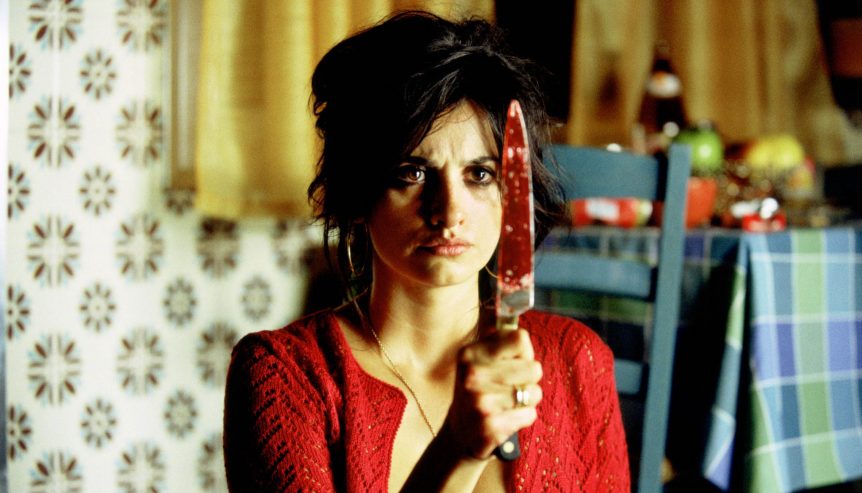 Every now and then, Raimunda (Penelope Cruz) returns to the village where she grew up to tend the grave of her mother, Irene (Carmen Maura). Taking her daughter Paula (Yohana Cobo) and her sister Sole (Lola Dueñas), while they’re there, they visit their friends and family who remain.

Chief among them are Aunt Paula (Chus Lampreave), who’s so old and infirm, she really shouldn’t be living on her own.

She reassures them that she’s OK, saying gets help from Irene. In truth, their friend Agustina (Blanca Portillo) looks in on her from time to time.

Back home, Raimunda is struggling financially, not least because rather than looking for a job, her slacker of a husband is more interested in watching TV, drinking beer and fantasising about his own daughter.

One day, Raimunda returns home to find her dead husband’s blood on her daughter’s hands – the last thing she needs, while dealing with this mess, is a call to say that Aunt Paula has died, but that’s what she gets. The unfortunate “accident” means she can’t even attend her beloved Aunt’s funeral, so Sole goes alone.

There, Sole is rather stunned to encounter her mother – suddenly, the idea that Irene was helping Aunt Paula makes sense to her. Irene appears to have returned from the dead to help those she loved in life. In return, Sole agrees to help her by taking her in, but Irene is adamant that Raimunda shouldn’t know she’s there.

Agustina, meanwhile, is urging Raimunda to help her find out what happened to her own mother, who disappeared several years earlier. Could the death of Raimunda’s mother and the disappearance of Agustina’s be linked?

It’s one of those plots that’s difficult to summarise, but actually, it slots together quite logically and neatly.

As ever, Almodóvar has a masterful control of his material – all his materials, in fact, from the script and the camera to the sets and the Cannes Best Actress-winning ensemble cast – all of whom deliver impressive, oddly believable performances, in the circumstances.

In some ways, it’s typical Almodóvar – with strong female roles, boldly surreal moments, shamelessly idiosyncratic with the past coming back to haunt the present. But in other ways, it’s very un-Almodóvar – mostly dull hues, rather than his usual multicoloured spectacles and very linear structure with rather too much clumsy exposition.

When we find out – to misquote one of the director’s own film titles – all about their mothers, it actually comes as a relief and returns the film to a more recognisable world.

Despite its twists and turns and elements which seem to be rather far-fetched, the story does work rather well, but the way it unfolds is neither as clever nor as satisfying than you’d normally expect from the Spanish maestro.

At times, it seems – rather than an attempt to entertain an audience – like a love-letter from daughters to mothers everywhere.

Volver is the Spanish for “return” – referring, of course, to Carmen Maura’s character – but it applies equally well to her as an actress, returning to work with Almodóvar for the first time in nearly twenty years.

In many ways it’s an interesting and intriguing film – but it’s far from his best. No doubt he will “return” to the top of his form before long.