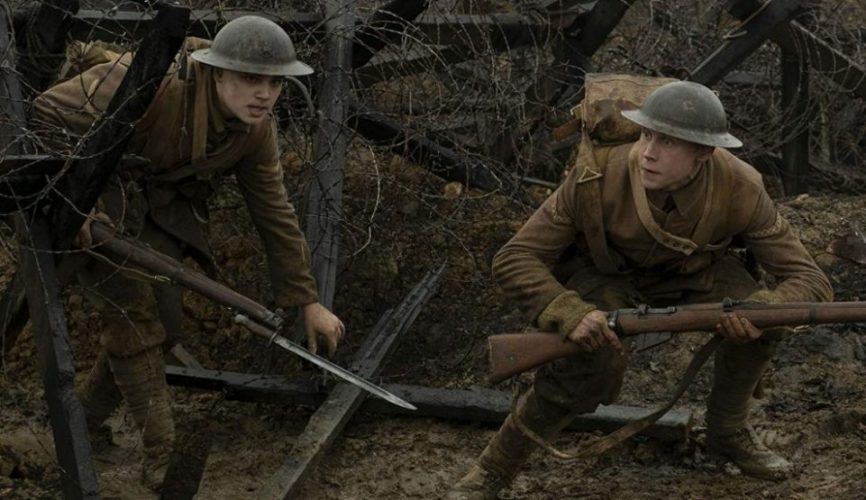 It’s 1917 and on the frontline, Lance Corporals Schofield (George Mackay) and Blake (Dean-Charles Chapman) are picked for what seems like an impossible mission.

General Erinmore (Colin Firth) informs them that nine miles inside No Man’s Land, Colonel Mackenzie (Benedict Cumberbatch) is preparing an attack on retreating Germans. But new intelligence has revealed that the enemy isn’t in retreat at all; the Colonel’s 1600 men are being lured into a deadly trap and with all communications down, there’s only one way to warn them – on foot.

The general sends the pair deep into enemy territory to deliver the message to call off the attack – but they’ve got only a few hours to get there and failure to succeed will mean the almost certain death of Blake’s brother (Richard Madden), a Lieutenant under General Mackenzie..

Even before Lance Corporals Blake and Schofield set off on their mission, Sir Sam Mendes has already gripped you with his First World War epic, the claustrophobic trenches almost suffocating you as they head off to receive their instructions.

Before long, you realise that you’ve been watching a single take – or at least what appears to be. The technique inserts the viewer into the story – there aren’t just two people on this dangerous journey; you’re travelling with them. They’re holding onto their weapons for dear life – you’re doing likewise with your seat.

At times, the camera trick feels just a little showy, but it immerses you in the narrative and leaves you no-where to run – there’s nowhere else to look, nothing else to see.

There’s only one obvious moment where the screen fades to black – other than that, you’d need a finer eye than mine to spot the joins.

The cinematography can’t be faulted – although when it’s at its most beautiful – rather than the starkness of the trenches, the tunnels or the carcass-strewn wastelands – you assume it’ll be a dream-sequence, but somewhat incongruously, it’s not.

There are also a couple of plot points that don’t quite feel right – whether it’s characters doing things that, in the circumstances, you don’t think they really would – or whether they’re not doing the obvious things that you’d expect them to do – there’s a tendency towards the melodramatic. And given that the film is ostensibly shot in real time, they cover nine miles on foot remarkably quickly.

But in the context of such an engaging adventure, it’s easy to forgive any such narrative follies.

Based on tales he was told by his own grandfather, who fought in the trenches, the story at its core is simple – a British Saving Private Ryan, that could equally have been called Saving Lieutenant Blake.

Unlike many war films, the story is so personal that it doesn’t feel at all jingoistic, but like many other war films, it plays like a Who’s Who of British actors, with bit parts from Colin Firth, Benedict Cumberbatch, Mark Strong, Richard Madden, Andrew Scott and Daniel Mays, among others.

But it’s the intensity of George Mackay at the film’s pumping heart that matches the power of the newly knighted Sir Sam’s direction that will grip you from start to finish and have you leave the cinema feeling like you’ve fought a war – and won.

It’s a film that’s almost always “on” – there are few moments where the action slows down long enough for you to catch your breath – it’s adrenalin all the way, with almost no time for emotion – so on those brief occasions when it pops up, it’s all the more potent.

It’s rare to see such a bold film that dares to make a visual statement and shakes you to your core – it’s a film where the style and the substance very much elevate each other.

And while there are some beats that require a little more suspension of disbelief than you might like, those handful of moments that take you out of the action and roll your eyes will soon be forgotten, as it’ll be only a matter of seconds before you’re pulled back in to continue the thrilling ride and it’ll be another half an hour or so before you realise you haven’t taken a breath.