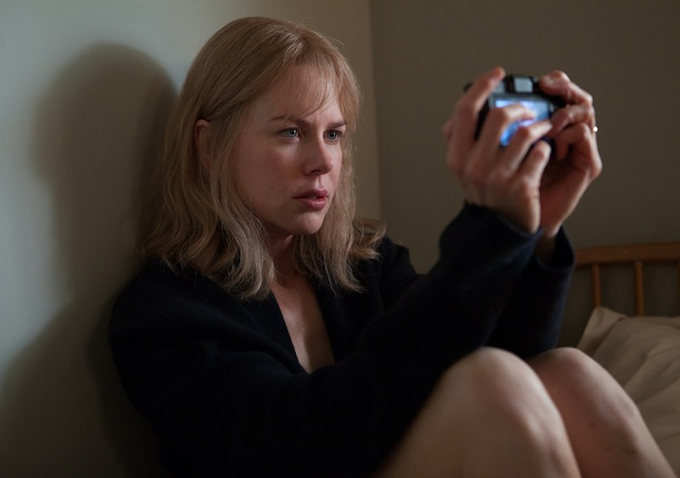 Christine (Nicole Kidman) wakes up confused. She doesn’t recognise the man in bed with her. She slips out of bed and heads to the bathroom, to find the walls covered with photos and labels. The man in her bed appears to be Ben (Colin Firth), her husband.

But she doesn’t remember.

It seems that a traumatic event, several years earlier, left her unable to recall anything that has happened before she last went to sleep.

Her therapist, Dr Nasch (Mark Strong), has given her a camera for her to record a video diary, so that when she wakes up each morning, she at least has an idea of what has been going on in her life.

As her treatment progresses, the odd flashback from her former life triggers memories that she has to record as quickly as possible, before she forgets them. But joining the dots doesn’t prove easy.

With each day and each new experience, Christine starts to question whether she can trust Ben, her therapist, or her former best friend Claire (Anne-Marie Duff), who’s mysteriously re-entered her life.

Films about memory loss are nothing new and with Nicole Kidman’s protagonist forgetting what she’s learnt every time she falls asleep, her inability to retain new memories inevitably draws unfavourable comparisons to Christopher Nolan’s more ambitious, more imaginative and more convincing Memento, not least because tattooing feels more cinematic than talking to a camera.

As such, it feels like it should be aiming to be more ambitious. It takes more than two Oscar-winners to make a familiar premise feel fresh.

An evidently low budget restricts Before I Go To Sleep to a key cast of just four and only a handful of locations, with most of the action taking place in Christine’s house, although the subject matter does lend itself to a degree of agoraphobia.

It unfolds rather too slowly, with not enough happening, most days, to hold the viewers’ interest from one sleep to the next.

Necessarily, the performers, while effective enough, have to play their roles as blandly as possible, so as not to betray the twists and turns to come.

If you don’t try too hard to decode what’s happening, this can be enjoyed as a slick and stylish but simple drama.

However, much of the narrative unfolds a little too conveniently or fails to convince at all, not really standing up to full scrutiny. Christine’s timely recollections seem to be driven by the plot, rather than naturally inspiring and informing the story; she remembers just what she needs to for the following scene to work. But being one of those cases where it’s based on a book, if it’s a faithful adaptation, that can’t really be blamed on the film-makers. Often though, in such cases, it’s easier to maintain an air of mystery on the page than on the screen, where there are too many clues or distractions.

Now, I’m no psychologist but I wonder what Dr Nasch would have to say about the fact that the point of her life from which she can’t remember anything is not the same as the point at which the incident occurred that gave her amnesia. Perhaps that’s perfectly normal, but viewers might expect a causal connection.

Before I Go To Sleep is a slow-burning psychological thriller that gives you so long to think about all the possible outcomes, that by the time it eventually fizzles out, the denouement won’t be a surprise; worse, you’ll be anticipating another twist – that never comes.