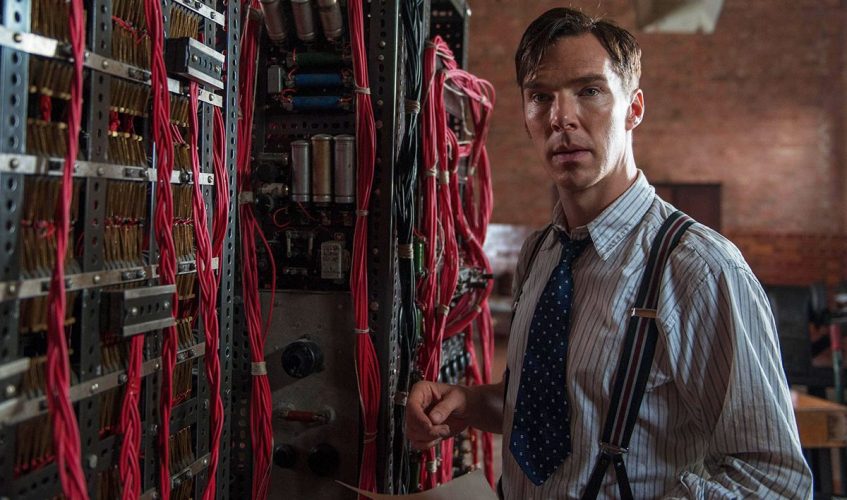 The Second World War isn’t going so well for the allies. The Germans always seem to be a step ahead, thanks to their Enigma coding machine, that allows them to send instructions to units in the field.

The head of Britain’s Bletchley Park government listening centre (Charles Dance) recruits the brightest minds in the country to try to crack the Enigma code, so that the allies can find out what the Nazis are planning to do before they act.

One of the team is Alan Turing (Benedict Cumberbatch), a fiercely intelligent but fiercely independent mathematician, who’s supremely confident in his ability to solve the puzzle, but his eccentricities always keep his colleagues at arm’s length – except for one; Joan Clarke (Keira Knightley) is excited to have been chosen by Turing to join the team and soon becomes his closest – even only – friend.

For some, it’s about winning the war. For others – well, Turing – it’s more about outsmarting the Germans intellectually than militarily.

But while the work is set to seal Turing’s legacy, it’s the personal side that will have the greater impact on his life. Back then, homosexuality wasn’t just frowned upon; it was illegal. And despite going down in history as the man whose code-breaking skills shortened the war, saving thousands of lives, when the authorities eventually found out about his sexuality, a criminal conviction and chemical castration followed.

There are two remarkable tales to tell about Alan Turing – how he beat the Nazi Enigma machine and how he was driven to kill himself after being convicted of gross indecency and it took decades before he received a formal pardon.

One of these stories is eminently cinematic – the other less so – and the first issue with this film is that it tries to portray three distinct periods of Turing’s life. It centres on his wartime heroics, flashes back to his schooldays, when he first became aware of his sexuality, and looks ahead to his eventual arrest, conviction and sentence.

And the film-makers have decided to shake it all up a bit, starting with a break-in that led to his arrest, flashing back to his arrival at Bletchley Park, flashing back further to his childhood, on a convenient cue in the screenplay, and then flitting back and forth. The depiction of wartime is the most important and most successful section of the film, while the flashback to his schooldays is a useful window into his psyche, but significant as it is to Turing’s life-story, the later scenes involving interrogations at the police station lack drama and feel superfluous. The film ends with a series of captions anyway, so one extra caption saying “he was convicted of gross indecency” would have sufficed.

Rather than the episodic approach, perhaps more useful would have been to see what he got up to between the war and his arrest – becoming the father of modern computing, by all accounts, compounding his legacy. But this would also have given us a chance to know him as a person. Did his professional success make him happy? Did he have relationships? Was he generally depressed and lonely? What actually drove him to suicide, more than a year after he finished his sentence? Simply suggesting that one of the greatest minds of the twentieth century killed himself because of his conviction feels like a simplistic and blunt narrative tool.

While the story is totally unique, and Morten Tyldum’s handling of showing us bright people thinking is more thrilling than it has any right to be, the code-breaking segment of the film does feel familiar; with the blinkered and mentally fragile but brilliant mathematician of A Beautiful Mind, Mark Strong’s MI6 man lurking in the shadows, Charles Dance’s pompous military man, Keira Knightley’s prim and proper princess and necessarily, production design that looks like any other World War Two film. Only Turing’s splendid code-breaking machine, named Christopher after the love of his life, gives The Imitation Game something visually fresh.

The screenplay is, perhaps, the weakest element of the film, from the structure to some corny dialogue, stereotypical or ineffectual supporting characters and clumsy dumbing down, presumably for dramatic effect.

Benedict Cumberbatch’s performance is fascinating – he’s not frightened to portray this war hero as a selfish and thoroughly unsympathetic character, quite possibly, it seems, driven by other people’s lack of understanding of what appears to be Aspergers, given his complete inability to empathise with anyone else while being brilliantly focused on using his skills to their maximum.

The film raises many interesting issues – not least MI6’s reticence to use the information they learn once the code is broken, lest the Germans realise they no longer have an advantage. It shows Hollywood that it was actually the Brits that did it highlights the little-mentioned suggestion that the Enigma code was cracked as much by German stupidity and complacency as it was by Turing’s genius.

It also paints an unflattering picture of a Britain where male chauvinism was accepted, although it doesn’t seem to see this as any kind of scandal. But the issue that’s clearly more important to the production team – the consequences of Turing’s homosexuality – is almost overlooked on screen. For something that was such a key part of his life that it led to his death, we don’t really see him either struggling with it or embracing it; it’s mentioned here and there and alluded to, but the film-makers themselves seem to be almost as frightened of it as 1950s Britain.

Seen through modern eyes, his treatment at the hands of the law seems preposterous – pumped with oestrogen as an alternative to jail, simply for engaging in homosexual acts. Some people have argued that it’s an indictment on British society that it took so long for him to be pardoned. Indeed, the whole 1950s segment of the film seems to turn it into a campaign message for liberalising gay rights rather than the story of an unlikely war hero; and is the film arguing that because he cracked the Enigma code, he should have been allowed to break the law of the land at the time?

It’s been argued by many, that since he’s been pardoned, so should the thousands of other gay man who were convicted – and by extension, anyone who was ever convicted of anything that it no longer a crime. It’s also worth bearing in mind that at the time of his conviction – and for many decades afterwards – his wartime code-breaking was protected by the Official Secrets Act, so those who believe he should have received special treatment need to understand that in the early 1950s, no-one even knew what he had done.

The Imitation Game is entertaining and it’s important for people to know Turing’s story. But whether it’s an important film is less clear. It’s a war film with sociopolitical undertones, but set in a different time, it’s perhaps unhelpful to judge history through modern attitudes and sensibilities. A film that raises current scandals can act as an effective campaigning tool but with the final inequality – marriage – recently being undone, many decades after the other battles have been won, a campaigning film seems somewhat pointless.