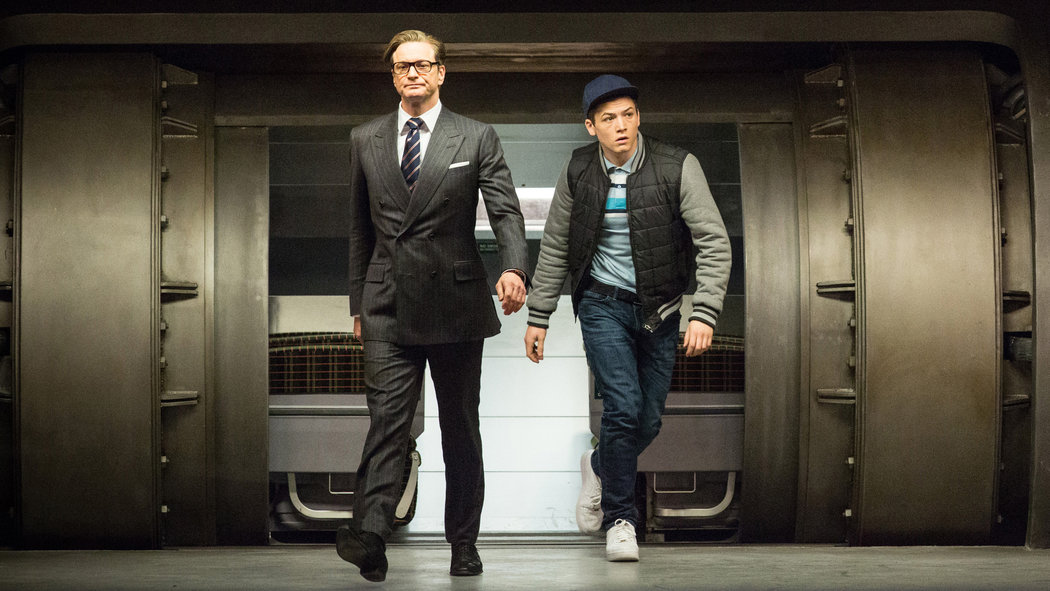 With Lancelot dead, the freelance secret service called Kingsman needs to hire a replacement and each member gets to select a candidate.

Out of the blue, Harry (Colin Firth), or Galahad, as he’s known by his fellow agents, hears that the son of the last candidate he chose, for a tragic mission seventeen years earlier, needs a hand. As the man in charge when things went wrong, Harry feels that it’s his responsibility to help Eggsy (Taron Egerton) out of a hole.

Although this council estate teenager, who spends most of his life on the wrong side of the law, is far from the refined Oxbridge and army type more suited to being a Kingsman agent, Harry sees potential in him and picks him as his unlikely candidate to challenge for Lancelot’s seat around the – well – oblong table.

While the shady organisation’s technical wizard Merlin (Mark Strong) is putting the candidates through their paces, Harry and the boss, Arthur (Sir Michael Caine) are trying to find out who’s behind the scientist’s kidnapping and why, to scupper whatever plans they might have – and to avenge Lancelot’s death.

Kingsman is to spy films what Kick-Ass is to superhero films, which perhaps isn’t too much of a surprise, given that the two films share a director (Matthew Vaughn) and writer (Jane Goldman), from a comic book by Mark Millar.

In both films, Vaughn, Goldman and their favourite actor Mark Strong explore worlds in which independent crime-fighters are given the freedom to decide who is right and who is wrong. In both films, the morality of legislation – whether domestic or international – is in the hands of a bunch of unregulated megalomaniacs, however well-meaning.

But while the provenance of the central characters is certainly questionable, nothing can take away from the fact that Kingsman is thoroughly enjoyable – sprightly direction, tightly edited, speedy entertainment that doesn’t give you much of a chance to stop for breath, which is just as well, because in the few lulls where you have the opportunity to consider the plot, it generally falls apart.

The way the Kingsman organisation operates is consistent to a point – with a gentlemen’s tailor’s shop as a front and the prerequisite secret lair buried many metres below the surface – but certain elements of the group, from the training and selection to its general operation, seem oddly incoherent or so unlikely as to make suspension of disbelief impossible.

It’s more of an homage to than a parody of Bond-style spy films, hard as it is to parody a genre that already features every gadget imaginable, and bad guys with plans for world domination. While, at times, it can feel a little corny or even predictable, there are a handful of moments where the filmmakers play with the expectations of audiences, every bit as familiar with the spy world as they are.

As well as presenting itself as a slick action comedy, the film – admittedly bluntly – has a go at tackling social prejudice, as it highlights the fact that you don’t need to be born rich to succeed.

The plot ratchets up to a particular point where its flamboyance is enthralling – the extreme violence is as balletic and stylised as fans of its predecessor would crave – but from that moment, the narrative begins to unravel as the team throws everything it can think of at the screen as everything careers towards an increasingly over-the-top denouement. But even then, it would be churlish to turn against it.

But narrative nonsense apart, the sheer chutzpah of Vaughn & Co makes for an unashamedly entertaining experience. Kingsman is a film full of superlatives – not all good – it’s totally silly and completely over the top but exceptional fun.