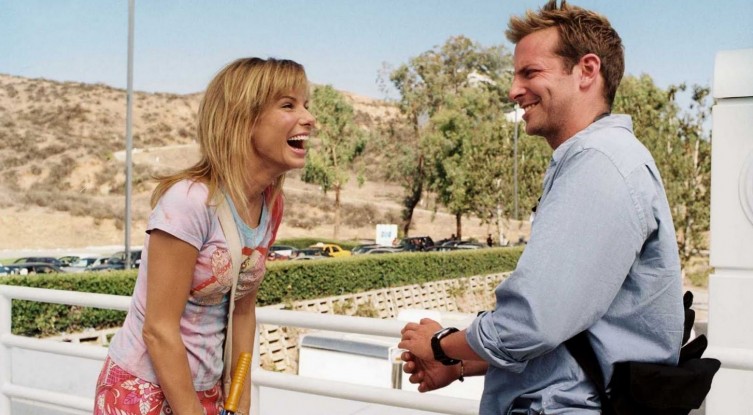 Kooky crossword compiler Mary (Sandra Bullock) is too busy working to settle down and find a man.

She thinks her job is all she needs anyway, until a careers talk at a local primary school makes her realise that maybe it is about time she met someone.

She’s normally very picky, being so bright that her brain contains more than the combined knowledge of every TV quiz compiler on the planet, but after the children made her feel even smaller than them, she decides to throw caution to the wind and accept a blind date being forced on her by her parents.

He’ll probably be a waste of space anyway, right? Then they’ll leave her alone for a while.

But when TV news cameraman Steve (Bradley Cooper) turns up at the door, even she can’t resist his charms, and within minutes, she’s all over him. Literally.

He’s a little taken aback and thanks his lucky stars when the TV station calls to send him to some far-flung location to film some news. Immediately.

Convinced that they’d hit it off, a dreamy Mary, on cloud nine, compiles a crossword that’s “all about Steve,” which doesn’t go down too well at the paper, so she soon finds herself with a bit of time on her hands. What to do? What to do?

She decides to set off on a journey across the country to find her man and win him over once and for all.

With false encouragement from TV reporter Hartman (Thomas Haden Church), Mary – in a world of her own – has no idea that her amorous advances could – in the wrong circumstances – make her come across as a stalker.

Oh dear. 2010 got off to a pretty good start for Sandra Bullock, with three lead actress nominations – two at the Golden Globes and one at the Screen Actors Guild. Then along comes this pig’s dinner of a film to bring her back to earth with a bump.

What was she thinking, signing up to this? As both as actor and producer, she can’t even blame anyone else for this unholy mess.

It commits the two biggest crimes any so-called romantic comedy can commit – there’s no romance in it and it’s simply not funny. It’s embarrassing, watching Sandra Bullock tottering around on her heels, as if she thinks she can do farce. She can’t. Not here, at least.

The problem is, we’re being asked to follow main character who’s as irritating to us as she is to the victim of her stalking.

There is almost nothing likeable about her at all – certainly not about her personality. We don’t engage with her and we certainly don’t care what happens. If she got arrested for stalking, it would at least mean we could get up and go home.

Her only redeeming features are the fantastic legs she shows off wearing a very short skirt and the dimples in her naïve cheeks look quite cute.

But film-makers need to learn that it takes more than great legs and cute dimples for a romantic comedy to hit the mark.

And they should learn that kooky doesn’t equal funny – or indeed endearing.

The story is unbelievable and nonsensical – even within its own world – a world in which beautiful people in the media can’t find dates without being set up by their parents and where supposedly highly intelligent people interpret people running away from them as fast as they can as the height of attraction.

The situations they find themselves in are beyond the realms of coherence – you’d get more sense reading the cross-word.

Apart from her legs and her dimples, the only redeeming feature of this film is Thomas Haden Church, whose overbearing and narcissistic, yet cheekily loveable TV reporter is the only source of any humour.