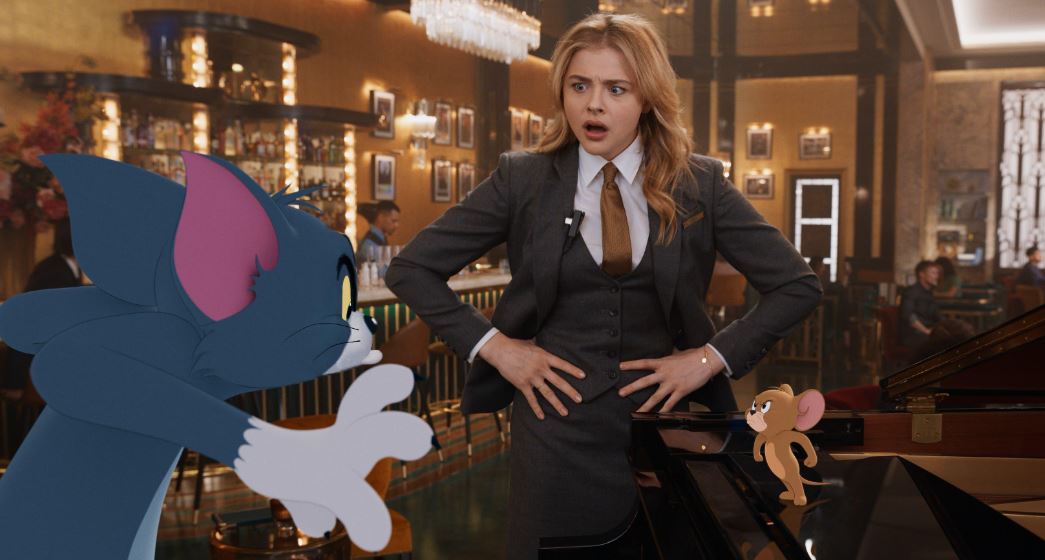 Kayla (Chloë Grace Moretz) is down on her luck and needs a new job. While hustling for freebies in a luxury hotel, she finds out that it’s hiring staff for a huge celebrity wedding and she manages to talk her way into a top job.

The hotel manager (Rob Delaney) is somewhat more supportive of Kayla than the events manager Terence (Michael Peña), who sees his own job coming under threat from the charming newcomer, each time the happy couple approve of something she does.

But with the big day just around the corner, a mouse is spotted, and it wouldn’t look good for New York’s top hotel to have a mouse problem, with the eyes of the world about to fall on it.

Kayla comes up with the idea of getting a local alley cat to catch the mouse, but with these perennial foes being reunited, you can be sure this won’t go smoothly.

Trying to reach an audience of Tom & Jerry fans – going back generations – Warner Bros have made some interesting and unexpected decisions – chief among them, giving us a blend of animation and live-action and making the eponymous pair supporting characters in their own feature.

Tom and Jerry – and a range of other animals, including the celebrity couple’s pets and a pair of elephants hired for the ceremony – are animated against the real-life background of a New York hotel and its patrons and staff.

And it feels a little odd for a film called Tom & Jerry to be “about” a young woman trying to prove herself in a new job. They’ve almost been written out of their own story.

But this isn’t a character-driven drama – it’s meant to be a comedy, with a handful of tongue-in-cheek gags that will hit home with parents – and, oddly, film industry insiders – but most of the attempts at humour feel tired and arch and the lazy underlying plot wouldn’t interest a three-year old.

Setting a classic cartoon against the background of modern celebrity culture could have worked – but such a story probably shouldn’t have been centred on a hapless hotel worker. Somehow, it just doesn’t add up to the sum of its parts.

The highlights are unquestionably the familiar antics of the titular pair, as Jerry does untold damage to Tom, whether it’s by dropping bowling balls on his paws, electrocuting him or making him plummet several floors. That said, seeing the cartoon-violence happening against the backdrop of the real world makes Tom’s fate seem even more cruel than it would in the classic TV shows.

And such noisy hijinks clearly can’t go on for a full hour and a half – which begs the question of whether a feature film is the right outlet for these characters.