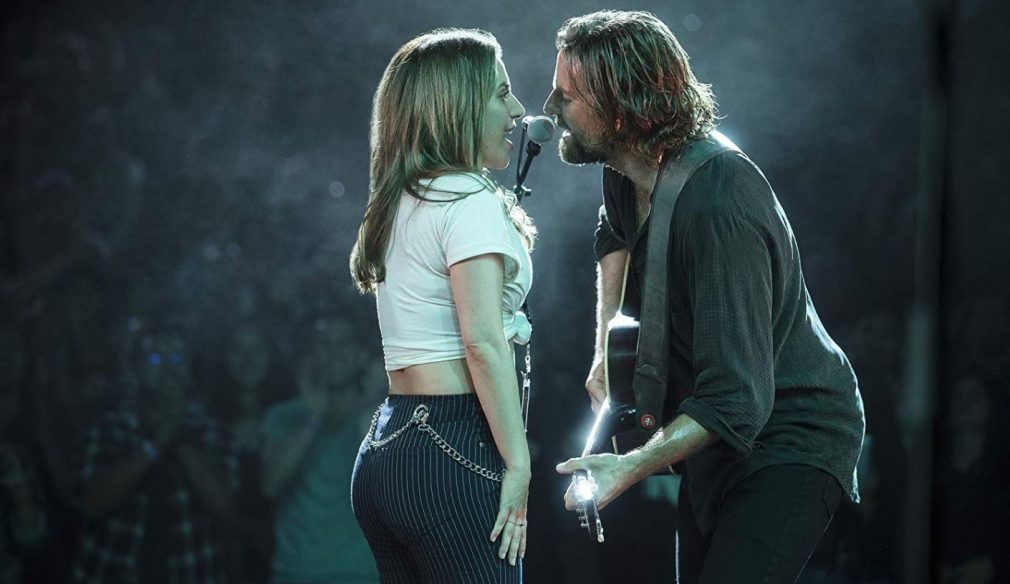 By now, it’s a familiar story – an older male star discovers a young female performer, nurtures her and sees her career bloom while his own spirals into oblivion.

It’s familiar, not least because this is the third remake of the 1937 film of the same name – let alone the many other films of differing titles that explore the same territory.

In this particular case, the older male star is the veteran country rock singer Jackson Maine (Bradley Cooper), who’s still got it – still filling venues on nationwide stadium tours. But he can’t do it without the help of pills, booze and lines of white powder.

When he runs out of drink in his limo after a gig, he stops at the first bar he finds – which turns out to be a drag bar. He’s cool with that – especially since the top of the bill is actually a woman, Ally (Lady Gaga), who – it’s immediately clear to see – is wasted as a waitress in a local hotel.

Showering her with praise, Jackson invites Ally to join him on stage at his next gig – and, as the title suggests, a star is born.

But at the same time, another star is dying – as Ally’s star is rising, drink and drugs are taking their toll on Jackson and his career; by the time she wins her first Grammy award, he’s become an embarrassing shadow of his former self.

On his first time out as a director, Bradley Cooper takes an oft-told tale and – in the words of an X-Factor judge or two – makes it his own.

The film is clear awards bait, but in truth, rather than mimicking Ally’s Grammy success, this remake is more suited to the humiliation of Jackson’s addict.

Except in two areas – and for a film like this, they are at least crucial areas: the acting and the music.

Cooper himself is an impressive screen presence as the ageing rocker, supportive and sympathetic, talented but modest, popular but damaged. He passes as a rock singer too. Perhaps, in that sense, Cooper is the star that’s born.

Lady Gaga, in her first major acting role, is surprisingly confident and convincing, especially given how she’s replaced her real-life flamboyance with everyday girl-next-door modesty.

And whether it’s Jackson’s country-rock or Ally’s pop, the original music is already deservedly doing good business in the soundtrack charts.

But the story-telling itself is alternately ill-judged, off-paced, anachronistic and formulaic?

“How can I show my character has a problem with addiction?” struggles the earnest but naive first-time director. “I know. I’ll have him take some pills before going on stage in the first scene and swig the dregs of a bottle of booze after coming off stage at the end.”

Admirable as their performances both are, the chemistry between them doesn’t ring true. It feels like a creepy old man, letching over a girl, young enough to be his daughter. Me too? She would no doubt have respected him and appreciated whatever help he was prepared to give – but marrying him?

The casting choice makes it a little hard to accept; this isn’t some innocent ingenue who needs a little coaching to release her full potential – even without her wildly idiosyncratic public persona on screen, this is Lady Gaga…THE Lady Gaga, not for nothing one of her generation’s most accomplished performers.

The story itself doesn’t sit as comfortably now as it did in the 1970s, 50s or 30s, when the support of a successful man was almost essential to kick-start the career or an ingenue. These days, anyone with half a notion that they might fancy a taste of stardom wouldn’t be headlining a drag show but auditioning for X Factor.

A particularly corny character is misused, as a smarmy British manager (Rafi Gavron, with a character name more befitting a Batman villain) swoops in and steals the starlet from her mentor, insisting that she swaps her rock-chick image for that of a dancer-backed pop-queen, but the potential for social commentary is eschewed in favour of dramatic expedience.

And when Jackson’s motivation is at its most narratively crucial, Cooper films the entire scene from the knees down. There might be a school of thought that warns against over-acting and being too on-the-nose, but no-one’s ankles, not even Cooper’s, can engender sympathy for a fading star.

Usually a drama with a character arc like Cooper’s will incorporate a tale of redemption but given this film’s predecessors, Cooper the director is obliged to pile on the melodramatic denouement, leaving you feeling pity, rather than honour.

It’s all a bit of a shame, because implausible as they often are, the hugely uplifting opening few scenes, in which a star is born, are compelling and thrilling in an escapist fantasy kind of way, but somehow as the feelgood film gives way to the “star is dying” drama of decay, it feels like it’s just ticking boxes, and often the wrong ones.