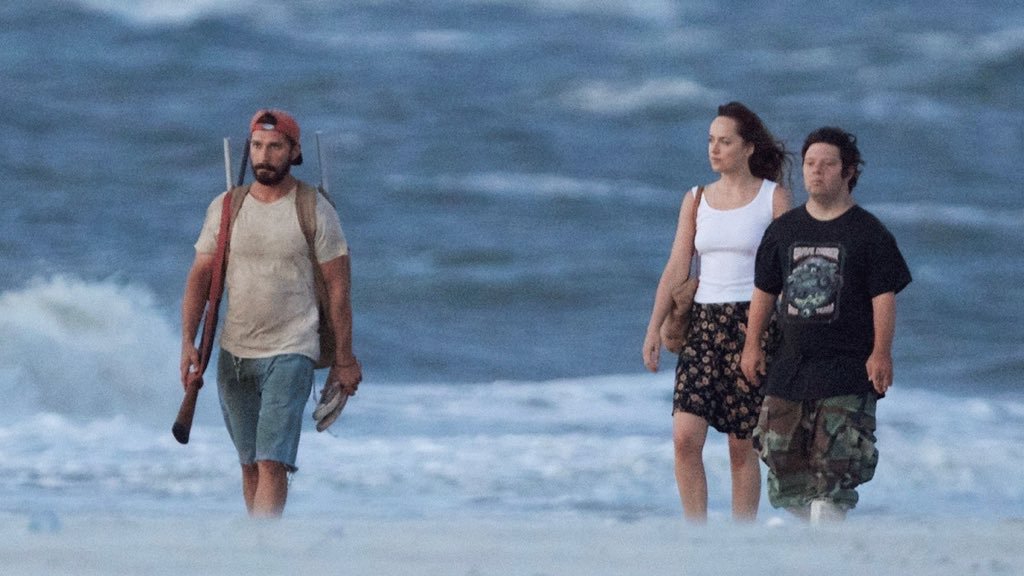 Zak (Zack Gottsagen) is an early twenties man with Down Syndrome, no family to look after him and no money to support himself. The state of North Carolina is obliged to care for him and the only place they can find is an old-age home, where he’s looked after by Eleanor (Dakota Johnson).

A resourceful young man, Zak has already made two attempts to escape, to pursue his dream of becoming a wrestler, but each time, he’s been caught and brought back. But it’s third time lucky.

Tyler (Shia LaBeouf) is a dodgy crab fisherman who gets into trouble for selling without a licence. When he’s literally kicked out of town by a rival fisherman, Duncan (John Hawkes) and his henchman Ratboy (Yelawolf), he sets fire to their stock on the way out.

As Tyler is making his escape to Florida, he finds Zak hiding in his boat. Initially worried that Zak will hold him back, he dumps him at the first opportunity, but after a change of heart, he warms to his new travelling companion and promises to help him reach the wrestling school he dreams of attending.

But before long, Duncan and Ratboy are hot on Tyler’s tail and Eleanor is closing in on Zak.

There’s not much original in The Peanut Butter Falcon – apart from a title, which will be explained midway through – and a central role for a character with Down Syndrome – but the familiarity doesn’t make it any less enjoyable.

Two underdogs come together – one naive, the other a cynic who quickly warms to his new acquaintance – become friends, set off on an adventure together that wouldn’t be out of place in a Mark Twain novel, and unwittingly help each other’s emotional development – all while their respective pasts are trying to catch up with them.

The structure is straight out of a screenwriting book – first we meet Zak, then we meet Tyler, then we see that Zak is unhappy, then we see that things aren’t going so well for Tyler, then comes the inciting moment when the odd-couple meet and the gentle road-movie – on a river – begins in earnest. There are even a handful of flashbacks, just to give us a little back-ground to the unusually sensitive but typically troubled LaBeouf.

Apart from the hoods. hot on Tyler’s heels, without exception, both the two central characters and everyone they meet on the way is pleasant, polite and helpful, which takes much of the peril out of the narrative, but this is more about character than drama and in that sense, to care about the protagonists – and those around them – it helps if you like them.

It might seem unlikely that the thieving Tyler’s attitude towards Zak’s prospects in life are more progressive than those offered in the care system from which he’s running, but the simplicity and convenience of the plot simply carries you along comfortably, as if you’re drifting down the river on the raft they use for much of their journey south.

It’s an unremittingly feelgood tale, with an upbeat atmosphere and a positive message – narratively slight and ultimately a little insubstantial – but The Peanut Butter Falcon is undoubtedly a wholesome piece of Sunday afternoon family entertainment that will give you hope for humanity, without feeling too preachy.