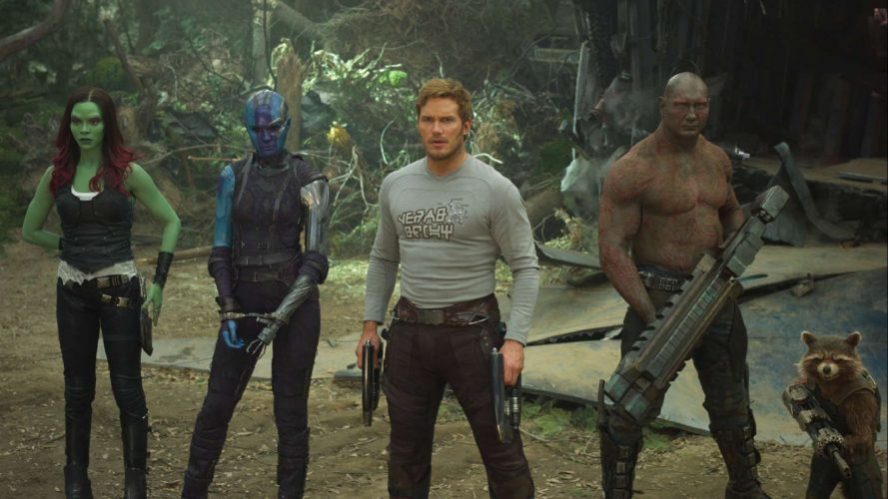 Peter Quill/Star-Lord (Chris Pratt) and his band of misfits, Gamora (Zoë Saldaña), Drax (Dave Bautista), Rocket (voiced by Bradley Cooper) and Baby Groot (voiced by Vin Diesel) are back as bonafide Guardians of the Galaxy protecting the universe.

But Quill’s world suffers a major upheaval when he is finally reunited with his long lost father Ego (a magnificent Kurt Russell) who certainly lives up to his name.

It is quite difficult and rare for a sequel to match, let alone surpass the original, particularly when it stormed the summer box office (in 2014) with its thrilling originality, its irreverent humour and spectacular action packed visuals.

Expectations were riding high with this sequel being announced before the first film was even released, but with co-writer/director James Gunn back at the helm, Volume 2 delivers on all fronts proving as entertaining, funny and poignant as the first Guardians of the Galaxy.

The film opens with how Quill’s mum (Laura Haddock) met his dad in 1980 Missouri and their ensuing romance before it flashes forward thirty-four years to the Guardians fending off a giant alien monster to a kick-ass soundtrack and Baby Groot getting into hilarious mischief and stealing the scene, hence setting the tone for the rest of the film.

According to Gunn, this is a movie about outsiders for outsiders, but it is also about fathers and sons and family.

You learn more about these characters and what makes them tick, such as why Rocket is so prickly and won’t let anyone get close and the reason for Nebula’s (Karen Gillan) long standing hatred of her sister Gamora and her daddy issues. Foes become allies and vice versa.

Pratt is on charismatic, tongue-in-cheek, cracking form while Bautista has a greater role to play in this one, as Drax is beginning to grasp sarcasm and irony which proves a hoot. Frankly he is in danger of walking away with the film if it wasn’t for the adorable and mischievous Baby Groot, who if he had been in any more scenes would have stolen the show.

It is another riveting non-stop action-packed adventure with breathtaking visuals, endless pop culture nods, fun cameos and endless killer one-liners, underpinned by a complex and gripping story, set to an awesome seventies soundtrack.

The only downside for me was seeing it in a venue with a terrible eye line and a muffled sound system which meant I missed a lot of the witty asides and some of the action, thus ruining my enjoyment of it.

Be warned there are five extra scenes during the end credits and staunch fans fear not, for Gunn has already announced he will be writing and directing the third instalment so this franchise is in safe hands.