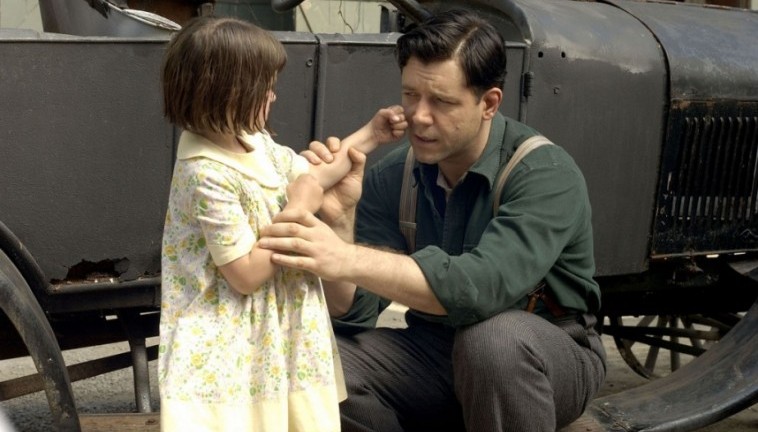 Heavyweight boxer Jim Braddock (Russell Crowe) is building himself a promising career when a hand-injury brings it all to a premature end.

Soon afterwards, the great depression hits New York and he finds it tough to get enough work to feed and clothe his wife Mae (Renée Zellweger) and three kids.

Some years later, when he’s at his lowest ebb, he receives a surprise visit from his former manager, Joe (Paul Giamatti), offering him a high-paying fight – the catch is that he’ll be little more than a punch-bag for an upcoming title prospect.

But the fight doesn’t go to plan and Jim shocks the boxing world by winning. After this, the promoter has no choice but to let him fight again – and soon, he’s challenging for the world title – against the much-feared Max Baer – feared, because his powerful punches had killed two former foes.

This is Hollywood’s telling of the true story of a boxer whose fairytale story earned him the nick-name, Cinderella Man.

The story – based on real events, but massaged to add drama (the real Braddock was about the same size as Baer, and the only reason Baer lost is because he wasn’t actually interested in boxing and didn’t even train for the fight) – isn’t as thoughtful of compelling as previous outings – together or apart – by Howard and his star, Russell Crowe, who last collaborated on A Beautiful Mind, a far more powerful and intelligent movie.

It’s an undeniably strong performance from Crowe, but his character doesn’t have much to do except be a loving father, being knocked down by the depression and several large men with padded gloves. He doesn’t develop – he doesn’t have any huge character flaws – he’s a generally nice and likeable guy, which I guess for Crowe does show his ability as an actor!

Renée Zellweger has little more to do than to whimper a bit and sadly underused in an almost pointless supporting roll is the immensely talented Paddy Considine.

But the real star of the show is Paul Giamatti, who must certainly get some form of Oscar recognition this year, after being overlooked for last year’s Sideways.

Undoubtedly, the film will be scooping up the nominations come the new year, simply because of Ron Howard’s ability to manipulate his audience – during the boxing scenes, you’ll be sitting on the edge of your seat and jumping up with excitement as each opponent unexpectedly drops to the canvas.

Or perhaps the true reason for it’s likely Oscar recognition – he argued, cynically – is that in years with no films about the Holocaust or disability, there’s nothing like a boxing film to excite the Academy: Million Dollar Baby, Raging Bull, Ali, The Hurricane, Rocky…this list goes on…