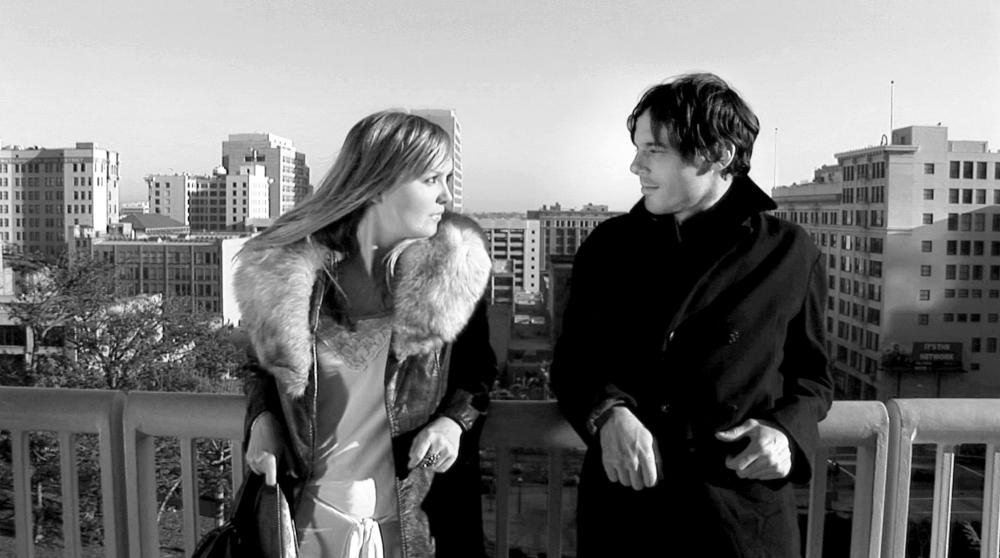 It’s New Year’s Eve and screenwriter Wilson (Scott McNairy) – recently arrived in LA – is lonely…so lonely that with the apartment to himself, he’s – ahem – pleasuring himself to an image of his flat-mate’s girlfriend’s face, photoshopped onto the body of a glamour-model.
Of course, the flat-mate Jacob (Brian McGuire) walks in – with his girlfriend Min (Kathleen Luong)! They both take it well enough, but this is all the persuasion they need to help him get a date for the evening, so that he doesn’t have to see in the New Year on his own.
Jacob gets him to place an ad on the internet and by mid-afternoon, Wilson is sifting through the replies.
He picks Vivian (Sara Simmonds) and heads out to meet her. She turns out to be a fiery blonde, who stands for no nonsense. They hit it off and spend the day getting to know each other as they wander around some of the lesser-scene movie locations in Downtown Los Angeles.
Come the big New Year’s Eve party, things don’t quite go to plan – if they did, it wouldn’t be a film – but Wilson comes away with an experience he certainly doesn’t regret – an experience that at the very least, changes his outlook on life.

This charming rom-com is precisely the kind of film any budding film-maker, with very little money, should be striving for.
It’s pretty much two main characters, two supporting characters and a handful of extras in two locations – Wilson’s apartment and the streets of Los Angeles.
The script is bristling with warm and witty one-liners and you can’t help but sympathise with Wilson the whole way through.
Present in black-and-white, the film also has a more intimate feel – it’s as if we’re voyeurs on his journey of self-discovery.
That said, what sets out to be a “search for a midnight kiss” doesn’t quite deliver on the title. You might expect a series of comic failures before he ends up with his perfect woman at midnight, but he essentially picks one woman and sticks with her all day – there’s not really much by way of a search going on.
So rather than what could’ve been a series of Swingers-like comic misadventures, writer/director Alex Holdridge has gone for more of a Before Sunrise approach, but with more attitude and less romantic scenery.
Both of the key characters are haunted by exes – and there is a little too much irrational behaviour going on to root the story in reality – unless you believe that all young women are unpredictable and illogical (but that’s a discussion for another day!).
It’s far from perfect, but it’s the closest to a truly charming date-movie that we’ve been treated to for some time.