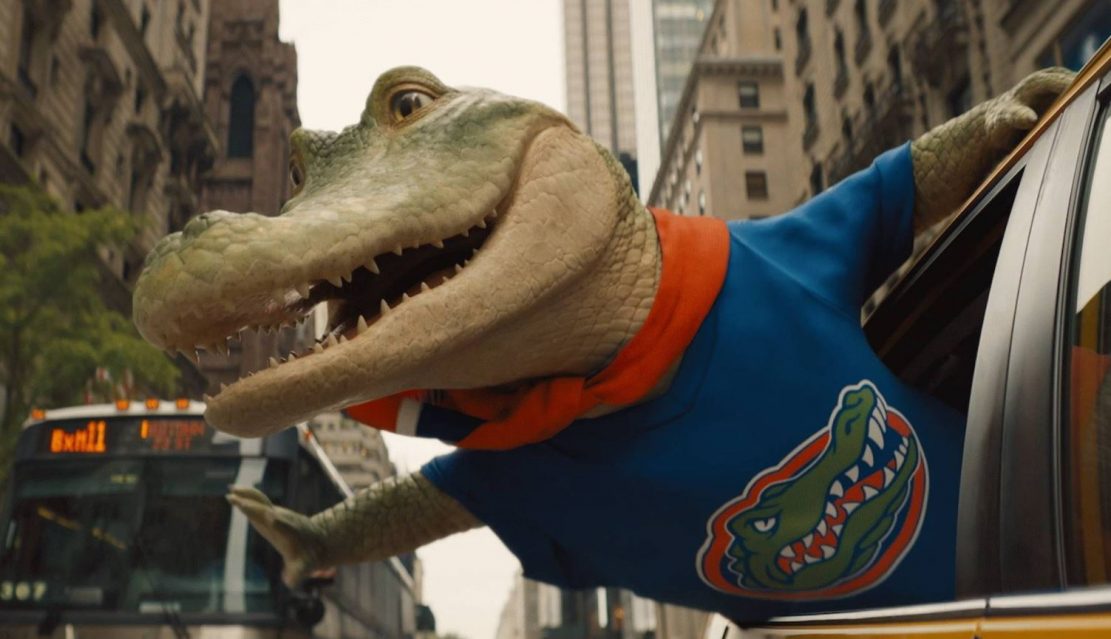 Josh (Winslow Fegley) and his family have just moved into a New York City brownstone, so that his Dad (Scoot McNairy) can take up a job at a local school.

Josh is a shy lad and finds it hard to make new friends, but when he hears bumps in the loft, he pops upstairs to investigate – and finds a crocodile. A singing crocodile. Called Lyle (voiced by Shawn Mendes). Singing, not talking, mind.

The pair hit it off, singing together on the roof, but it’s only a matter of time before his parents encounter Lyle – and worse – before the noise disturbs the grumpy neighbour downstairs.

It turns out that Lyle belongs to the former occupant of their home, an ambitious but unlucky showman with debts, Hector (Javier Bardem), who left him behind to go on tour for eighteen months, when he realised the Lyle had stage-fright.

When local officials discover there’s a crocodile living in suburbia, Josh and Hector have to persuade everyone else that Lyle should be allowed to stay at the house, rather than being sent to join his growling cousins in the zoo.

This adaptation of the 1965 children’s book of the same name is sweet enough to appeal to pre-teens. It’s been very much updated from the original book to fit with the experiences of modern children, well versed in TV talent shows, as efforts to win the public around to Lyle rest less on the heroism displayed in the book and more on his acceptance by music fans.

With a couple of catchy signature tunes, that turn up sporadically throughout the film, the Canadian pop-star Shawn Mendes gives voice to the animated reptile, while the Primm family learn to love him – and help him fight the system.

The narrative is simplistic and a little uneven, not clear whether this is a story about a failed showman who’ll do anything to succeed, a shy young boy who’s brought out of his shell by an unconventional friendship or a singing crocodile who has to overcome his stage-fright to win a talent contest – which turns out to have nothing to do with whether he can stay in the house or not anyway.

The fantasy element – the scarf-wearing, singing crocodile – feels just a little arch; if he can sing, why can’t he talk? Most of the humans in the film are rather blank canvases, making most of the supposed drama feel rather bland – most background characters just sit there not even saying anything. Only the grumpy Mr Grumps (Brett Gelman) and Javier Bardem’s exuberant Hector have any stage presence.

It’s a stretch, but there are elements of ET in here – with a young boy befriending an outsider and trying to protect him from the authorities with help from his family – and there’s even a big chase scene. But there’s none of the emotional heft – and thank goodness ET never sang.

It’s pedestrian, predictable and presses all the required plot points to engage primary school children, but there’s little to interest teenagers or adults, although you might find yourself humming a song or two as you leave the cinema.