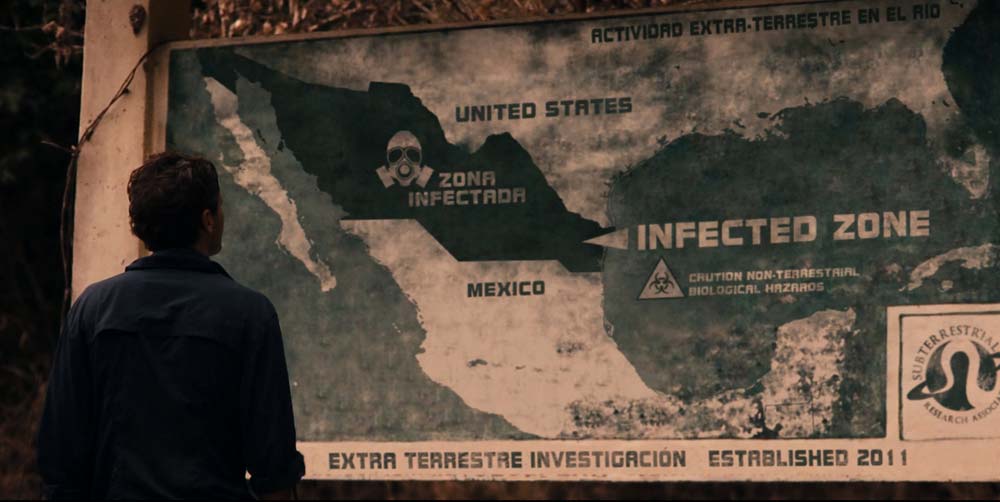 Six years ago, NASA sent up a probe to find out whether there could be life elsewhere in the solar system. It crashed upon re-entry over Central America, and soon afterwards, giant, unstoppable alien creatures started appearing all over the region. The American and Mexican military managed to contain most of them to “The Infected Zone” in northern Mexico, separated from the USA by an enormous wall.
As the film starts, warplanes are preparing to attack a central American town that’s been ravaged by monsters and newspaper photographer Kaulder (Scoot McNairy) has just two days to escort his boss’s daughter Samantha (Whitney Able) back to the relative safety of the US.
Moments after Kaulder realises he’s fond of Samantha, he spots the engagement ring on her finger.
The film charts the journey of the strangers as they trek across the Infected Zone to escape the aliens and the oncoming warplanes, developing a forbidden bond as they travel.

This is a tough one. What you think about this film will largely be influenced by how much you know about its genesis and creators.
When you hear that it was written, directed and shot by a first-time British film-maker, with a “low six figure” budget, who did all the special effects himself in his bedroom, it’s an astounding feat of guerrilla film-making.
But watching it cold, while it looked impressive and the performances and locations were remarkably naturalistic, it felt like a group of highly competent film-makers had rushed into shooting the first draft of a script – nothing quite makes sense, from character motivations, through the evolution of the aliens to the geography of the piece.
But when you hear that it was actually shot without a script, it explains – but doesn’t excuse this.
With a minimal crew and a cast of two, Gareth Edwards drove his team around Central America with a rough idea of the scenes he needed and he’d stop when he saw an interesting looking location, saying “Ooh…this restaurant would be a good place to shoot the scene where they buy a ferry ticket. Let’s see if we can find anyone who speaks enough English to play a salesman. We’ll shoot him by the menu board and I’ll turn it into a map in post.”
This method gave them freedom and flexibility but left them with 100 hours of footage, which doesn’t quite cut together. To a large extent, they had to write the film around the coverage they got and the extras they found, even writing and recording new dialogue – often expositional – to fit the edit.
At its heart Monsters has a simple plot – a road-trip, forbidden love story against the backdrop of a monster-movie – two people trying to get from A to B, stopping at C and D, with the help of E and the hindrance of F.
But it’s too far from reality to suspend disbelief, even in a world where we’ve seen films of this ilk before.
How has the whole area degenerated into a post-apocalyptic landscape in just six years? How did these alien life forms evolve into giant-land-based octopi in just six years? We’ve seen more frightening and more devastating aliens in the past and from what we see, these don’t seem as world beating as – say – Cloverfield’s dinosaur. They get within a few metres of the humans but then float away. If they can’t catch a human, how have they managed to wreak such devastation against the might of the American airforce? We never see them interacting with humans in the way we see them throwing cars around, which will be down to the limitations of Edwards’ laptop, but it does somewhat detract from the monster-movie element, when we see the humans running away from but never interacting with their unwelcome guests.
Gareth Edwards’ home computer is an amazing thing. Rarely has the production design of such an ambitious movie been so impressive, even with the biggest of budgets.
But while it’s a fantastic example of how to make something which the Camerons or Scotts of this world would spend up to nine digits bringing in for just six, this technique is not a recipe for effective narrative film-making.
If James or Ridley had brought us Monsters, critics would rightfully be critical of its many failures, but given the story behind the story, it seems churlish to do so.
What’s remarkable is that Gareth Edward’s debut low budget film is an alien-road-movie in Mexico rather than a one-location drama in an East End pub – but no director wants a review that says “really good, considering…”
If you saw this blind and was told it was a “low budget British film” you simply wouldn’t believe it. It’s an admirable debut – a gallant failure.
With a bit more thought (and maybe a proper screenplay from a better story-teller) this team – well, Gareth Edwards – will deliver a British District 9, but without a clear direction, this is more District Line.