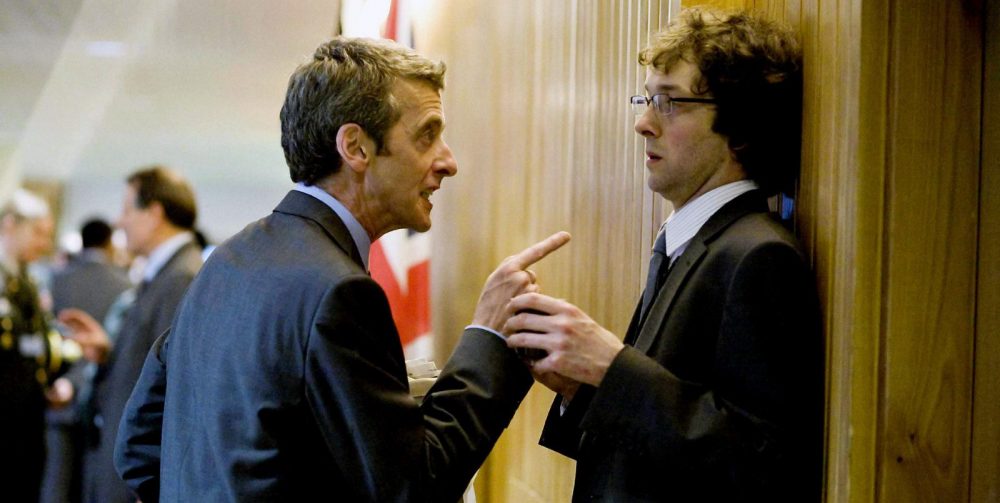 It’s another day at the office for Downing Street Communications Director Alistair Campbell – erm, no, sorry — Malcolm Tucker (Peter Capaldi), listening to recordings of radio interviews with top ministers, ahead of a potential war.

Hang on – did the International Development Secretary Simon Foster (Tom Hollander) tell Radio 4 that war was “unforeseeable?” That’s not the government’s policy, so Malcolm kicks his spin machine into action.

Trying to assert his independence, Foster hopes to set the record straight with an impromptu statement to reporters, but that ends up getting him in even more trouble.

Now both the doves AND the hawks in Washington are seizing on his comments, so to clear everything up – and keep our American allies on side – the PM sends Foster to the US.

After visits to Washington and the UN, Foster and his entourage find themselves way out of their depth, and even the mighty Malcolm Tucker struggles to keep his head above water on the international stage.

This is – in a sense – a feature length version of Armando Iannucci’s razor sharp BBC4 political satire The Thick of It. Most of the cast join him on his journey from small-to-big screen – although some of them inhabit different roles here.

But the favourites – including Peter Capaldi’s irascible spin doctor Malcolm, his rabid pitbull of an assistant Jamie (Paul Higgins) and the hapless ministerial adviser Oliver (Chris Addison) – are back, in all their expletive-deleted glory, alongside a new minister (Tom Hollander), an irritating constituent (Steve Coogan), a pacifist (but pragmatist) American General Miller (James Gandolfini) and a kindergarten of State Department aides, among others.

It’s a film about BIG politics – as dossiers are massaged to fit the wishes of the leaders – and LITTLE politics as the politicians and their spin doctors argue among themselves and swear at each other until the air is blue. Don’t take your granny, as “f” and “c” words are flung around like ballot papers at an election. But if you can handle it – and you can keep up – the relentless pounding of swear-words punctuates the razor-sharp dialogue like mellifluous grammatical poetry and part of the fun is in guessing what on earth they might say next.

The performances are every bit as on-the-button as the satire, as Iannucci speculates about the run-up to the Iraq-war – although he just refers to it as being “in the Middle East.”

The comedy – and the passage of time – serve to distance the film from the truth in this sense. Iannucci isn’t trying to tell us what happened – it’s more like he’s trying to tell us what he’d like to think probably happened. In that sense, it’s a bit like the Oscar-winning The Queen – you want to believe that’s what happened – and looking back on history, you can imagine that it really might have been like this.

But with so many of his guesses seeming to be prophetic – with Jacqui Smith’s husband’s viewing habits proving that fact is odder than fiction – it gets so close to the bone that at times, it feels more like documentary than satire – an uncomfortably hilarious Louis Theroux kind of documentary.

And while journalists love it, politicians and spin doctors have condemned its incredulity and lack of originality. I wonder how interested everyone else really is in the minutiae of what might have happened all those years ago.

For most viewers, it will probably work more on the level of a Fawlty Towers kind of sitcom than as political invective.

There will be few films this year with us much wicked humour and as many belly laughs, but at times, it feels a little parochial, following these powerless lowlings – maybe a few “West Wing” glimpses of the big players would have made it feel a bit more deserving of its big screen status – sending the cast to America doesn’t make it any more theatrical than the Office’s feature length Christmas special. And on the rare occasions that the film strays from the meat at its heart – to Northampton, for example – it feels more like a tacky Brit-com than the world-changing, incisive commentary it almost certainly aspires to be.

And perhaps because of his own frustration at Tony Blair’s support for George Bush, Iannucci fails to explain why his Britain is launching itself whole-heartedly into this war, when even the omniscient Malcolm Tucker knows the evidence all stacks up against it.

So, dramatically, the plot doesn’t really convince, supporting Alistair Campbell’s assertion that the politics simply wouldn’t unfold like this. But his insistence that the political wrangling was miles from the mark feels somewhat hollow. Once a spin doctor, always a spin doctor?