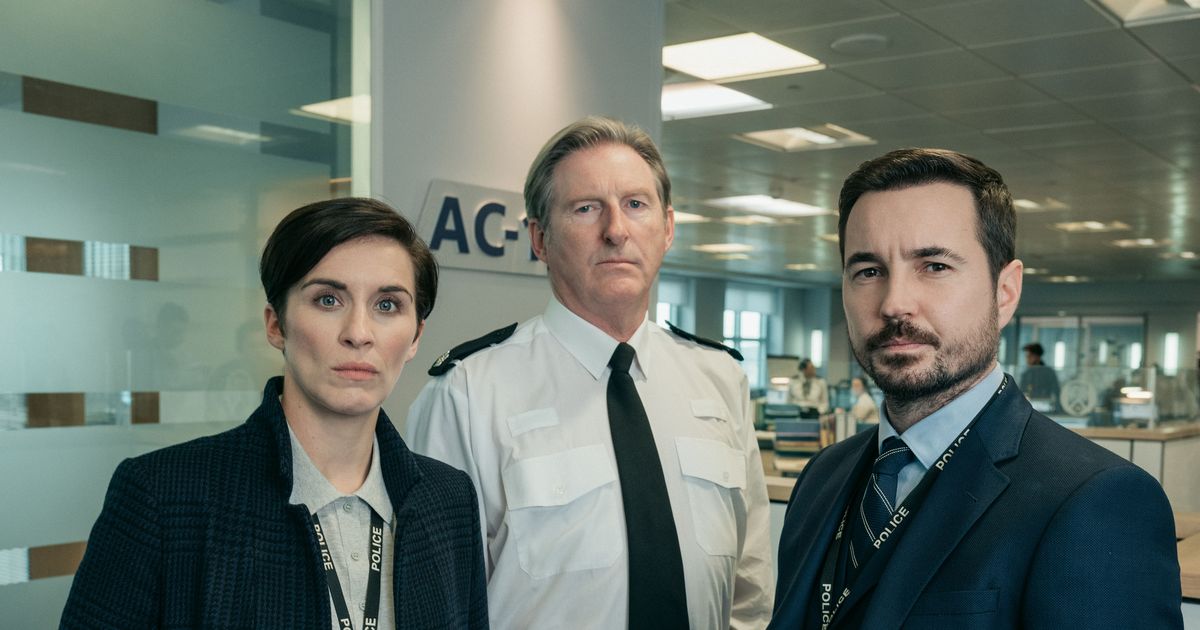 Central Police – in an unnamed British city – is teeming with bent coppers.

Under the guidance of Superintendent Ted Hastings (Adrian Dunbar), the anti-corruption unit AC-12 is trying to root them out and bring them to justice.

Season 1 – DCI Tony Gates (Lennie James) raises the interest of AC-12 by fiddling his arrest figures, but soon finds himself in over his head when he helps his girlfriend (Gina McKee), who’s in league with local crime boss Tommy Hunter (Brian McCardie).

Season 2 – Inspector Lindsay Denton (Keeley Hawes) is the only police officer to survive an ambush that leaves a protected witness dead. Did she help to set up the raid or was she set up by the Deputy Chief Constable Mike Dryden (Mark Bonnar)?

Season 3 – When firearms officer Sergeant Danny Waldron (Daniel Mays) shoots dead a suspect, AC-12 discover that the case is linked to historic child abuse at a care home, that was covered up by a senior police officer.

Season 4 – When DCI Roz Huntley (Thandie Newton) tries to pin a murder on the local sex offender, a forensics officer (Jason Watkins) tries to report her to AC-12, but she won’t let him end her glittering career.

Season 5 – AC-12 are called in when a police officer, deep undercover inside a criminal gang, breaks off contact with those leading the operation, with no-one knowing whether the officer has gone wrong or is cutting off ties to try to bring the gang down.

Season 6 – DCI Jo Davidson (Kelly MacDonald) is desperate to find the killer of a high-profile journalist to get her superintendent (Nigel Boyle) off her back, but when AC-12 realise she’s got the wrong man, they question her motives.

Running through all six seasons, an organised criminal gang appears to have its fingers in every pie – at every level of the police and among prison officers too, ensuring that rats won’t have an easy time behind bars – as Hastings, Arnott and McClure try to break up a network of corrupt officers, with those more senior than them stopping at nothing to protect their illicit ways.

As Jed Mercurio’s Line of Duty has progressed through the seasons, it’s increasingly become the kind of water-cooler TV show that’s long been absent from our screens, to the extent that the final two episodes of Season 6 each broke the record for the UK’s biggest audience for a non-soap drama, since the current system began in 2002. With 13 million people tuning in as the king-pin was due to be revealed, Line of Duty came as close as possible – in these pandemic days – to the communal viewing experience that will be returning when cinemas reopen this month.

With each season involving a self-contained story against the backdrop of a wider criminal conspiracy, audiences get a chance both to engage with the new characters in each series – and to see how they fit into Mercurio’s wider story.

There are moments when this structure adds to the narrative, but at other times, trying to tie together a child abuse racket with a drugs gang, for example, doesn’t sit too comfortably, almost negating the power of the twists and turns. This makes for an uneven – but no less gripping – experience.

And so it is that Line of Duty is a mixture of compelling police drama that will have you on the edge of your seat, binge-watching half a series in one night – while throwing in elements that seem so preposterous that you’ll be rolling your eyes with disbelief.

Rather too often, it’s clear who the bad guys are to the audience – from their villainous scowls and devious looks – but the fun is finding out how AC-12 unmask the “bent coppers” and navigate the politics at the top of the police force that try to protect them.

The six seasons are bursting with dozens of Britain’s finest actors, with the likes of Lennie James, Keeley Hawes, Daniel Mays, Thandie Newton, Stephen Graham and Kelly Macdonald all turning in ambiguously complex performances. It’s peppered with action sequences – car chases, gunpoint stand-offs, ambushes – that wouldn’t be out of place in a Hollywood blockbuster. It’s full of covert meetings with undercover sources in underpasses. And it’s riddled with interviews (under caution, of course) that last for as long as half an hour, as this document or that is produced in evidence, and – in many cases – the suspect turning the tables on the investigators; part of the beauty of the concept is that unlike standard police dramas, everyone in the room knows all the tricks of the trade. All of which leads to a range of drinking games, taking advantage of familiar set-ups or catchphrases.

If you enjoyed the first five seasons, you’ve probably already watched the sixth. If you’ve never dipped your toe into AC-12 and have managed to avoid all the spoilers, you’ll need to start at Season 1, as jumping in midway through will leave you with too many questions to catch up on, as a surprising number of people from earlier seasons re-emerge later. There are also times where the narrative tries to expand on the back-stories of the main characters – sometimes they’re useful, sometimes pointless and sometimes, they raise more questions than they answer.

On the one hand, this helps you to immerse yourself in the Mercurio’s world – but it can also get to feel a little parochial. In most police dramas, there’s a plentiful supply of criminals to keep them busy – but with almost everyone being linked to a single mysterious gang, headed by a shadowy figure that even those involved in the conspiracy can’t identify – you might share the senior officer’s questions about why it’s taken the best part of a decade to put all the parts of the puzzle together.

It’s been strongly suggested that Season 6 brings the saga to an end, but after 36 hours of compelling drama, many viewers have found the long-awaited denouement somewhat of an anti-climax, with rather too much feeling unconvincing, disappointing or incomplete, all of which raises the question of whether a Season 7 is required to tie up a loose end or two.

There’s certainly more to come out – whether or not Jed Mercurio has decided what it is yet. And with record audiences, who could argue against more of the most gripping nonsense on TV?