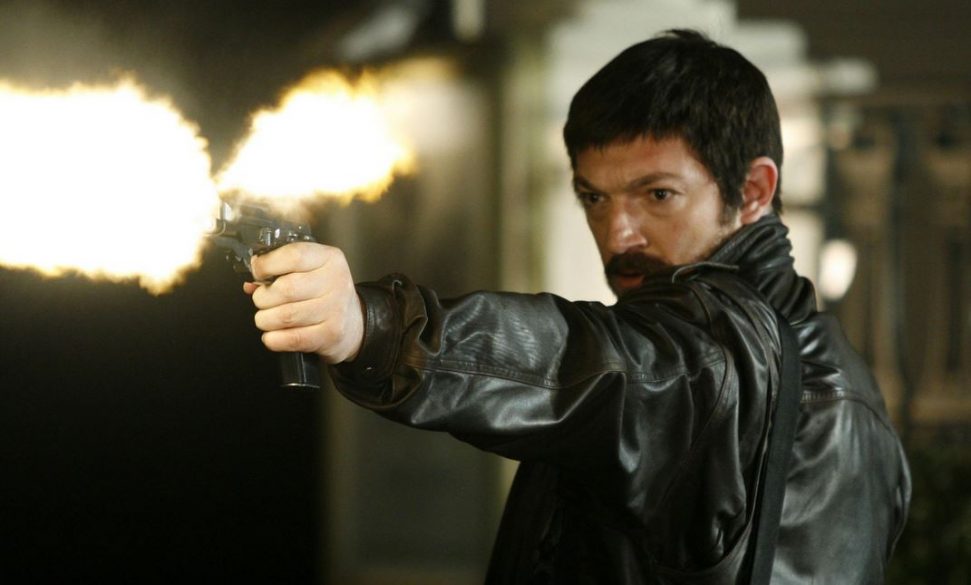 Some of you might have seen Part One of this epic biopic in the past few weeks, but in case you haven’t, the opening scene reminds you of everything you’ll need to know. Jacques Mesrine (Vincent Cassel) is a French gangster who gets shot dead in a Paris street in the late 1970s. Then we flip back in time to witness his rise and fall.

When we first meet him this time around, he’s being questioned about a crime. He’s happy to accept guilt, as long as they pronounce his surname right – the S is silent.

He’s clearly not fussed about being in custody, as he has plans to get straight back out again.

Over the years, Mesrine develops a reputation as much for his escaping as he does for his robberies. During one spell inside, he teams up with fellow inmate François Besse (Mathieu Amalric), who becomes his partner in crime for the next few years.

More than money, Mesrine’s main goal in life is notoriety. Playing to the crowd is his thing, so his antics keep getting bigger and wilder, as he winds up the police – Broussard (Olivier Gourmet), in particular. And you don’t want Broussard on your tail.

As he starts to get a bigger sense of his own self-worth, he slowly sheds his gentlemen bank robber image and becomes more of a radical rogue, who’s unashamed to show the public the same ruthlessness he shows his victims.

Gangster, escapologist, all-round bad-egg, Mesrine is well and truly the kind of Public Enemy Number One the big screen hasn’t seen since – oh John Dillinger, in Michael Mann’s Public Enemies just two months ago. You don’t get any for years and then two come along at once!

Coming just three weeks after Part One of Jacques Mesrine’s life-story hit the big screen, you might think four hours is a long time to devote to a biopic about someone who you probably hadn’t heard of.

In truth, you have to be a real fan of French crime cinema to watch them both in such close succession.

If you’re going to pick one, pick Killer Instinct – in which events turn Mesrine from a disheartened soldier to a world-famous gangster – rather than Public Enemy Number One, which is a more traditional cat-and-mouse film about a criminal who taunts the authorities, allows himself to be caught and then just runs away again.

Since both films begin with bloody justice being meted out on a Paris street, seeing Part One in isolation doesn’t leave you needing to watch Part Two to know how it all ends. Killer Instinct stands alone as a great biopic and crime thriller. Public Enemy Number One does not.

As a film in its own right, the performances – as before – are impeccable – the action taut – and the direction energetic. But rather than Mesrine being a complex crook with a degree of empathy, as he is in Part One, here, he’s a far more simplistic, single-tracked figure – hell-bent on notoriety for notoriety’s sake. He has none of the ironic cheeky charm that he had in Killer Instinct.

It’s fun to watch his ever-growing repertoire of disguises, as the law starts to close in, but while his appearance changes throughout the film, his actions and motivations to not.

There’s very little character development – for him or any of the supporting characters, who – here – are fewer in number and less sympathetic than those in the first film.

And, of course, having seen how it’s going to end in the opening scene of both films, the wind is kind of taken out of the film’s sails as the denouement approaches.

After Part One, I said I couldn’t wait for Part Two. Armed with hindsight, I’d advice you to wait. See Killer Instinct on the big screen and then wait for the DVD of the sequel – and watch them both with some brie, baguette and a bottle of Bordeaux.

Seeing both in the cinema will be a case of a little too much, too soon.