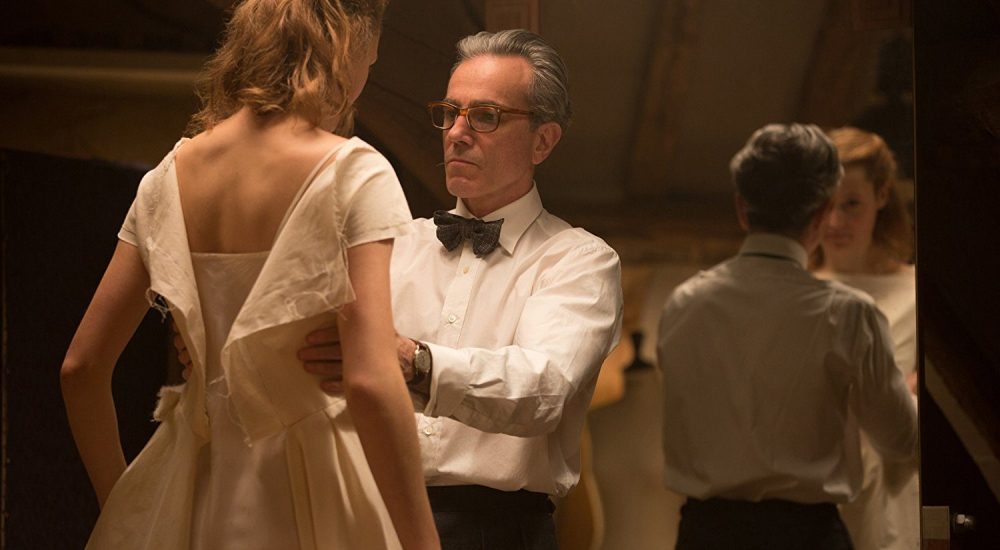 In 1950s London, Reynolds Woodcock (Daniel Day-Lewis) is the go-to dress designer for celebrities and the nobility. His no-nonsense sister Cyril (Lesley Manville) is the brains behind the business, managing his staff and clients and diplomatically disposing of his lovers when he grows tired of them.

But when he meets a German waitress Alma (Vicky Krieps) at a hotel, during a trip to the country, everything changes. At first, a familiar pattern is followed; she returns with him to London as his muse and his lover, models dresses and inspires him to further success.

But this time, when he begins to tire of the relationship, it’s not so easy to get rid of her.

The relationship soon takes on a new dimension that Cyril can’t influence and Reynolds can’t control – which is all the siblings need when the business is coming under increasing pressure.

In the late 1990s, a pre-knighthood Sir Daniel Day-Lewis gave up acting and moved to Italy where he became a cobbler – until Martin Scorsese asked him to star in Gangs of New York.

Once again, he’s announced his retirement, saying that Phantom Thread will be his final film before leaving the profession. Do we believe him this time? Do we care? Will it change the way we view his performance? Will he be satisfied with this as his final film?

Honoured with his sixth Oscar nomination, three of which he’s converted to Academy Awards (so far), he can at least step back into the shadows with a sense of pride, but this is not a Lincoln or a There Will Be Blood; there’s no scenery-ripping, barn-storming, earth-shaking moments that will resonate after you’ve left the cinema.

It’s a quiet, controlled performance, as a quiet, controlling maestro, who’s not used to having someone answer him back. Reynolds Woodcock is not a pleasant man, but we’re asked to believe that his talent is such that everyone from clients to staff will accept whatever he throws at them, just to bask in his glory.

But not Alma. And she is really the heart of this film, not him.

With Paul Thomas Anderson’s deliberately slow storytelling, it takes a while for the audience to realise that this isn’t really a film about a man whose apparent misogyny comes more from his passion for his work – his a misanthrope who’d be rude to anyone who cramped his creativity, man or woman – but about a woman who decides she won’t stand there and let anyone take advantage of her.

What starts as a romantic drama turns unexpectedly – and not entirely convincingly – into a psychological thriller.

The film has been described – by some critics and commentators – as misogynistic, but without wanting to give too much away, if these commentators had made it to the final act, they’d have noticed that it plays more like a feminist fable. Vicky Krieps herself has said, in interviews, that she regards it as being the “opposite” of misogynistic and she sees her character as a real feminist.

In a sense, Day-Lewis should have been nominated in the supporting category, because it’s ultimately a film about Alma.

As the film progresses, the powerplay between the couple shifts, but with it, the sympathy of the audience understandably slides from one victim to the other.

The subtlety of the shift is deftly handled by both the director and stars, under the watchful eye of Lesley Manville’s rightly honoured Cyril. There’s also a sense in which her dominance over her brother adds to the strength of argument that this film favours the women. But if you forget the fact that she most definitely wears the trousers in their sibling relationship, to the outside world, it does look like a bullying boss, pushing his female workers to the limit.

I can almost hear a chorus of “you’re a man – you don’t understand” – but steering clear of spoilers makes it hard truly to argue the case. That said, this is no more misogynistic as a film than Suffragette, another film in which women are downtrodden and abused – at first.

This film would have fallen on its backside if the costumes hadn’t been astounding and the Oscar nomination for Mark Bridges – yes, a man – testifies to its success on that front.

But while the film is technically as well crafted as one of Reynolds’ gowns, the performances are so measured and calculated that the characters hardly feel human and their conflicting and shifting emotions and surprising lack of passion – there’s more for the dresses than for the people – make it hard to find an emotional core to the film.

Perhaps the biggest criticism is that it simply takes too long, with too few clues, to get to the final act, where the true narrative emerges, which makes the unexpectedly disturbing denouement seem more of a surprise but less believable.