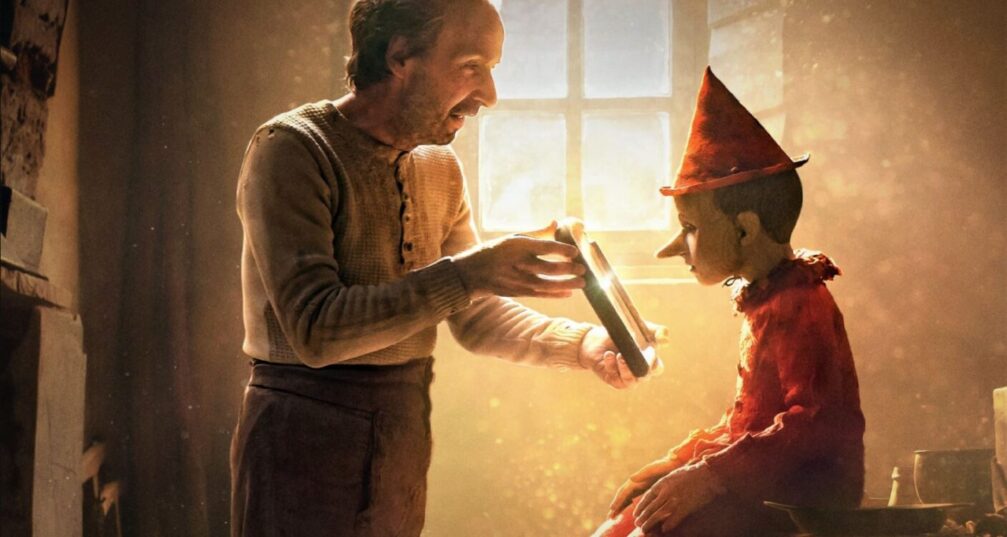 When destitute wood-carver Geppetto (Roberto Benigni) sees a roving puppet-show, he decides he might be able to make a bit of money doing something similar. He buys an enchanted log and carves it into a young boy.

When Pinocchio (Federico Ielapi), as he calls him, magically comes to life, Geppetto finally has the child he’s always wanted.

Pinocchio’s desire to explore the world and feel the joys of being alive, combined with his newborn naivety, lead him ever further from home and deeper into trouble.

After a benefactor gives him some money to help him on his way, a pair of antagonists prey on his innocence, tricking him into giving it up, leaving him with no way of getting home.

As Geppetto sets out to bring his son home, together and alone, the pair of them have the most unexpected adventures.

This time, Roberto Benigni – known outside Italy mostly for Life Is Beautiful – is taking his second pop at the story, on this occasion, playing Geppetto in this live-action version from Matteo Garrone – best known himself for Gomorrah and the twisted fantasy portmonteau, Tale of Tales.

That gives the best flavour of what is to come – rather than the cheeky, friendly faces many will remember from Disney’s classic, this imagining of Collodi’s world is populated by a dark and creepy collection of grotesque characters – anthropomorphic animals, from foxes and crows to snails and gorillas and, of course, his cricket sidekick.

As any new arrival to the world of the living would find, it can be hard to tell the unscrupulous villains from those who want to help, especially when some people initially want to take advantage of you but then warm to your charms.

But Pinocchio isn’t as charming as he needs to be – perhaps because of the tonne of make-up he’s under, perhaps because of the language barrier – but rather than being a cheeky chappy that we want to root for, he’s more like the naughty boy next door whose shouting over the garden fence makes you roll your eyes.

The story itself is disappointingly linear and out of the hands of its protagonist – it’s not really a film about what Pinocchio does and how he tries to find his way home – it’s more about how the people he meets along his journey choose either to help or hinder him as they nudge him on his way.

This makes it easier to sympathise than empathise with the central character, which limits the film’s capacity for drama and tension. This might be how stories were told in the 1880s, but story-telling has moved on since then.

It’s visually impressive, the landscapes, production design, costumes and make-up wouldn’t be out of place in a Terry Gilliam film and its easy to get sucked into Garrone’s spectacular vision. But the magic ends there; his characters aren’t generally emotionally engaging and the situations don’t feel consistent.

While there’s a lot of darkness, there’s not much evil and the good often feels convenient, making the linear narrative feel more like you’re lining up dominoes than putting together a puzzle.

It’s available in two versions – subtitled and dubbed, but at least the dubbing of Pinocchio and Geppetto are by the same actors, giving this version a little more authenticity than you might otherwise expect.

But it’s difficult to know who it’s aimed at; a PG film that’s too dark for young children but too childish for older ones.