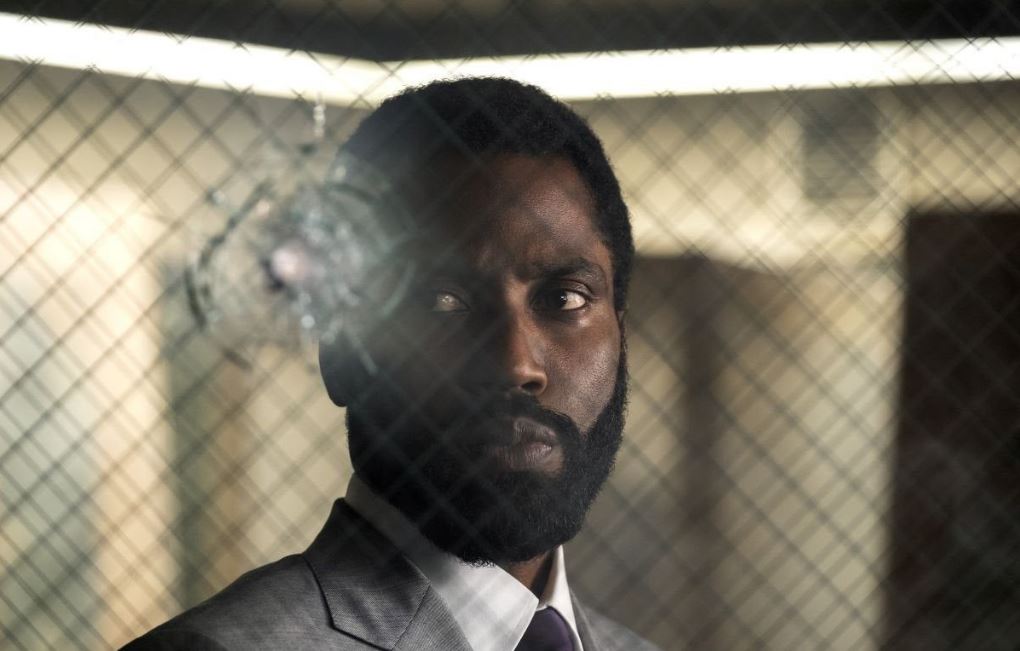 The existence of the world is under threat – not from a nuclear holocaust, but something far worse.

In the future, scientists will work out how to invert entropy – apparently, that means that things can go backwards, so that instead of firing bullets from a gun into a wall, for example, the wall can spit the bullet out and the gun will catch it.

These future scientists appear to have further developed their technique so that even people and their actions can be inverted – and to make things more worrying, they’ve managed to get the technology back in time, to the present day.

A Russian arms dealer, Andrei Sator (Kenneth Branagh), is plotting to harness this power to bring the world to an explosive end and one man, an unnamed American spy (John David Washington), is all that stands between the end of history and the future of the planet.

With the fate of Earth on his shoulders, our protagonist has only a handful of people he can call on for help – using a secret hand-signal and the code-word “Tenet”.

As many have observed, just as Christopher Nolan’s “protagonist” has the fate of the world on his shoulders, the director himself is seen – by many – as having the fate of the cinema industry on his.

Since the Covid crisis closed cinemas across the world, five months ago, Tenet was seen as the beacon in the fog – the light at the end of the tunnel. Some cinema chains even planned their re-opening, after the lockdown, on the release of this film – which ended up being delayed and delayed until Warner Brothers took the unexpected decision to let audiences outside the US see it before those at home.

With many people reticent about going out at all – particularly to sit down, inside with strangers, for an extended period of time – and with so few new films being released on the big screen, cinemas have expressed growing concern about their viability.

But if any film needs to be seen on the IMAX, rather than the iPad, it’s the latest time-bending, mind-bending epic from the man behind what are regarded as high-brow crowd-pleasers such as Inception, Interstellar and the time-reversing drama Memento.

If this doesn’t get people back into cinemas, nothing will, or so the narrative goes. And no review will really make a difference. If people like to be confused and wowed in equal measure by Nolan’s idiosyncratic vision, there’ll be enough here to engage them and if they find him to be pretentious, Tenet will reinforce those prejudices too.

At two and a half hours, it’s long, but never drags. There’s always something going on – it’s bursting with so many ideas that you don’t always have time to digest what you’ve just seen before it moves on to the next one – you almost need time to go backwards to catch up.

But while, on the surface, the plot could be taken from any James Bond film – a spy on a globe-trotting mission to stop a ruthless villain who’s armed with futuristic technology – what makes Tenet stand out is the time-shifting element of the story-telling.

“Inverted” things and people can move back and forth in time – but do so within the existing time and space continuum, so while in other time-travelling films, we see people disappear from one time zone and reappear in another, here, we actually see some things moving backwards, while other things around them are moving forwards. It’s a stunning and original visual gimmick, which gives rise to some spectacularly innovative car chases and fight scenes, which become all the more impressive, the more the pieces start to slot together.

Nolan likes to strain the brain and he throws up such theories as the “grandfather paradox” – if you go back in time and kill your grandfather before your father was born, how could you exist in the future in the first place – but this, along with many other elements of the story, are presented by way of somewhat clunky expositional dialogue – there’s a lot to explain, but as a writer, Nolan is usually more elegant than this.

He borrows from many films we’ve seen before – whether it’s the reverse narrative of his own Memento – there are even elements of The Terminator in there, but at least he brings something fresh to the more familiar elements.

Some of the casting – or more precisely the accents – feels a little off. Kenneth Branagh chewing the scenery with his Russian growl, Clémence Poésy needlessly playing English, Himesh Patel being American – but this is not a film about people and characters, but their place and role in the fabric of existence.

Given its underlying structure, you almost wonder whether Nolan himself had been to the future before he wrote this, because it contains such prescient elements as characters wearing facemasks and the maguffin that’s poised to cause all the trouble is described as the algorithm.

He’s delivered a piece of Nolan-by-numbers – Tenet will delight his own fans and anyone in need of an all-encompassing big screen experience, but it’s unlikely to win over many new followers.

For the target audience, it demands multiple watches – to make sure you’ve caught everything – or to confirm in your own mind whether it’s coherent or taking liberties with our trust – but that could be the cherry on the cake for cinemas.

This will unquestionably be a point in time to which industry analysts will want to return to establish whether film has a big-budget future on the big screen or a more intimate future at home – can the blockbuster move forward or will it become a thing of the past – and will Tenet be part of the answer?

It poses enough questions, why not one more?