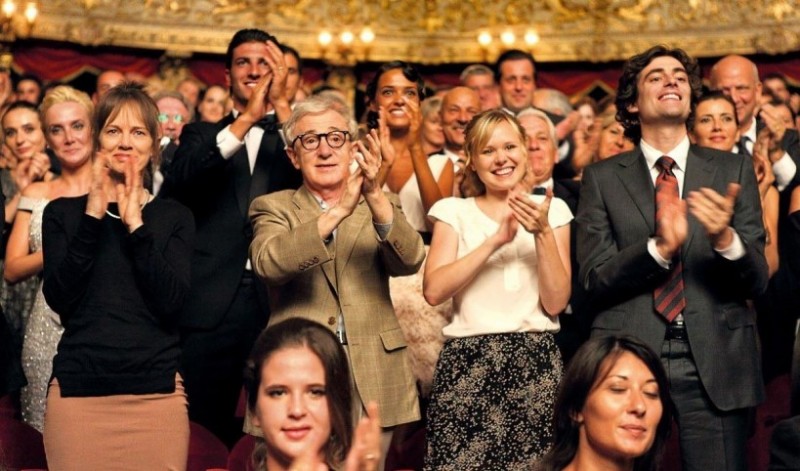 American student Hayley (Alison Pill), on holiday in Rome, meets local pro-bono lawyer Michelangelo (Flavio Parenti). They fall in love and decide to get married, so her Mum and Dad, Phyllis (Judy Davis) and retired opera director Jerry (Woody Allen), fly over to “meet the parents.” Overhearing Michelangelo’s undertaker father singing in the shower, Jerry tries to encourage him to switch professions and have a go at fronting an opera.

Country boy Antonio (Alessandro Tiberi) and his beautiful but naive young wife Milly (Alessandra Mastronardi) move to Rome, for him to take on a job with his uncle’s firm. To make sure she’s looking her best to meet her husband’s new boss, Milly pops out for a haircut, but gets lost. While Antonio is waiting for her to get back, high-class hooker Anna (Penélope Cruz) stumbles into his room by mistake and his uncle walks in to find the pair in a clinch, so the only way he can keep up appearances is by pretending that she’s his wife. Milly, meanwhile, has her own romantic adventure when she stumbles across a film shoot.

Student architect Jack (Jesse Eisenberg) is living in Rome with his girlfriend Sally (Greta Gerwig), whose flighty and flirty actress friend Monica (Ellen Page) flies into town for a visit, to get over a failed relationship. Jack bumps into a veteran American architect, John (Alec Baldwin) who’s revisiting the old haunts of his youth. When Jack suddenly finds himself struggling to resist Ellen’s undoubted charms, the older man starts giving him the benefit of years of romancing women.

Lowly Rome office worker Leopoldo (Roberto Benigni) suddenly becomes the flavour of the month and finds himself shadowed by the media every second of the day. They want to know everything from what he has for breakfast to what he wears under his trousers. He can’t understand why everyone is so interested in him and quickly grows tired of all the attention. But when the press and broadcasters suddenly and inexplicably latch onto another poor sucker, Leopoldo realises he misses them.

Over nearly two hours, these four stories – two in Italian and two in English – are intercut, allowing us to follow them all concurrently. But if you’re wondering how they link up, don’t bother trying to work it out; they don’t.

For no reason other than that they all happen in Rome – and any of them could, in fact, have happened anywhere – these four stories are combined into one feature-length package, because people don’t generally go to the cinema to see short films.

But that’s what the audience is getting here; four short films. Written and directed by Woody Allen, they all have a certain charm and none is without a flash of the wit and intelligence of his earlier work and some even possess the surreal elements that have infused his oeuvre.

While the films do feel like the work of Woody Allen, they all seem very tired. Roberto Benigni’s segment would be a neat satire on celebrity if it weren’t for the fact that Allen has made an entire film about the subject – he even called it Celebrity. This theme is also evident to greater or lesser extents in the other three vignettes, while other themes – familiar to Allen and more widely among comic cinema – including infidelity, mistaken identity, the class war and nostalgia – also make an appearance.

Eisenberg makes a good stab at being the “young Woody Allen” – a role that’s featured throughout the director’s work, since he’s been too old to be the romantic lead, although the film appears to suggest that he’s also playing the “young Alec Baldwin” in a role that could be seen as both a real-life character and an imagined adviser, like Play It Again Sam’s Bogart, although neither works when considered fully within the narrative.

But it’s certainly nice to see Allen himself back on screen in a role suited to him and his own qualities; whether he’s given himself the best lines or he just has the best delivery is open to debate, but he is certainly one of the most watchable of this sprawling ensemble cast.

The flashes of the best of Woody Allen remind you how talented he used to be but seeing his ideas delivered in short, sharp bursts leaves you nostalgic for the days when he was able to string enough thoughts together coherently to produce a feature film, rather than being able to squeeze no more than half an hour out of each story.

It must be hard for anyone – especially a director so prolific that he’s made 42 films in 46 years – to come up with a full new film each year, but with To Rome With Love, he’s perhaps thrown away a couple of features-worth of material in one go, while padding it out with the kind of things we’ve seen many times before – both from him and others – making it all feel a little lazy and somewhat inconsequential.

It’s certainly entertaining enough to be worthy of a theatrical release, which puts it a rung above many of his most recent works, but his visit to Italy is far less satisfying than his other recent European adventures – Midnight in Paris and Vicky Cristina Barcelona. It’s like a city break that’s enjoyable while you’re there, but quickly forgettable.