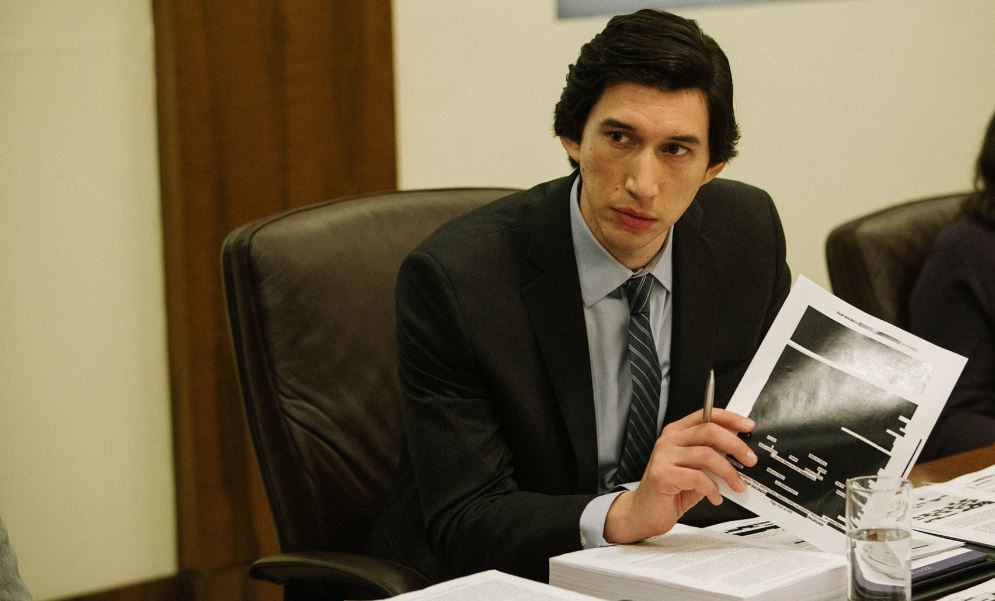 After the 9/11 attacks, which killed nearly 3000 people and wounded at least another 20,000, President Bush took the lead in what became known as the War On Terror.

While American troops formed the largest group within the international coalition fighting against Al Qaeda on the ground, behind the scenes, the CIA was rounding up the suspected ring-leaders.

Leading figures in Washington were persuaded by a pair of psychologists that what they called “Enhanced Interrogation Techniques”  – what President Obama later branded torture – would increase the likelihood that the prisoners would give up intelligence relating to future attacks.

But years later, the effectiveness of the techniques – including sleep deprivation and water-boarding – came into question, and with it, the legality of the whole process.

The US Senate Intelligence Committee, under Senator Dianne Feinstein (Annette Bening), commissioned an investigation into the actions of the CIA, led by Senate staffer Dan Jones (Adam Driver).

More than five years – and nearly 7000 pages later – the study, nicknamed The Torture Report, was ready.

But everyone from the CIA to the Obama White House had their own reasons to stop the report ever seeing the light of day, so Dan took it upon himself to make sure his hard work hadn’t gone to waste – and the world would find out just what was going on in the name of justice.

For a film about a dwindling group of people sitting at computers, in a basement, reading documents, The Report is astonishingly riveting.

Of course it’s not the document reading that makes the most riveting watching, but the political interplay that comes from the efforts to suppress Dan Jones’s conclusions – that the enhanced interrogation didn’t work, that the CIA knew that but continued using them anyway, even though their legality depended on them working.

Imagine coming to such a conclusion and then expecting, in all good faith, that the world’s most powerful government and intelligence operation would sit back and let you publish without a fight.

As is often the case with such films, our protagonist is an idealist – and one whose outlook will be shared by most of the target audience.

His sheer determination to uncover the truth and then share it with the world is admirable. Some of the key characters around him (notably Annette Bening and Jon Hamm) are delightfully conflicted – supportive to the point of frustratingly close. Others, with the CIA (including Michael C Hall) are constantly trying to put up road blocks – but with a public smile on their face.

Add a friendly whistle-blower and a sympathetic journalist into the mix and you have all the ingredients for a multi-way drama with help and hindrances in all directions.

To those unfamiliar with the workings of a Congressional inquiry, it’s perhaps confusing to understand why the CIA would provide documents that clearly implicate them in breaching the law – while then trying to argue that they were completely justified. It’s also not quite clear why they’d provide some crucial documents but not others – and why the investigators would then believe and accept that they have all the documents they’d expect to have, without wondering what else might be out there that they’re not allowed to see.

The political machinations are intriguing but the procedure aside, the film is cleverly constructed with unusually effective flashbacks, which take you out of one basement into another – a far darker environment, while the politics playing out against the fight for justice take the narrative in more interesting directions.

Perhaps, in the circumstances, with the CIA trying to cover up torture, you might have expected Dan to come up against even more forthright opposition – the kind of opposition that might approach you in a dark alleyway rather than a bright office – which does make this an oddly polite and grown-up battle of wills.

The Report is this generation’s All The President’s Men, but told from the Deep Throat’s point of view, exposing not just the scandal at its heart but the treacle-like nature of a system which promises transparency but does it’s best to guarantee opaqueness.

Without spilling over into any kind of private life, Adam Driver is constantly engaging in his document reading, analysis and argument – and always convincing in his pragmatism – as he sets out to expose America’s biggest political scandal since Watergate.

The Report is perhaps a little simplistic in its conclusions but as such, it’s very clear where it points the finger and it might not be where many viewers might expect.

It’s one of those films where the captions that pop up as the end credits are about to role denote exactly the kind of moral ambiguity you might expect when someone is trying to take on such powerful forces as the CIA and the White House.

There’s a particular sense of urgency to The Report, being released during a row about the publication of a report about alleged Russian interference in UK politics in the run-up to a general election.