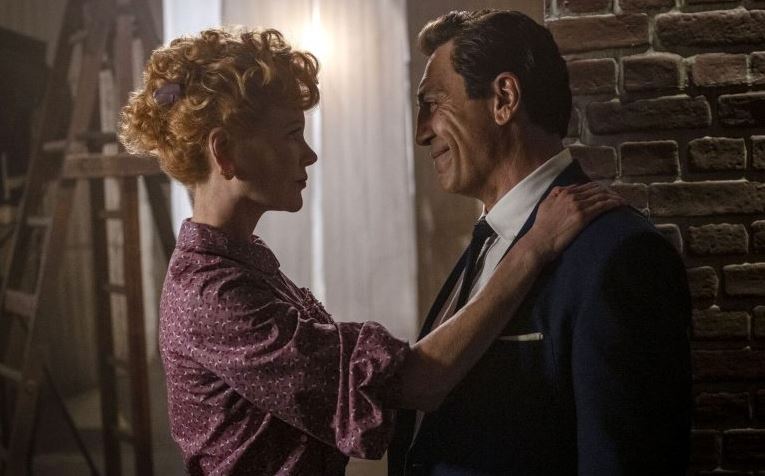 It’s the 1950s and TV duo Lucille Ball (Nicole Kidman) and her husband Desi Arnaz (Javier Bardem) are at the height of their fame; sixty million Americans tune in to watch I Love Lucy every week.

The viewers, TV network bosses, sponsors – and the stars themselves – are shaken when a TV commentator blurts out that Lucille is a member of the Communist Party, at the height of the McCarthy-era hearings.

If this allegation doesn’t end the show, reports in the papers of Desi’s infidelity might.

Can their careers – and their relationship – survive the onslaught of bad press?

There’s plenty of talking but not as much walking as you’d expect from Aaron Sorkin, as he turns his attention to the golden couple of American TV.

He takes some of the biggest struggles of their career – from the Communist Party membership claims and the allegations of infidelity to how their show could deal with Lucille’s pregnancy – and funnels them all into one eventful week.

This adds to the pace and drama but removes much of the authenticity from the narrative, that’s neatly structured with older versions of some of the key supporting characters adding their recollections from the present day.

But the performances – from the stars themselves to their hapless writers, producers and executives – are always believable and the film provides a convincing glance at a key period of American television history, long before any notions of equality were entertained – a confident and powerful woman was a shock to the system.

While there’s a lot to enjoy, the narrative at its heart is more confused than it should be and doesn’t benefit from a satisfactory emotional arc and while American audiences may well lap up this piece of TV history, for audiences less familiar with – and perhaps less interested in – Ball and Arnaz, Sorkin’s latest tale could fall a little flat.