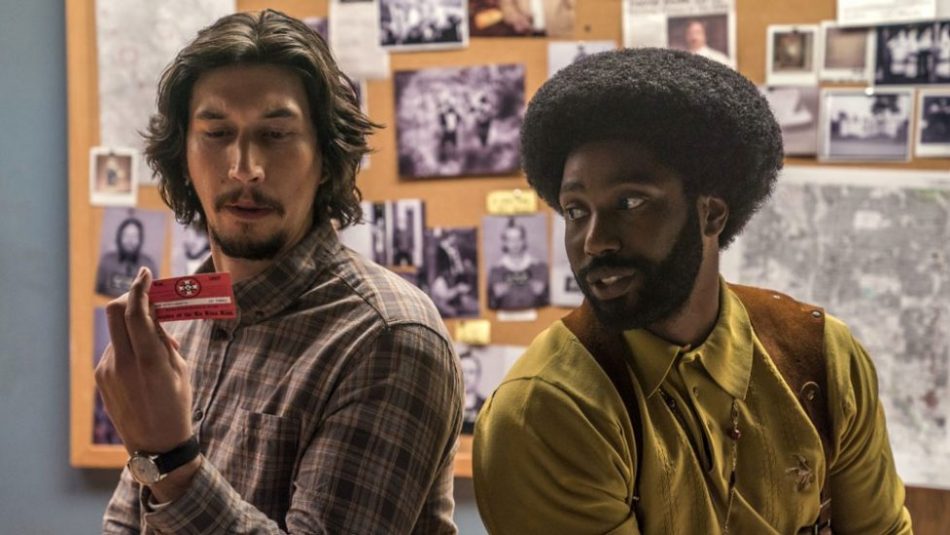 This is by no means a sign of the department becoming more open-minded – Ron Stallworth (John David Washington) suffers endless racial abuse from his own colleagues and is initially sidelined, until the police chief (Robert John Burke) needs a black officer to go undercover.

Ron is his only choice – and when things go to plan, he finds himself able to choose his next case.

Seeing an advert for the local Ku Klux Klan, he phones them up, sweet-talks them with insults about black people and over a series of calls, starts to win their trust – befriending even the Grand Wizard David Duke (Topher Grace) himself.

But things start to get complicated when the prospect is raised of Ron meeting his contacts in person. There’s only one thing to do – his partner Flip Zimmerman (Adam Driver) will have to go in his place.

Will they notice his voice isn’t the same? Will they twig that Flip hails from the only section of society that the KKK hates as much as black people? And is this going to be any more than a grand prank – a publicity coup on becoming the first black klansman?

And as if he isn’t sailing close enough to the wind, Ron is dating a black rights activist (Laura Harrier) he met while undercover – infiltrating another group that hates the police almost as much as the KKK does.

This is the film Spike Lee has been waiting his whole life to direct. It’s not so much a true story, as – in his own words in an opening caption – “based on fo real, fo real shit.”

The real-life story – of a black police officer becoming a highly trusted member of the Ku Klux Klan – is mind-blowing enough to have made a fascinating film on its own, so it’s a bit disappointing that Lee has felt it necessary to add a love interest here and tweak his sidekick there.

Most viewers won’t be familiar enough with the details of Ron Stallworth’s story for this to present a problem and Lee’s latest “joint” is never anything less than a taut thriller, peppered with the darkest of humour and the sharpest of satire.

In his first leading film role, Denzel Washington’s son, John David, delivers a tremendously confident and charismatic performance and Adam Driver is at the top of his form as the Jewish side-kick who, himself, gets uncomfortably close to having his own background exposed – literally.

In the unlikely event that you might not guess Spike Lee’s political persuasion, he’s sprinkled Donald Trump catch-phrases liberally thought the dialogue of the white supremacists and famously offered the reassuring words from a naive character that no-one would ever elect someone like David Duke to political office.

So far so clever, if not particularly subtle.

But while he manages to bite his lip for the entire narrative, he lets rip afterwards, editing together footage from last year’s Charlottesville riots, in which an anti-fascist protestor was killed by a white supremacist.

Lee fairly – rightly – and bluntly highlights the fact that four decades on from the small victory in the broader war against racism depicted in this film, there’s still a big problem in parts of America – and using the clip where President Trump insists that there were bad people on both sides, Lee is using a megaphone to argue that the White House is one of those parts. He also shows the modern-day David Duke calling on his supporters to back Trump in the 2016 election campaign.

But it’s clearly not the case that racism went away for the eight years of Barrack Obama’s presidency and returned only in January 2017. And by claiming that because David Duke backed Trump (over Hillary Clinton), it follows that Trump supports the Ku Klux Klan, one could similarly argue that with the British far right and David Duke himself coming out in support of Jeremy Corbyn’s 2013 comments about some Zionists lacking a sense of “English irony,” the Labour leader must support both the BNP and the KKK.

With Black Klansman – or BLACKkKLANSMAN, as it’s written – cleverly nodding to his views during the course of an incredible – in both senses of the word – narrative, Lee has produced one of his most provocative yet entertaining films in years. But by tagging on a predictable rant – that might have sat more comfortably at the end of last year’s Detroit – he’s proceeded to whack you over the head with a frying pan, just in case you didn’t get it. A subtle caption over a still-frame photograph from Charlottesville would have given the same message without having audiences leaving the cinema angry – either angry at Donald Trump or angry that Lee’s anger towards Donald Trump has soured the enjoyment of an otherwise intelligent thriller. This film should be able to be enjoyed by everyone – and telling Trump supporters that they are racist is perhaps not the best way to win people over to your cause.

The result turns a mainstream film with a powerful message into a facebook-style echo-chamber that preaches to the converted.

It’s a powerful conclusion – but the narrative element of BLACKkKLANSMAN itself was similarly powerful. Lee wanted to show that this four decade story was every bit as much relevant in today’s America, but I got that from the film, Spike. This coda means people are not leaving the cinema thinking about the highly accomplished, politically-charged thriller they’ve just spent two hours watching,  but the problems of modern-day America – and Lee’s views of those problems. This is obviously what he wants you to be thinking about – so in that sense he succeeds – but does he want you to be thinking that at the expense of the movie he’s been toiling over for so long?

In all truth, he’s so passionate about this cause, he probably doesn’t even care about his film as anything other than a mouthpiece with which to bash the President. There are certainly cheaper – but less entertaining – ways to do that.