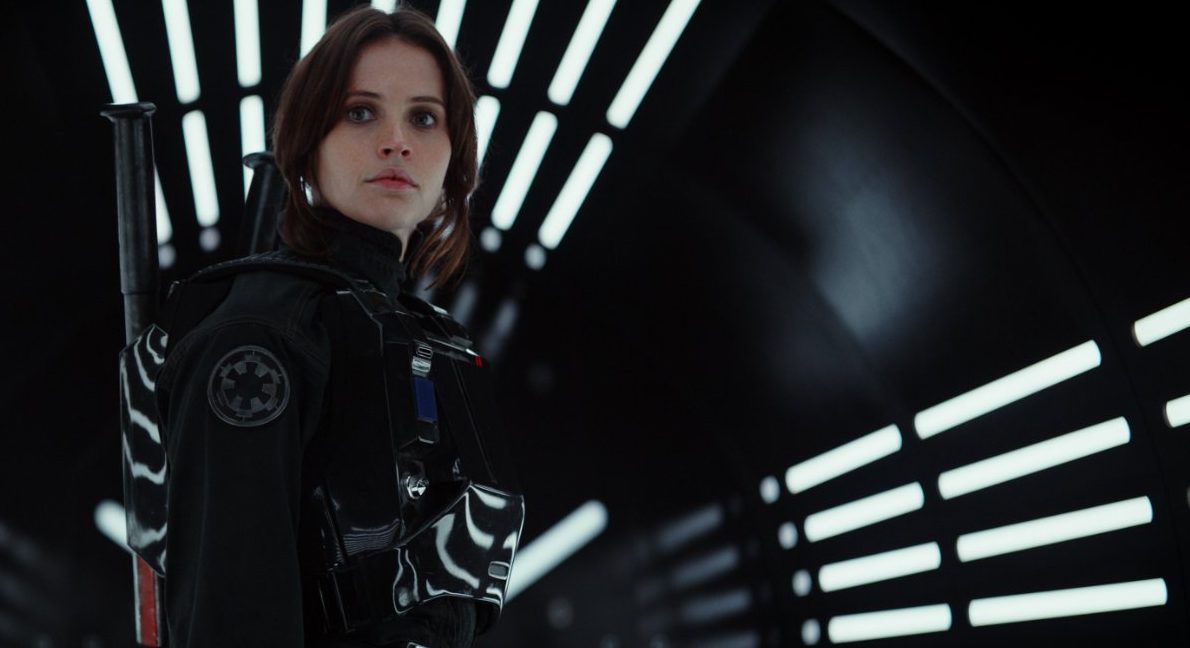 Set just before the beginning of the original Star Wars film (Episode IV: A New Hope), it opens with Galen Erso (Mads Mikkelsen in stoic form) being captured by the evil Orson Krennic (Ben Mendelsohn) and forced into helping the Empire build their ultimate weapon of mass destruction the Death Star.

His young daughter Jyn manages to escape and is raised by Saw Gerrera (Forest Whitaker) who subsequently leaves the Rebellion to form his own militant splinter group, although very little is made of this fact.

Fifteen years later, Jyn has transformed into Felicity Jones, who leads a band of unlikely heroes (Diego Luna, Donnie Yen, Wen Jiang and Riz Ahmed) on a mission to steal the plans of the Death Star and hand them to the Rebellion so they can destroy it.

After confusing sequels and prequels comes the first of the Star Wars stand-alone films, which is a much darker and murkier affair.

It explores the rise of the fascist Empire and how ordinary people do extraordinary things in order to dispel the shackles of an oppressive regime.

They do it without the help of the Jedis, who are conspicuous by their absence.  However let’s not forget this is a Star Wars movie so there are enough Easter eggs and ties to the franchise’s mythology to keep die hard fans blissfully happy.

Felicity Jones makes a worthy tough heroine who is more a cross between Rey and Han Solo than Princess Leia. Her transformation from a survivalist, living on her wits, to a key player in the Rebellion is organic and believable.

Her cohorts, though, come across as two dimensional and totally dispensable.  The film’s rare light relief is provided by the resident wise cracking and sarcastic android robot K-2SO (voiced by Alan Tudyk) plus a blind warrior (Donnie Yen), who kicks storm-troopers ass as he lets his belief in the force guide him.

There is no question that British director Gareth Edwards (Monsters and Godzilla) delivers a visually spectacular action packed spin-off with all the hallmarks of the franchise.

The battle scenes in the third act look stunning in IMAX 3D if a tad fast and furious and dare I say repetitive.  One of the film’s jaw-dropping moments is certainly the resurrection of Peter Cushing as the ruthless Grand Moff Tarquin thanks to the technological advances in digital effects. It is a chilling performance from the master of horror, though in real life he was the perfect gentleman and the sweetest man (having interviewed him on two occasions).

Since it was a Star Wars spin off, I expected it to go rogue, being supposedly free of the constraints of the franchise but alas no. For this is in fact a prequel masquerading as a standalone film which brings the story full circle back to the original 1977 film and shows that the force is certainly strong with this one.