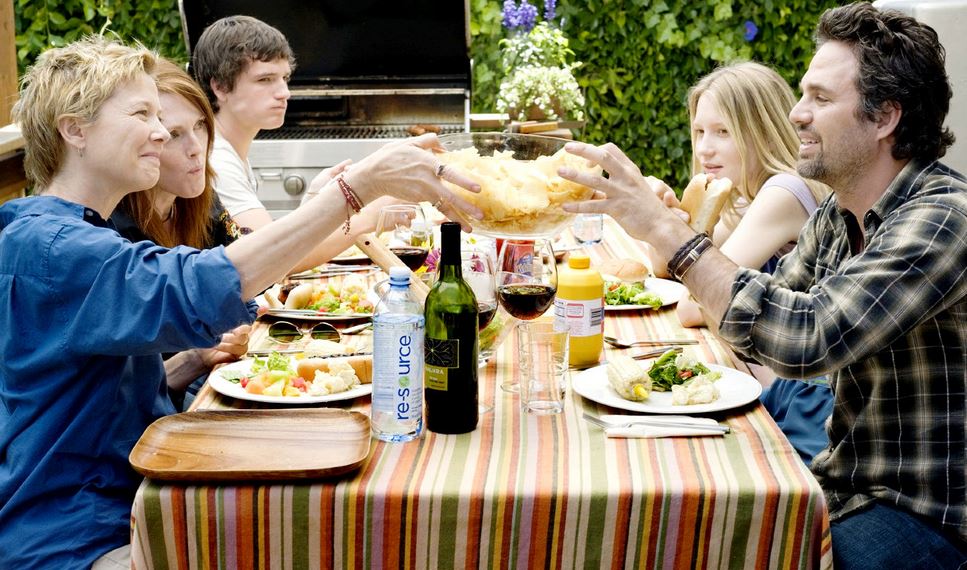 This isn’t your typical middle-American family, but it could well be, they way they carry on.

Over the years, free-spirit Jules (Julianne Moore) has aspired to many things – right now, she’s an aspiring landscape gardener.

Nic (Annette Bening) is much more secure in her profession – she’s a successful surgeon.

They’ve been married for years and now have two teenagers, one each, using sperm from the same, anonymous donor.

When Joni (Mia Wasikowska) reaches eighteen, her younger brother Laser (Josh Hutcherson) persuades her to put in an application to find their father. Before long, local restaurant owner and organic allotment owner Paul (Mark Ruffalo) is shocked to get the call.

Behind their mom’s backs, Joni and Laser meet Paul for a one-off coffee, but they end up meeting up again and again. And when Jules and Nic find out, they insist on meeting him too.

The more time Paul spends with the grown-up children he never knew he had, the more he wants to become a real father to them, but their mothers aren’t too excited about the idea of this strange man just walking into their lives out of nowhere.

Things are complicated further when Paul offers Jules her first job, designing his garden, and then Paul and Nic realise they share a love of Joni Mitchell.

Somehow, the addition of a father to this already unconventional American family makes you realise how normal it had been with two mothers.

What lifts this film above the crop of family dramas are the performances – universally outstanding. This film is sure to be showered with acting nominations, at the very least, come awards season.

Annette Bening’s prim, no-nonsense Nic is beautifully balanced by Julianne Moore’s hippy-lite attitude – with both women able to display a blend of strength and vulnerability, where required.

There are enough male and female emotions on show to keep any family going.

But Mark Ruffalo, whose Paul has his comfortable existence torn to shreds by the shock discovery of his two teenaged kids, is remarkable, as he struggles to come to terms with the development.

The relationships develop as organically as the vegetables Paul grows to use in his restaurant. Although most of us would never conceive of being in such a family environment, it feels so real.

What’s particularly impressive about this lightly comic extended family drama is that without exception, you care about everyone. Paul is prepared to step up to the plate and accept the responsibility he never thought he’d have to face. Jules is excited by the prospect of letting the kids explore this new influence in their lives. Even when Nic is being stern and disapproving, you know she has her kids’ best interests at heart.

And as the drama develops and characters start doing things that we all really know they probably shouldn’t be doing, they manage to keep the audience with them, because they’re all so likeable.

It’s unusual to be able to create such dramatic tension without having stereotypical good-guys and bad-guys – it’s possible to have a tumultuous but ultimately rewarding life without there being any inherent badness to challenge the goodness – and it’s possible to make a film that tugs on the heart-strings and challenges your emotions, while being entertaining and believable.

Lisa Cholodenko has created a family whose draw almost no-one could resist. You’ll want Paul to be your Dad, you’ll want Nic and Jules to be your Mums and you’ll be perfectly happy to have Joni or Laser as your kids.

It’s rare to find a film that it’s so difficult to fault.

If I had to find some reason not to give it 5 stars, I might suggest that while the characters, performances, dialogue and story all work to perfection, as a piece of cinema it doesn’t give itself the chance to jump off the screen, being little more than a bunch of people talking to each other in locations as everyday as houses, gardens and restaurants.

And ultimately, by making a family with two mothers seem so normal, it almost detracts from the drama, because many of the choices characters are forced to make don’t seem so different from things we’ve seen in other films or even in our own lives.

But there’s no question – these kids are more than just all right.