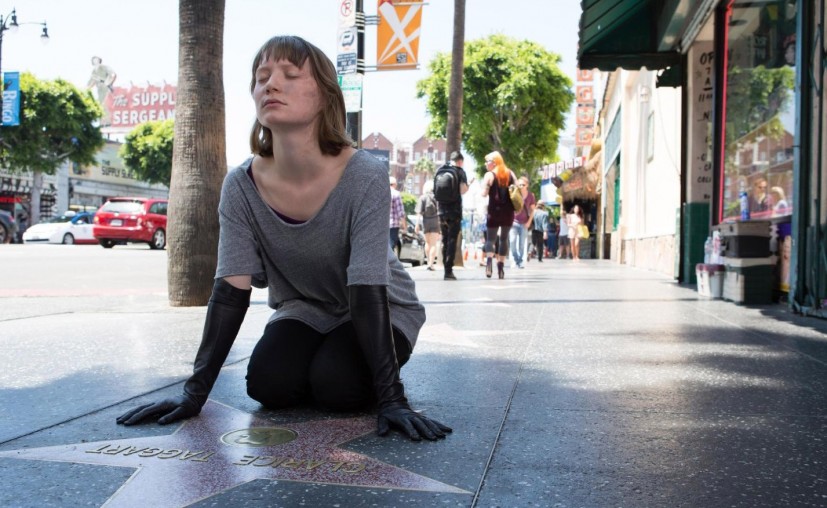 Agatha (Mia Wasikowska) is returning to Hollywood after a few years away. Her long gloves and signs of historic burns under her bobbed hair give clues as to why she left – and hint at why some people won’t be too happy to see that she’s back.

Her past ties her to a precocious thirteen year old child star Benjie (Evan Bird) and his parents Christina (Olivia Williams), his manager, and Stafford (John Cusack), a new age Hollywood shrink and self-help guru, with a handful of unorthodox tricks up his sleeve.

One of his most high profile patients is the aging actress Havana (Julianne Moore), who is finding it harder to get those plumb roles as her advancing years are increasingly leaving her on the shelf.

As a sign of what a small world Hollywood really is, Agatha happens to get herself a job as Havana’s personal assistant and the first person she meets when she gets back to town is Jerome (Robert Pattinson), a limo driver who really wants to be an actor – and has just got himself a small role in a production that’s shooting on the same lot as Havana.

Will Agatha be able to navigate her way through the two incendiary situations she finds herself in; Benjie’s frenetic family and her neurotic new boss?

David Cronenberg is clearly no stranger to the film business, although he’s always made efforts to remain an outsider when it comes to the Hollywood machine. So when he visits the heart of the movie business, he’s not basking in the glow of golden light, reflected off the shimmering surfaces of the many awards handed out in the city.

But to suggest that everyone in Hollywood is miserable, depressive, has a dark past and no future is somewhat disingenuous. Cronenberg’s portrayal of the City of Angels would have us believe that everyone in Hollywood either wants to kill themselves, someone else – or at the very least, a pet. But the revelation that some people in LA aren’t happy is hardly a surprise. It is also the case, in reality, that some people both enjoy the LA life-style and are not corrupted by it.

Billed as a satirical side-swipe at Hollywood, there’s very little satire here; it might be a sign of the times, but it’s not satirical to observe that people might find jobs through contacts made on twitter, that producers might prefer youth to wrinkled experience, that big names don’t like to audition, that you don’t have to be over the hill to have addiction problems, that some people in the city have psychological issues or that stars might delight in the misfortune of others if it benefits them.

The film works better as a thriller, as viewers try to unpick Agatha’s past and predict the consequences of her return, but even here, Cronenberg at times goes so far over the top that it jars, not that you would expect subtlety from him. And he weighs down two of the main characters with ghosts from their past – one could be an interesting conceit, but two just seems like a lazy director, running out of ideas.

Set, essentially, around one family and a handful of hangers-on, the pool of characters is far to small to be making any generalisations about Hollywood – it says almost nothing new about anything – and the narrative is a somewhat depressing and unrewarding journey with a group of thoroughly unpleasant, self-obsessed losers.