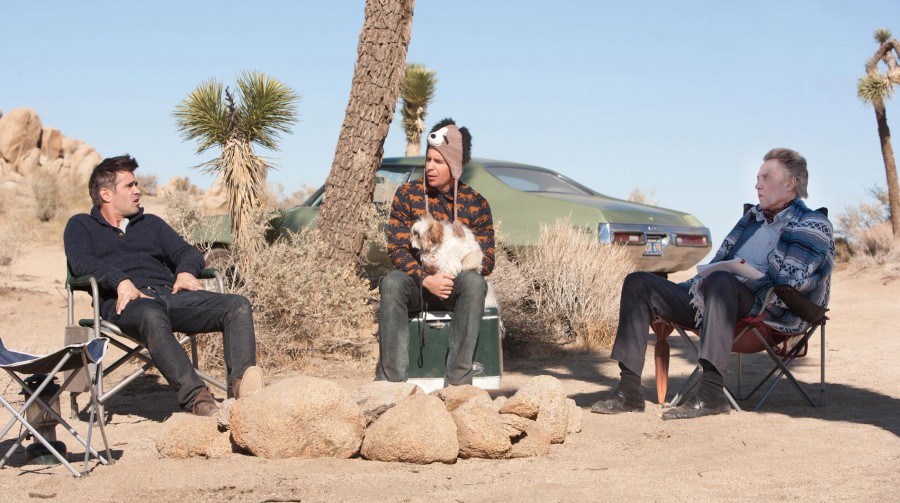 Marty (Colin Farrell) is an Irish screenwriter, struggling to make it in Hollywood. He’s looking for inspiration for his new film, Seven Psychopaths. All he has is the title and the determination that despite that title, it shouldn’t be violent.

His best friend Billy (Sam Rockwell) tells him about a couple of psychopaths he’s heard about – a masked, cold-hearted hitman who leaves a Jack of Diamonds calling card with each victim and a preacher, determined to avenge his wife’s murder.

Newly invigorated, Marty sits down to write, but as with so many aspiring writers, real life keeps getting in the way; on this occasion, he gets caught up in the shenanigans of Billy’s friend Hans (Christopher Walken), who makes a living stealing rich people’s dogs and then collecting the reward money when he returns them. Hans has just stolen the cuddly shih tzu of crime boss Charlie (Woody Harrelson), a man whose respect for the lives of others is so slight that his face would almost certainly appear in the dictionary beside the word ‘psychopath.’

It’s been a four year wait for In Bruges director Martin McDonagh to follow up with his second feature, which – it turns out – was the first one he wrote. This fact wouldn’t come as too much of a surprise, as it feels like a first film, loaded with visual gags, fractured time-lines, wiseguys, women, guns, dogs, cars and a huge ensemble cast of big hitters. It almost feels like it’s the vision of a director who’s worried that if he doesn’t get all his ideas out in his debut, he might not get another chance.

It’s almost a shame, since McDonagh, as In Bruges showed us, is certainly talented enough as both a writer and director to have had more confidence in his oeuvre and could have made a little more effort to make a more focused feature.

That said, there’s no denying that it’s tremendous fun – an effective blend of comedy and violence that would sit comfortably alongside Tarantino’s early work – fractured time-lines, wiseguys, guns and an enemble cast, anyone?

There are great performances all around, from Colin Farrell’s wide-eyed writer and Sam Rockwell’s hyperactive sidekick to Woody Harrelson’s manic mafioso and Christoper Walken‘s veteran small-time crook. But it’s the smaller parts that make this film particularly notable, with cameos from actors of the stature of Michael Pitt, Michael Stuhlbarg, Harry Dean Stanton, Gabourey Sidibe and Tom Waits.

Seven Psychopaths is riddled with Hollywood in-jokes, to the extent that you wonder whether they’re meant for audiences or fellow-film-makers; everyone involved – not least McDonagh himself – is clearly having fun. The British auteur in the US, makes a British film that looks American, centred on an Irish protagonist who even shares his own name.

But even if the industry satire goes over the heads of most viewers, the knockabout violence feels familiar and the structure is somewhat arch, the gags come quick and fast, the humour is sharp and the action is tense and skillfully handled.