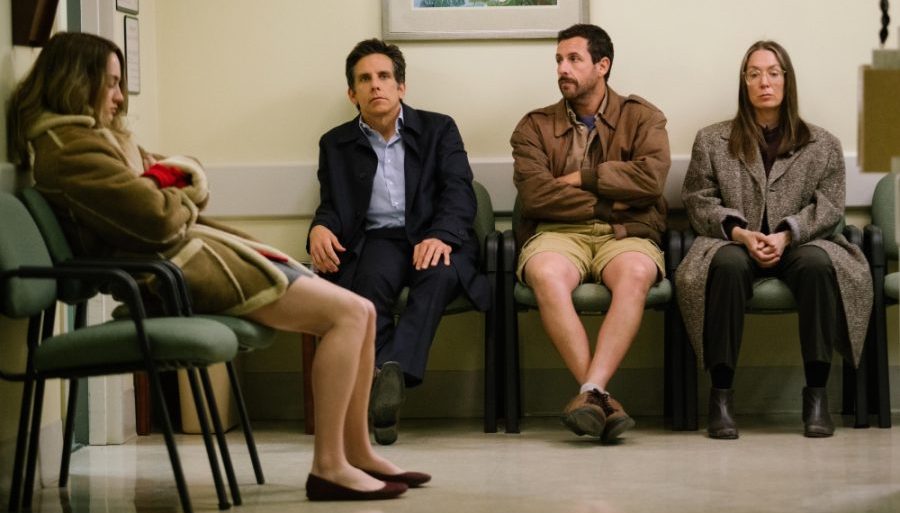 Harold Meyerowitz (Dustin Hoffman) is a cantankerous old sculptor whose grumpiness comes as much from his disdain at how the art world hasn’t given him the adulation he deserves as it does from his disappointment in his children – not least that none of them has become an artist, like him.

From the point of view of his son Danny (Adam Sandler), a frustrated musician, that’s not through lack of trying; his film-student daughter is making a better fist of it than he is.

His half-brother Matthew (Ben Stiller) lives about as far away from the rest of his family as he can, on the west coast. He’s a successful businessman, but his success means nothing to Harold.

Harold’s alcoholic umpteenth and latest wife (Emma Thompson) hasn’t really been accepted by his children and his daughter (Elizabeth Marvel) quietly fades into the background, stepping forward only to offer the kind of common sense that the situation requires.

When illness coincides with the planning for a long overdue retrospective of Harold’s work, the whole family is drawn together with their clashing personalities trying to reconcile their differences, as they go through the motions to do the right thing, with duty, nostalgia, loyalty, selfishness, resentment, jealousy and maybe just a little bit of love and respect thrown into the mix.

Anyone familiar with and partial to Noah Baumbach’s back catalogue will be neither surprised nor disappointed with what he delivers this time; another bitter-sweet family saga of eloquent know-it-alls jostling for position.

This highly accomplished drama – with sharply incisive comic undertones – neatly judges the relationships between Dustin Hoffman’s increasingly cantankerous patriarch, his mismatched children and the next generation.

Exploring themes of shame, guilt and regret, it’s a mature and thoughtful film that will resonate particularly with anyone with children, anyone with siblings, anyone with parents or anyone who’s had more than one marriage.

Told, as the title might suggest, under a number of separate chapter heading, Baumbach’s script is skilfully brings in new characters and unexpected situations when required, without the audience feeling they’re being manipulated.

Casting two actors best known for their comic roles – Adam Sandler and Ben Stiller – as the half-brothers at the heart of the film enables the often comical elements of the difficult experiences to strike the extended family to seep to the surface almost by surprise, and catching viewers out. Dustin Hoffman’s cutting delivery is more than a match for the pair. “I shouldn’t really be laughing at this,” is a phrase that will be ringing around your head.

At a press conference after the film’s screening in Cannes, Emma Thompson hit the nail on the head when she addressed the extent to which the film is both funny and sad, noting that often the funny bits are not the superficial bits. “That’s what life is like,” she added.

After such films as Baumbach’s own Greenberg and While We’re Young for Stiller and Punch Drunk Love for Sandler, a film like this makes you increasingly respect the pair as actors, rather than comedians.