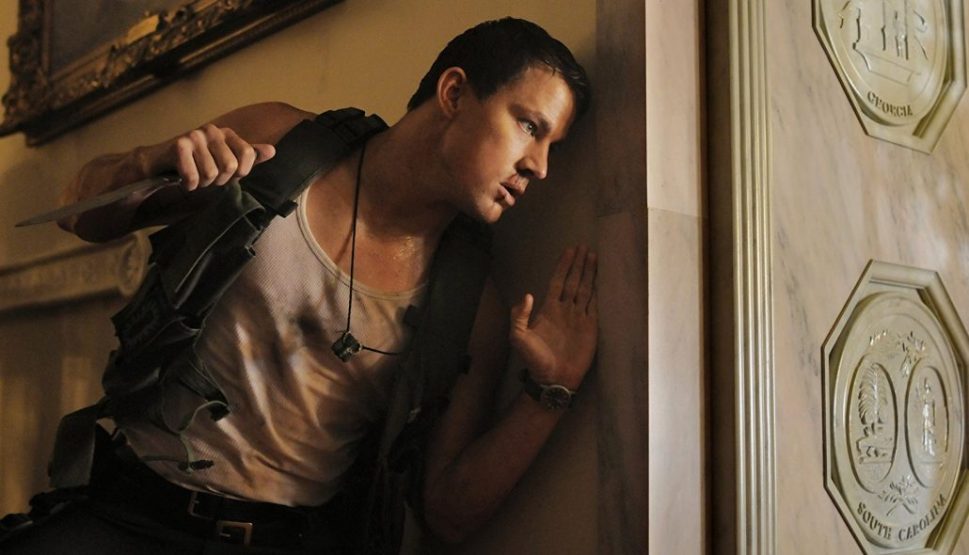 In an attempt to reconnect with his estranged teenaged daughter Emily (Joey King), former marine John (Channing Tatum) takes her with him to a job interview at the White House; he’s hoping to get onto President Sawyer’s (Jamie Foxx) protection detail, but his reputation precedes him and he misses out.

Since he’s there, he and his daughter tag along with a White House visitor tour, but they’ve picked the wrong day; a group of heavily armed men burst into the heart of American government to try to take the President hostage.

Despite being turned down for a presidential protection job, John gets separated from the group and finds that he’s the only man who can save the President from a gang, whose first demand is millions of dollars and a helicopter to safety.

But it soon becomes clear that the men behind the raid want more than money, and as they take over the White House, the prospect of a global nuclear war gets closer.

Suddenly, keeping the president alive is only the start of John’s troubles.

John is the wrong man in the wrong place at the wrong time, as a group of heavily armed terrorists burst into the building – I’m not talking Die Hard, although I might as well be. But it’s not even the first “Die Hard in the White House” of the year. Back in April, audiences had the chance to ignore the critically panned Olympus Has Fallen and now Roland Emmerich is having his turn.

From the man behind Independence Day – there’s even a gag referring to it – it’s not surprising that the film doesn’t hold back with its action sequences; one man trying to protect the world from a nuclear-bomb-toting terrorist gang, with the firepower of a small army as cars, planes, helicopters and entire buildings are destroyed with abandon.

The film is surprisingly humorous, at times even slyly satirical – within moments of the siege breaking on the news, one TV commentator barks with certainty that “it’s definitely the work of Al Qaeda.”

The film is actually as enjoyable as it is silly up to a particular point, after which everything begins to crumble – in TV parlance, the film jumps the shark, after which, a succession of twists send White House Down spinning out of control like a helicopter that’s just been hit in the rotors by an surface-to-air missile.