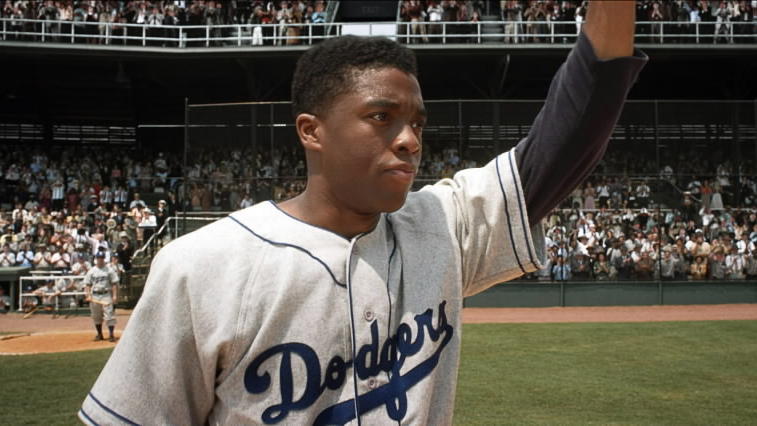 The Second World War has just finished. Black Americans fought bravely alongside their white compatriots, but in peacetime, back home, they have been relegated to second class citizens once again.

Nowhere is this more starkly obvious than on the baseball diamond. The black players have their own league, and the idea of a black player even setting foot on the same field as his white counterparts was beyond the wildest imagination of everyone other than the Brooklyn Dodgers owner, Branch Rickey (Harrison Ford).

Whether it’s for moral or financial reasons, he risks the wrath of the public, the sport’s officials and his own players by signing up the best of the black players, Jackie Robinson (Chadwick Boseman) to play in the major league.

Assimilating a black man into the top flight was never going to be easy – with some hotels refusing to accommodate the team while some rival teams shouted abuse from the dugout – but as long as Jackie could hold his nerve, and his temper, he could change America’s favourite game forever.

With a big number 42 on his back, Jackie Robinson might have been the first black player in the modern era of major league baseball, but this is far from the first film about the first black person to do this or that – so while this worthy and historically significant, it feels awfully familiar. The same arguments are rehearsed, meeting similar objections from the usual suspects.

Nevertheless, Branch Rickey’s determination to change the sport – and the world – while making a bit of extra money on the side, of course – is as fascinating to watch as it is admirable. Harrison Ford’s cigar-chomping growl feels like any number of big screen politicians, journalists or gang bosses, but he’s clearly having fun and takes the audience with him. Although he preaches that “You make me love my sport again,” the film is perhaps a little disingenuous about the extent to which financial reward might have played into Rickey’s reasoning. Rickey was a good man, but not a stupid one.

Such reassuring encouragement as “You’re like medicine – people don’t like you, but you’re good for them” and “One day, we’ll all wear number 42 and then no-one will be able to tell us apart” raise the spirits and put in context how much has changed in just a few decades.

But having just marked the 50th anniversary of Martin Luther King’s “I have a dream” speech, it’s notable that even though Robinson was eventually accepted in the major league and followed by a number of other black players, fifteen years later, African Americans were still fighting for their rights outside the baseball diamond. And even now, with an African American family living in the White House, many will argue that they still don’t have the same opportunities as their white neighbours. It’s interesting, too, that it took a white man to bring the story to the big screen – is this because black directors don’t have the power in Hollywood to tell their own stories or because they don’t want to get type-cast into making black films?

Having said that, despite the film being full of cinematic short hand, sometimes leaving audiences feeling preached to and almost slapped around the face with righteousness, it’s very likeable and uplifting and it’s very much aimed at white audiences as it is black ones. Equally, knowledge of or interest in baseball aren’t required to follow the debate about social change.

But for a film that’s so inherently dramatic, it’s oddly pedestrian; any element of tension is knocked down as soon as it’s set up – a player receives a letter threatening him, the owner shows him dozens of similar letters – a player notes that he never showers with them, so he showers with them – there’s a threat against the house where they’re staying, so they move out – so the narrative feels weak, which is a disappointment for what should have been such a riveting story.

In this sense, Brian Helgeland seems more interested in getting across a worthy message than providing a drama to engage audiences. But he will lift your heart and he will get you thinking – not least “Where on earth has Chadwick Boseman come from?” How does someone go from being little more than an unknown TV day-player to carry such a big Hollywood film, with gusto.