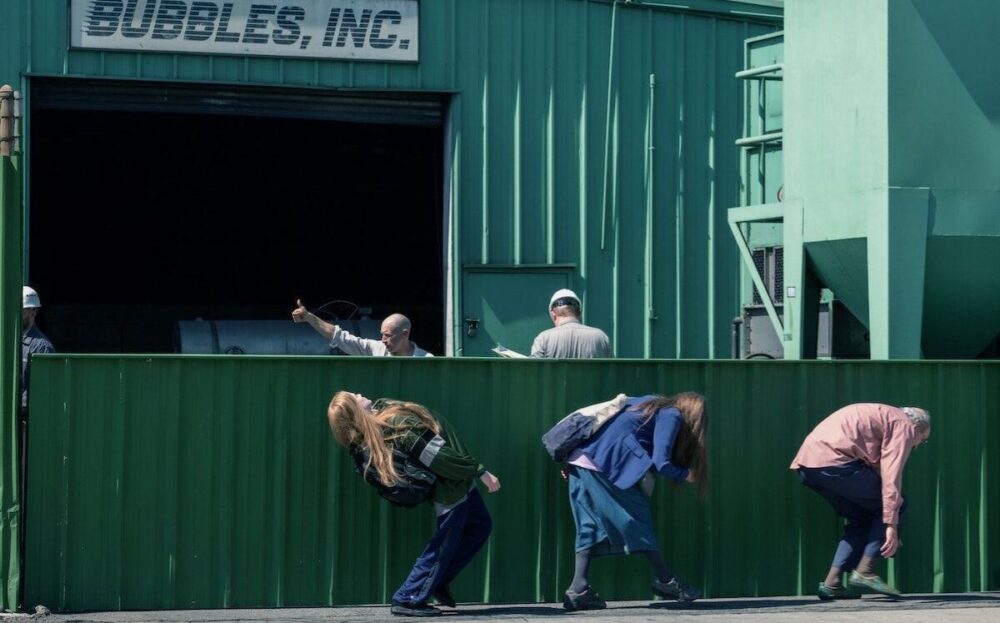 There’s always a scam going on; their current efforts are geared towards raising enough cash to pay their rent for the dilapidated office they live in, beside a bubble factory.

When all else fails, Old Dolio comes up with an insurance scam that involves the family flying to New York and “losing” a suitcase on the way back.

On the plane, they meet a single young woman Melanie (Gina Rodriguez), who earns their trust and is invited into the gang.

But rather than helping their scams run more smoothly, Melanie ends up having a more unexpected impact on the family.

There are few auteurs in the film industry these days whose work is so idiosyncratic that within seconds, you’d have a pretty good idea whose film you are watching; Miranda July is one.

From the opening scene – in which the family are preparing to launch a raid on a mail-box centre – to the march back to their home, trying to escape the view of their landlord – to the daily routine or clearing pink bubbles that seep down the rear wall – each scene sets a new benchmark for quirkiness, verging on the surreal.

Richard Jenkins is clearly having fun as he delightfully overplays his character, while Evan Rachel Wood’s protagonist underplays her dialogue while delivering a peculiar combination of flighty acrobatics and sullen, sunken, miserable teenager.

The only character in the film who seems to be grounded in any sense of normality is Gina Rodriguez’s Melanie – the catalyst for change that this peculiar family requires.

If you can get over the whimsy, one problem is that Old Dolio, at the centre of the story, isn’t a particularly empathetic character – while viewers might understand her arrested development and identify with her realisation that perhaps her parents haven’t done as good a job of bringing her up as she might have previous thought, her behaviour – not far removed from Harry Enfield’s Kevin the Teenager – makes it hard to root for her.

One part coming-of-age (26 year old Old Dolio), one part fish-out-of-water (Melanie), one part family drama, one part crime caper, every part so quirky as to be arch.

If you’ve liked Miranda July’s other work, such as her impressive debut Me And You And Everyone You Know or her less successful follow-up The Future, you might just have the patience to let her get away with what she delivers this time – but for many viewers, it’ll be an inexcusable quirk too far.

If she carries on pushing the boundaries just a little too far, it’ll be a while before Miranda July can expect to become a kajillionaire from her film-making.