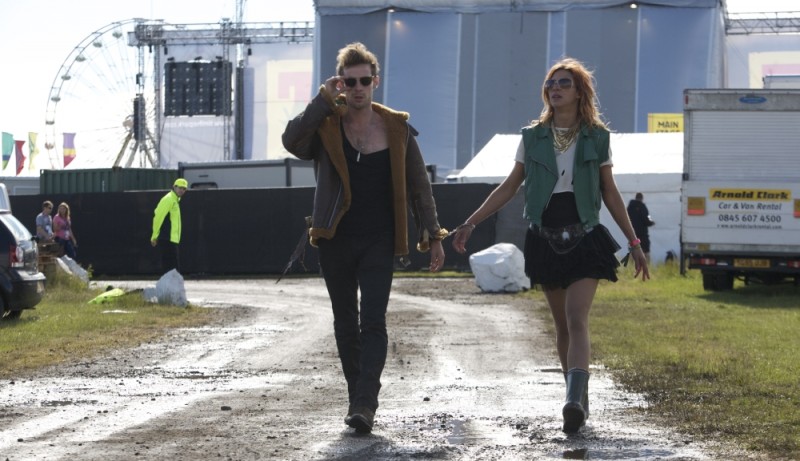 As the T In The Park music festival is kicking off in remotest Scotland, American rock singer Adam (Luke Treadaway) and his sidekick Tyko (Matthew Baynton) are set upon by a girl group as they finish a TV interview.

The girls’ leader Morello (Natalia Tena) tries to run off with Luke’s guitar, as what starts off as gentle teasing soon becomes quite unpleasant.

A passing security guard steps in to try to break up the brewing fight, but when getting everyone to hold hands in a circle doesn’t calm them down, he tries something more dramatic – something which, from his sneaky look of self-confidence, he’s probably tried before: he hand-cuffs Adam and Morello together and disappears into the crowd with the key.

All of which would be fine, ish, if it weren’t for the fact that the girl group have a gig coming up just hours later – and the boys are due to play the main stage the following day.

Can they find the man with the key or are they going to have to learn to live with each other?

This looks and feels like a low budget film – so low, in fact, that it was shot entirely at one location – last year’s T In The Park festival – and all the extras came free, in the shape of festival-goers.

If it weren’t for the fact that it the producers managed to persuade the organisers to let them have a couple of stages, while the audiences were there, you’d almost think the entire budget went on buying festival tickets for the cast and crew.

It doesn’t take a brain bigger than a pop-star’s to work out where this film is going, from the moment our two leads are cuffed together; it follows a pleasingly brief and inexorable path that takes in all the usual, predictable plot twists.

The initial frisson is tempered by the arrival of his girlfriend and her boyfriend, but despite – or perhaps because of – the gigs they’re forced to share with each other, it’s only a matter of time before they decide they want – well – you know the title.

This being the case, You Instead feels surprisingly fresh and David Mackenzie’s brisk pace makes it as easy and effortless to watch as it is light and enjoyable.

Treadaway makes a convincing enough American rock-star and Tena delivers the right blend of adorably cheeky, immensely annoying and totally cute. And although they form more than just the core of this film, Mackenzie makes good use of his supporting cast.

There’s no question that the catalyst for the story – the two main characters being hand-cuffed together – is rather contrived, but if you can get past that device, this delightfully frothy and unchallenging romance unfolds like a charm.

There’s very little to it – a simple and unpretentious, linear narrative, following two simple and pretentious singers and their hangers on – with a script that feels like it was being made up as they went along, which isn’t a bad thing in a film which is striving for documentary-realism.

From the blossoming central relationship and the sympathetic sidekicks to the rousing – if astonishingly formulaic – denouement, You Instead is a light and heart-warming love-letter to music festivals and straight-forward film-making that leads you on a simple journey and tugs on the right heart strings.