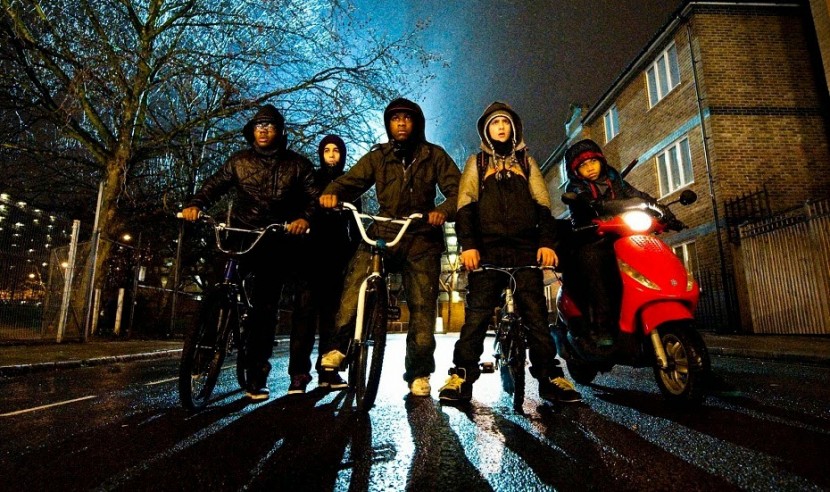 Sam (Jodie Whittaker) is mugged at knifepoint by a gang, on her way home to her flat on a Brixton housing estate. More stunned than battered, she stumbles back with the help of an elderly neighbour.

Meanwhile, the gang, led by Moses (John Boyega), heads off to create more chaos. As the ruffians prowl around the neighbourhood, looking for their next victim, something shoots out of the sky and smashes the roof of a parked car. On further investigation, inside the car, the teens find a furry alien which they chase, kill and keep as a trophy. None of them can keep it at their own flat – their parents wouldn’t want a dead alien at home – so they take it up to the flat of the local drug king-pin Hi-Hatz (Jumayn Hunter), which is guarded by stoned henchman Ron (Nick Frost).

Before long, dozens of larger, more violent furry aliens descend from the heavens to retrieve their lost soul.

Before long, the gang have to reconcile with Sam to try to stay alive. Throw in teenaged richboy Brewis (Luke Treadaway), on a mission to pick up some drugs from the hood, and the stage is set for the residents of a Brixton housing estate to defend themselves against a furry alien invasion.

This is variously being sold as “the next great British horror film,” “that film by Joe out of Adam & Joe” and “slightly disappointing.”

There’s much to enjoy for fans of the B-movie horror genre and the claustrophobic 1970s thrillers that saw invaders attacking the trapped protagonists – Assault on Precinct 13 being a prime example.

Looking at this completely objectively, you might wonder why we – as the audience – are expected to be able to root for a bunch of teenaged reprobates who we’ve already seen attack a defenceless woman at knife-point. Surely we’d think they deserve to feel the wrath of the ravenous extra-terrestrials.

Apart from to achieve the cinematic cliché of enemies uniting under peril, it’s hard to accept that Jodie Whittaker’s Sam would team up with gang that attacked her only hours earlier.

But there are some sociologically interesting touches – the teens wouldn’t have attacked her if they’d have known she lived on their estate, for example – do they have morals, however dubious? And the relationships between some of the kids and their parents are grounded very much in reality.

The aliens are quite clearly men on their hands and knees in low-budget furry suits, with some neat special effects laid on afterwards, featuring lit-up teeth in place of eyes.

From the rich-kid out of his depth to the overweight stoner and ruthless drug boss, Attack the Block is ensemble-cast by numbers in a cliché-ridden genre film.

The few known actors – just Nick Frost and Jodie Whittaker, really – don’t have much to do, as the film really revolves around the furry aliens and the youngsters, most of whom have never been on film before; some fare well – Alex Esmail as a young, wannabe Ali G called Pest is particularly enjoyable – but others are likely to slip back into the shadows of the housing estates where they came from themselves.

The motive of the aliens, when discovered, while humorous, rather removes much of the menace – they’re hardly the visitors from V or the Vogons.

You’ll jump from time to time and there are certainly some awkward laughs, but it’s not particularly frightening and it’s not trying to be a comedy – and it’s not accomplished enough to be an alien-invasion epic or original enough to create a new sub-genre.

When a perfectly pleasant and witty TV comic decides he wants to pay homage to his favourite films from his youth and his mates including the team behind Shaun of the Dead and Hot Fuzz, you can see how the film came about, but it’s not clear from this whether he was just trying to get his one film out of his system or whether he’s expecting to be launching a new career.

The jury is certainly out on his ability to develop characters and tell a story, as he doesn’t really give himself much of an opportunity to do either here.

It’s little more than a bit of harmless fun – and that it is.