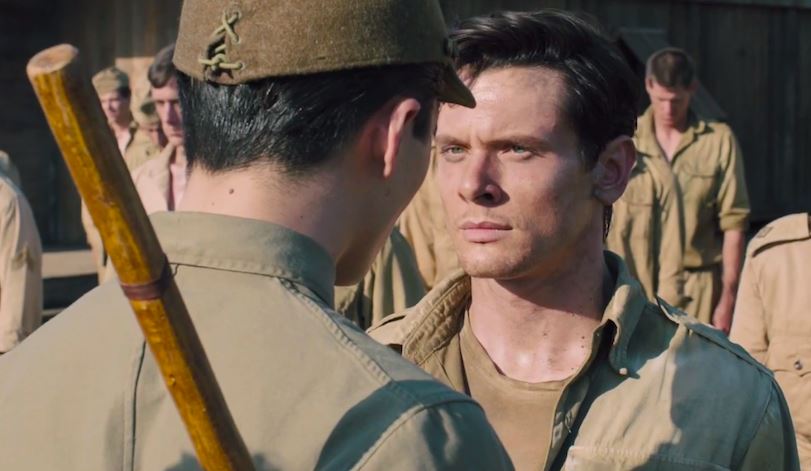 During the Second World War, American Olympic middle-distance runner Louis Zamperini (Jack O’Connell) was serving as a bombardier with the US Air Force in the far east.

In 1943, his bomber crashed into the sea. Only two of the crew survived long enough to be rescued. The only problem was, they were rescued by the enemy.

Held captive in a brutal Japanese Prisoner-of-War camp, he was assumed dead by friends and family back home. The ruthless officer in charge of the camp, Sergeant Watanabe (Takamasa Ishihara), took a dislike to Louis and took pleasure in beating and humiliating him.

With little chance of escape, Louis and his fellow prisoners knew that their best hope of getting home was simply to survive the war. Despite being pushed to the limit, physically and mentally, every day, Louis refused to give up his determination to beat the system.

On one level, Unbroken is an exciting and moving tale of an American war-hero, but when broken down into its constituent parts, true or not, each element has been done better in earlier films and there are no prizes for combining them in one film, true or not. It leaves a film that feels oddly tired.

How many times have we seen films about athletes rising from obscurity to reach the top of their game? We’ve certainly seem a film or two about America’s war effort – many of them featuring bombardiers. The past couple of years have seen Life of Pi and All is Lost as examples of protagonists lost at sea. And prisoner-of-war camps are hardly a rarity on the big screen.

Furthermore, this prisoner or war camp seems to have been toned down, somewhat. The real-life Watanabe is reported to have beaten many of his prisoners, fractured their windpipes, ruptured their ear-drums, shattered their teeth, tied them to trees, among other things – but here, he seems to reserve all his ire for Zamperini, and while his treatment of our hero could hardly be described as friendly, Unbroken suggests a begrudging respect between the pair; it’s as if they might even have been close friends had the war not intervened. This makes the stand-off between the pair seem almost more like an honourable battle of wits than a punishing example of mindless brutality.

While few people would want to share Zamperini’s experience, in this film, hundreds of fellow prisoners do – they’ll all have had their own horror story that led to their capture, they all lived in the spartan conditions at the camp and they all had little choice but to sit out the war and wait for their ordeal to end. In that sense, unlike most other prison dramas, where the protagonists might plan and attempt a dramatic escape, these inmates have a passive existence, simply hoping that one day, the Japanese will surrender and they’ll still be alive when it happens.

If the film is saying that he should have been treated better than other prisoners because he was an Olympic runner, many people might disagree. But if the film is saying that while he was singled out by the camp commander, apart from a handful of moment, many created by his own stubbornness, he wasn’t particularly any more heroic than any other survivor, you might wonder why he deserves his own film and the others don’t.

But despite questions about the narrative – which is always difficult in what purports to be a true story – the bruising existence of prisoners of war and the general story of survival are well presented but Angelina Jolie, who’s developing to be an efficient director, who can tell her story well, without putting too much of her own personality on the screen.

Having decided that – for whatever reason – Louis Zamperini was more of a hero than his fellow prisoners, she and the rising British star Jack O’Connell do an effective job of portraying his ordeal. Zamperini himself, who died at the age of 97 just months before the film’s release, did get to see an early cut and is said to have approved.

Many people familiar with the source material have criticised Jolie for telling only his wartime story and not chronicling his later struggles with anger and alcohol and his eventual redemption through religion, but when making a biopic, the most important thing to decide is which part of someone’s long life to put on film and she has at least been consistent in delivering a coherent narrative that tells a single story, rather than trying to shoe-horn 97 years into 2 hours.